In India, especially in the western and certain northern regions, there have been always been issues regarding water shortages due to the climatic and geographical conditions. Hence, step-wells or ‘Baoli’ or ‘vav’ or ‘baori’ (as it is called locally) were built as water storage systems or irrigation tanks and also as air conditioning systems in forts and palaces.

These step wells were made not just to tackle the seasonal availability of water but also for leisure purposes. Thus eventually, these ‘baolis’ were built with certain embellishments and architectural features, which resulted in them being treated as prestigious monuments long after they ceased to be in use. Many were also a part of different religious sites like temples and mosques.

Although many have fallen into disrepair, were silted in at some point in antiquity, or were filled in with trash in the modern era, some still exist. Here’s a list of few famous Baolis of India that you should visit next: 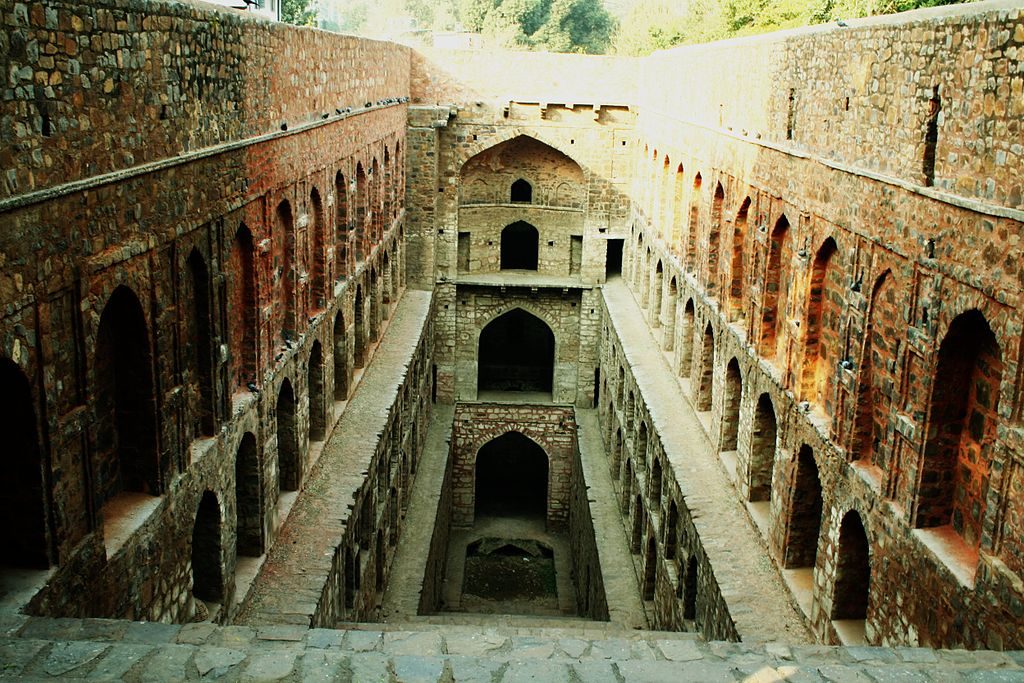 This historic step-well located on the Hailey Road in New Delhi is also referred to as Agar Sain Ki Baoli or Ugrasen ki Baoli. A mosaic of different assortment of stones and rocks, its structure is 60-meter long, 15-meter wide consisting of 103 steps made of red stone. This ancient water reservoir is a protected monument under the Ancient Monuments and Archaeological Sites and Remains Act, 1958 of the Archaeological Survey of India. Go back in time as you go down the steps and feel a drop in temperature as well. Not to forget, this site is also known to be one of the haunted places in India. According to legend, the black water of the well lures people in and leads them to drown themselves here.

Literally translating to ‘Queen’s Stepwell’, Rani Ki Vav is believed to be the grandest stepwell in the state of Gujarat. Constructed in the memory of King Bhimdev by his widow, Queen Udayamati, around 1050 AD, this 900-year-old structure now is a UNESCO World Heritage Site. It is located in the town of Patan in Gujarat, on the banks of River Saraswati and is displayed prominently on the new ₹ 100 currency note issued by the Reserve Bank of India. The magnificent structure of this distinctive form of water storage system epitomises the peak of Maru-Gujarat architectural style. It is designed in the shape of an inverted temple, divided into seven levels, highlighting the sanctity of water while the steps are quite wide and ornately carved with various gods and goddesses.

The small village of Lukkundi is another marvellous ruin of history and is located between Hospet and Hampi. This hidden gem is known for many Chalukyan temples and therefore boasts some of the most magnificent Indian architectures. The entire complex of Lukkundi is dotted with around 100 Chalukyan style step-wells, each unique and popular in the area for its architectural beauty.

This architectural marvel and a major tourist attraction site is one of the oldest and most beautiful landmarks in Rajasthan. Located in Abhaneri village of Rajasthan, with its 3,500 narrow steps over 13 storeys, Chand Baori is not just the most visually spectacular stepwell in India, but also one of the deepest and largest. It was built between 800 and 900 AD by King Chanda of the Nikumbha Dynasty and even today boasts of the amazing mathematical precision and the ancient Indian sculptural style of the bygone eras. Maintained by the Archaeological Survey of India, Chand Baori attracts many tourists from all around the world for its magnificence.

Also, Read 12 Things you must not miss when visiting Rajasthan

Pushkarini literally translates to a temple tank. Located near Mahanavami Dibba in the Royal Center of Hampi, Karnataka, Hampi Pushkarini is famous for its Chalukyan architecture. The stepwell is perfectly geometrical, devoid of any elaborate carvings and was built in the 15 century by the Vijayanagara Dynasty. Its unique feature is that the water tanks are connected to an extensive network of stone aqueducts and canals, very similar to the ones used by Romans. The beauty of Hampi Pushkarani lies in its symmetrical architecture which is constructed using finely finished blocks of black schist stones.

Situated in the Mehrauli Archaeological Park in the capital city- New Delhi, Rajon ki Baoli is one of three step-wells in Mehrauli; the other two being Gandhak ki Baoli and Anangtal Baoli. Biggest amongst the three, it consists of four levels, with stairs leading to the bottom of the pool; the enclosure also contains a mosque and a tomb. Supposedly built during the Lodi era by Daulat Khan, it is dedicated to the Rajons (masons) and was restored in the early 2000s.

Similar to ‘Rani ki Vav’ in Gujarat, Rani Ji ki Baori or ‘Queen’s Stepwell’ in Rajasthan is a stepwell located in Bundi, Rajasthan. With around 50 tanks (or Baolis) in Bundi, it is popularly known as the city of step-wells and Rani Ji Ki Baori is one of the noted step-wells here. Constructed under Queen Nathavati in 1699 AD, this multi-storeyed structure has places of worship on each floor and is 46 m deep with intricate structures, carved pillars and a high arched gate.

This magnificent structure is yet another famous stepwell in Gujarat, located approximately 18 kilometres north of Ahmedabad in the village of Adalaj. The construction of his five-storeyed baoli began in 1498 to curb water crisis in and around the village. Although, there is a tragic story associated with its creation. The ruler of this region, then known as Dandai Desh, started building the stepwell, but in 1499, a Muslim ruler attacked and ransacked the area, killing the king. But the invading Muslim ruler also fell in love with the dead king’s queen, who promised to marry him only if he finished the stepwell in honour of the dead king. The Muslim invader agreed to build a grand step, with a blend of Islamic architecture and Hindu carvings – hence the deities carved on the walls and pillars. But when the well was completed, the queen jumped in and gave up her life.

The Surya Kund (stepwell devoted to the Sun God) is located in the Sun Temple complex of Modhera in Gujarat. The temple was built in 1026 AD by King Bhimdev on the bank of the river Pushpavati and is also called as Ramakunda. The structure was not used just to store water but also for religious ablutions before praying to the Sun God- Surya. Today, this large rectangular stepped water tank falls under the supervision of the Archaeological Survey of India and is known as the finest example of geometry. While it isn’t too deep, the stepwell is quite wide, consisting of 108 miniature shrines carved on its steps.

So, visit these beautiful pieces of architecture that India is blessed with and let us know all about it in the comments below!