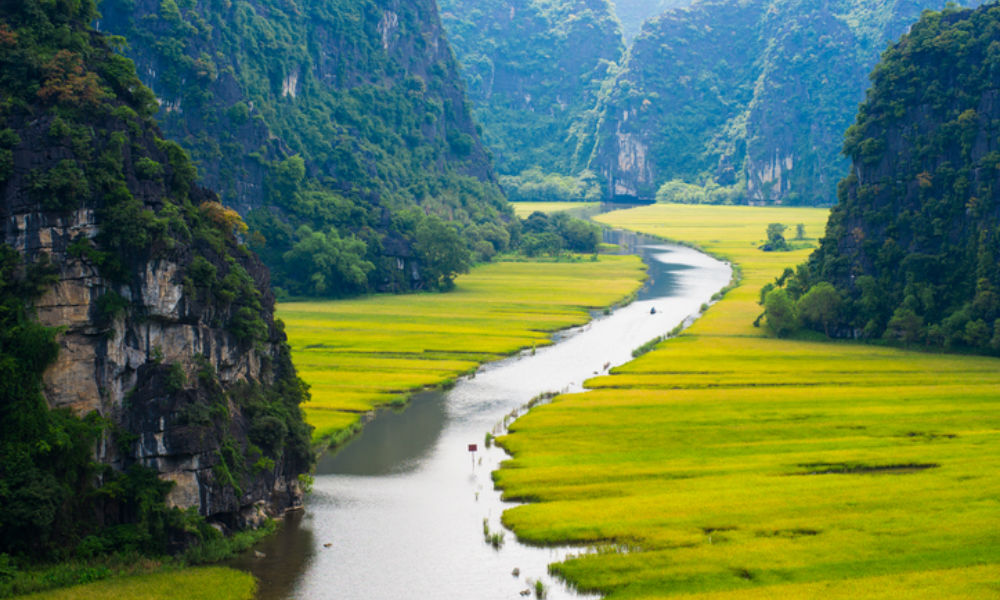 Located 100 kilometres South of Hanoi city, Vietnam’s Ninh Binh province is blessed with natural picturesque scenery, beautiful historical and cultural sites. Confusingly so, the province also has Ninh Binh town as its capital city but when people are referring to this part of Vietnam they are talking about the whole Ninh Binh district which comprises several towns, villages and key attractions.

Also Read: Here’s Why Vietnam Should be Part of Your Travel Food Trail

Set amidst limestone karsts, Ninh Binh province offers similar landscape views as like Halong Bay and is therefore known as Halong Bay on land. Being Vietnam’s lesser-known gem, Ninh Binh is less touristy and spoilt than its sister to the northeast. So pack your bags for the stunning landscapes of Ninh Binh that are surrounded by lush green paddy fields and striking limestone outcrops.

Also, if you’ve watched the 2017 movie Kong: Skull Island, you must have glimpsed some of the epic landscapes around this region. It is just as beautiful in real life minus any oversized angry creatures, obviously. Hehehe.

Here’s a list of must-see attractions in the province that should be in your North Vietnam itinerary:

7km northwest of Ninh Binh is the region of Trang An where you can rent rowboats to float along Sao Khe River through limestone caves. With a variety of mountains, caves and rocks, the region also has many beautiful religious structures, surrounded by canals, lakes. Take this 2 hours boat ride through the scenic waterways and you’ll be greeted with serene sights of the extraordinary natural landforms with temples. It’s simply mesmerizing.

Don’t forget to pack a hat and sunscreen as the boats lack shade.

Tam Coc or “Three caves” is framed by lush green rice fields and limestone karsts, making it stunning, yet peaceful.  Take another boat trip very similar to what is Trang An offers– mountains, rivers, caves, rice fields, and pagodas. Enjoy being peddled around and through its karst landscape dotted amongst emerald green rice paddies down the Ngo Dong river.

Take a break and hop on for this boat ride that’ll take you on a cruise along the river and you’ll be rewarded with the awe-inspiring natural landscape and a chance to see the rural religious sites hidden away from view.  Don’t forget to catch a glimpse of the women that row the wooden paddles. They use their feet to ride the boats which is a special technique that takes months to master.

Connect your visit to Trang An or Tam Coc with a trek to Mua cave for a great panorama of Ninh Binh’s scenic mountain-scapes. To reach the top of the cave, you have to cross a small bridge over the gently flowing stream, and then a paved way covered with green trees and last but not the least, about 500-steps. This stone staircase that takes you up to the cave’s entrance zigzags through the karst and it leads to a simple altar to Quan Am (the Goddess of Mercy).

The best time for the most magnificent scenery is between the late May & early June when the rice in Tam Coc turn its green colour to yellow! 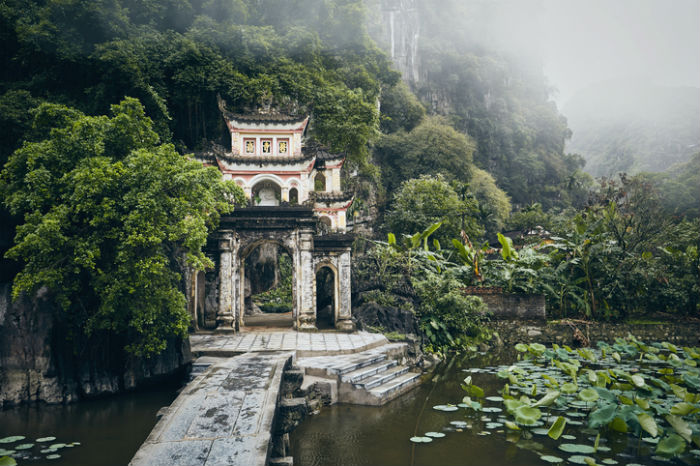 Bich Dong Pagoda is this charming cluster of cave temples that is located just a couple of kilometres north of Tam Coc. This 15th-century pagoda is consists of 3 separate layered pagodas which are Ha, Trung and Thuong Pagoda on different levels and you have to climb up the hillside to explore each of them. The path to the top of this ancient temple is steep but well, the lavish views of the valley and luscious greenery are worth it.

The ancient capital the Dinh and Le dynasties in the 10th-11th century, Hoa Lu is located 15 km from Ninh Binh and Tam Coc. Nestled between two towering limestone mountains, this royal city today acts as a national-level cultural centre filled with ancient pagodas and citadels.

This charming and tranquil landscape of Hua Lu is set in beautiful surroundings beside to Truong Yen village and can be easily visited on a day trip from Ninh Binh. While there aren’t many remains except some temples built on the old sites which are Hoa Lu’s two surviving temples. These are Dinh Tien Hoang and Le Dai Hanh. Although both spaces are dominated by dark-red lacquered pillars, Dinh Tien Hoang has restored in the 17th century and houses a statue of Emperor Dinh Tien Hoang with his three sons. The second temple, on the other hand, is dedicated to monarch Le Dai Hanh.

The ancient city is especially for anyone who wants to know and dig deeper into the culture, history of ancient Viet architecture.

With an area of over 30.000 hectares of wetland, Van Long nature reserve is the biggest wetland reserve in Northern Vietnam.  This unique complex features outstanding landscapes of majestic mountains & grottos giving a transition region between the plain and the mountainous region. Located in Gia Vien district, Ninh Binh province, Van Long nature reserve also acts as a Rehabilitation centre for the animals. They are released back into the wild after their treatment. The nature reserve is the perfect place to discover Vietnam wildlife as it is home a number of Vietnamese species like monkeys (including the endangered Delacour’s Langur), reptiles, and birds.

Located about 29km south-east of Ninh Binh in Kim Son district, Phat Diem Cathedral is a fine example of Sino-Vietnamese architecture. Sitting in the middle of scenic canals and rice paddies, the cathedral was built from stone and wood between 1875 and 1899.

The whole structure constitutes an original set which Western Gothic architecture that includes 2 gothic chapels and some massive ironwood columns blends perfectly with that of traditional Vietnamese pagodas; giving it a peaceful, solemn feel.

Consisting of more than 200 square kilometres, Cuc Phuong National Park is the largest nature reserve in Vietnam. Established in 1962, this is part of a huge swathe of protected land in Ninh Binh and was set up in order to take care of the wildlife in the region which has been in decline for many years as a result of poaching. The National Park is located 120 kilometres south of Hanoi and is home to over 300 species of rare birds and 2000 species of plants.

Biking and hiking are the best ways to explore this dense rainforest which also possesses historical significance, as prehistoric tools and ancient tombs have been discovered in some of the caves.

So take this road less travelled to Ninh Binh and do let us know about your experiences below!