Cinque Terre is a coastal region within Liguria, in the northwest of Italy. Lying west of La Spezia, it comprises five seaside villages along the picturesque Italian Riviera Coastline. These villages from north to south are Monterosso al Mare, Vernazza, Corniglia, Manarola, and Riomaggiore. These small villages are an incredible fusion of history and culture. While the territory was long isolated, the characteristic Ligurian culture has been conserved.

The five picturesque villages with their medieval origin and cultural heritage also feature paradisiacal bays, dreamy beaches, and crystal blue water. Ah! What more would I ask for? Once isolated, now these villages have been connected with the outside world when the railway line was built. The entire area is now a very popular tourist destination. The five villages, the coastline and the surrounding hillsides are now a part of the Cinque Terre National Park (a UNESCO World Heritage Site). In this strip of land on the Italian Riviera coastline also known in Italian as the “Riviera Ligure di Levante”.

Monterosso is the largest of the five coastal villages and is situated on the northwest coast of the region. It is divided into an ‘old and new’ section marked by the medieval tower of Aurora. While the new part is from San Cristoforo, the old part is protected by a rock spur and still presents the maritime village. A small tunnel of about 100 meters connects these two sections that cater to pedestrians and the very few cars in the town. Fegina (the new part) is full of life and is the reflection of an area that tourism has made rich, with a great quantity and excellent quality of hotels and restaurants. Meanwhile, the old part of the town is dominated by the ruins of the castle and characterized by typical narrow medieval streets (carruggi) with multi-coloured terraced houses.

The sandy beach in this town is the only extensive sand beach in the Cinque Terre and runs along most of the coastline. Visit the lemon trees of Monterosso and don’t forget to try the white wines, grapes, and olives that this town is famous for!

This little town is located the province of La Spezia, Liguria, north-western Italy and boasts the only natural port in the Cinque Terre. This tiny port is surrounded by subtle colourful pastels and the charming Piazza Marconi with its sea-facing amphitheatre.

Set during the Roman times, Vernazza had strategic importance during the age of the Maritime Republics in Genoa. This commune grew as a powerful fortified town with a strong military defence and is characterized by its trademark caruggi (narrow lines). They rise almost vertically with the pastel-coloured homes, a maze of stairs and tiny terraces, with big blue sea views popping at every turn. We’d suggest you to a walk to visit the Church of Santa Margherita d’Antiochia, that overlooks the seaside and the “Castello” remains.

Sitting atop a 100m-high rocky headland, Corniglia is the highest of the five Cinque Terre villages. Surrounded by vineyards, it is known to be a strong producer of wine and agricultural goods. This small village is also the only village that lacks direct access to the sea, but it can be reached from the railway through a long flight of stairs called “Lardarina”. Situated in the middle of the Cinque Terre, Corniglia has two exclusive small beaches at its sides, narrow alleys and colourfully painted four-storey houses.

While taking a walk in these tranquil and tangles streets you’ll reach an enchanting terrace on the seaside called Belvedere di Santa Maria. This is the only vantage point from where you can view (or click pictures of) all five villages at once. Also, do visit the Church of San Pietro (1334) for its gothic Ligurian style. 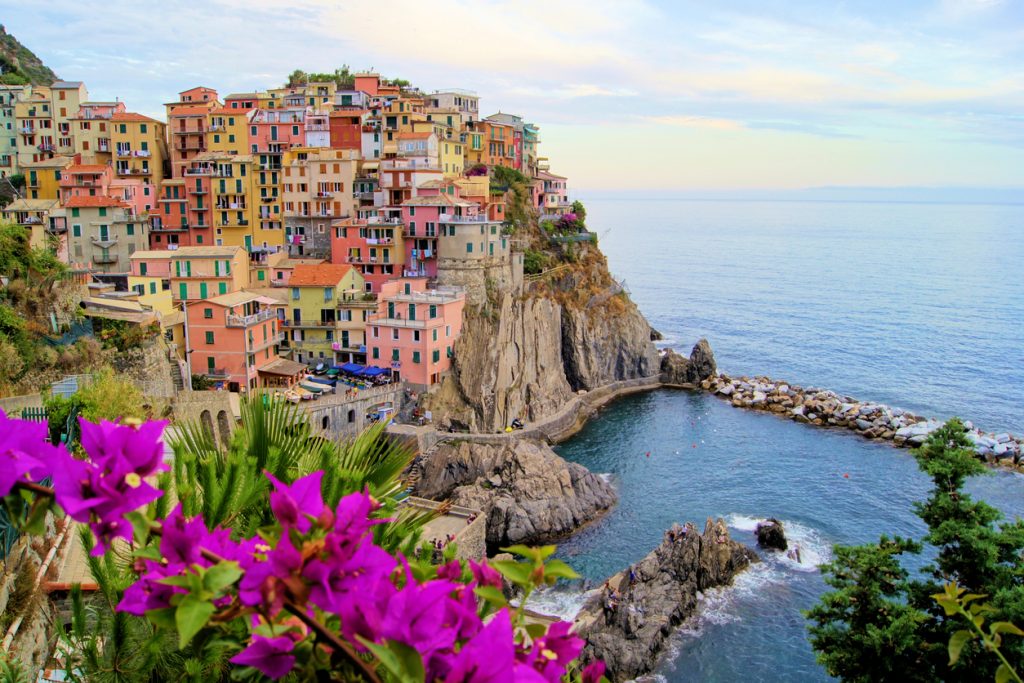 The village of Manarola is built on a high rock which is 70 metres above sea level. Situated along a stream and surrounded by grapevines, this little town produces the famous Cinque Terre wine: Sciacchetrà. Manarola is also known for the colourful buildings and houses that slide down its rocky and rugged coast. The village is all ups and downs, with steep narrow alleys (carrugi), leading to the sea.

While visiting this little town, we’d suggest you take a walk to the upper side of the village and check out The Church of San Lorenzo (1338). It is well-known for its beautiful rose window dating back to the 14th century. Just like the rest of the Cinque Terre towns, Manarola also has many picturesque trails. For example, Punta Bonfiglio, a short uphill hike leading to fabulous views or the famous “Via dell’ Amore” connecting Manarola to Riomaggiore. 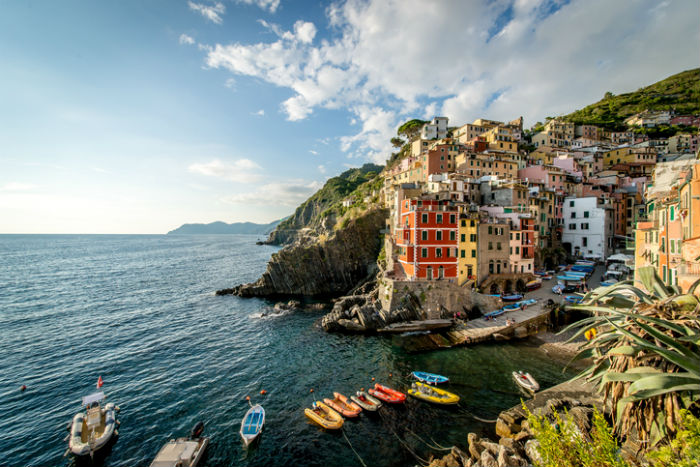 Riomaggiore is the southernmost village of the Cinque Terre region. This village was named from the position of the characteristic tower homes built along the river (Rio) and is also the nearest village to La Spezia. Because of its location, this town is often the first stop whenever one is travelling north from La Spezia. While Riomaggiore is believed to date back to the 8th Century, there was news about it only in the 1200s. The historic character of this town and its wine isn’t something that has gone unnoticed since the 13th century.

The town climbs up along the ridges overlooking the sea; and it is characterized from the typical stone houses with pastel-coloured façades and slate-roofs. They can be best appreciated from the sea, making it one of the most romantic sights of Cinque Terre. Do visit the Sanctuary of “Madonna di Montenero”, which is built on a rocky promontory just up the hill from its pebbly beach.

The Cinque Terre villages are all are linked by a network of footpaths that offer the best opportunity to truly enjoy the unique landscape along the coast Italy. There is also a train- and boat connection between these beautiful hillside towns. While planning your trip here, do pack comfortable walking shoes; as cars aren’t allowed in the older sections of these towns. Visiting the charming Cinque Terre villages will not just be an exercise for the body, but also for the soul. Don’t forget to let us know about your experiences here at these picturesque towns in the comment section below!