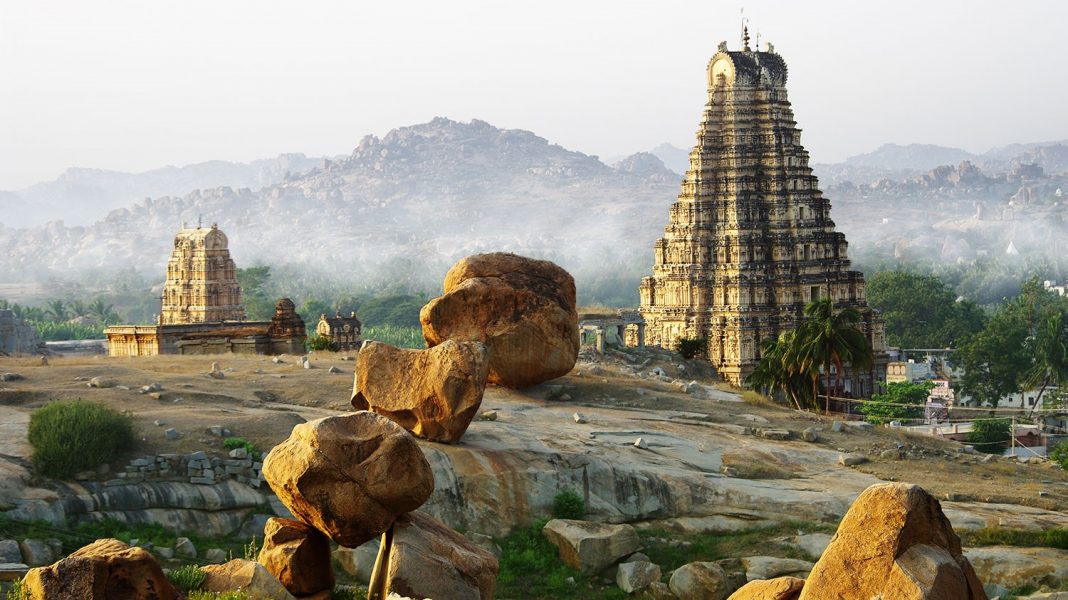 The ancient town of Hampi is located in the Indian state of Karnataka, on the banks of the Tungabhadra River near the modern town of Hospet. It was once the magnificent capital of the Vijayanagara Empire, but now much of it lies in ruins which can be seen when visiting Hampi. Today, they form a UNESCO World Heritage Site.

Though the settlement itself, as well as many of the temples, go back for many centuries, Hampi is most closely associated with the Vijayanagara Kings who ruled here for over 200 years from 1336 AD. In the 14th century, it was filled with traders, merchants, and bustling markets. According to historical records left by Portuguese and Persian traders, it was an extremely wealthy and prosperous metropolitan city

By 1500, it was said to be the world’s second largest medieval-ear city (after Beijing). Hampi’s wealth attracted traders from across the region. This led to it having an excellent system of roads and public infrastructure. However, numerous wars with the Muslim Sultanates came to a head at the Battle of Talikota in 1565. A coalition of the sultanates captured and beheaded the king, bringing an end to the Vijayanagara dynasty. They followed this by sacking and looting Hampi. The once-wealthy city reportedly burnt for six whole months and was ultimately abandoned as ruins.

Also Read: Iconic World Heritage Sites In India You Have To See

The Many Temples of Hampi

Hampi is most famous for its many temple complexes, each complete with its own marketplace. The oldest of these is the massive Virupaksha Temple. Still an active site of worship, it consists of various shrines dedicated to deities Shiva, Pampa Devi, and Durga. They sit in the shadow of a 160foot gopuram (gatehouse tower).

Another splendid temple to see while visiting Hampi is the Vitthala Temple, one of the most splendid and artistic in the area. It is dedicated to Vitthala (a form of the god Krishna). Some of the most famous features of this temple are the Garuda Shrine in the form of a stone chariot, and the musical pillars that resonate with musical notes when struck.

The Achyutaraya Temple, with its 100-column hall decorated with avatars of Vishnu, deities such as Shiva, Surya, Durga and scenes of daily life provides a unique insight into life in the Vijayanagara Empire. Located nearby, the Hazara Rama Temple (also known as the Ramachandra temple) was the ceremonial temple of the royal family.

Both the outside and the inside are richly decorated in carvings depicting the Hindu epic Ramayana and various festivals. You can also visit the Kodandarama temple, the Pattabhirama temple, the Lakshmi Narasimha temple, Hemakuta Hill temples, and the Balakrishna temple among various others.

Other Things to See when visiting Hampi

Apart from the many temples, there are also lots of other things to see at Hampi. Perhaps the most popular is the Hampi Bazaar. This kilometre long stretch of shops is located in front of the Virupaksha Temple. Bordered by ancient pavilions, it is now filled with small shops selling jewellery, clothes and antiques, and restaurants offering a wide range of cuisines.

Visitors can also see the many royal buildings that remain. Among these are the Mahanavami Platform, once used for festivals, and the grand Elephant Stables. In the royal centre of the ruined city, you can also see the numerous water tanks and water pavilions for public baths, as well as public bhojana shalas (community kitchens) and fountains. However, one of the most popular spots is the Zenana Enclosure. Located near the elephant stables this may have been the residence of the royal ladies (though this is disputed) and features the wondrous two-storey Lotus Mahal. This was supposedly the queen’s recreational pavilion.

There are many other things to do when visiting Hampi, including seeing the various Jain temples and Muslim monuments. If we’ve missed any, be sure to share them in the comments below.

How to Get to Hampi

Hampi is easily accessible from most places in India. The closest airport is 40 kilometres away, Jindal Vijaynagar Airport (VDY) near Bellary. However, flights can be infrequent here, making it simpler to go through larger hubs like Bangalore or even Hubli. From here, Hampi is the perfect distance for a weekend road trip or a quick getaway.

Visitors can also come in by train, as the nearest railway station, Hospet Junction, is just 13km away. Trains run regularly from Bangalore, Mysore, Goa, and Hyderabad and are quite comfortable. Hampi itself is best explored by foot or bicycle so that you can properly soak in its unique atmosphere. However, there are also rickshaws and car rentals available.