Home of nearly a hundred churches, Lucca is a charming little city located in Tuscany on the western coast of Italy. This historical town lies in close proximity to Pisa and is known for its imposing Renaissance walls; its cobbled streets; handsome piazzas and shady promenades.

Like much of Italy, Lucca also has a history of domination by a long list of invaders and rulers. But through it all, Lucca has managed to be a beautiful and city; one that you must visit on any trip to Tuscany.

For all history-buffs and old architecture-lovers, Lucca is a going be a true haven. Nicknamed as the “city of 100 churches”, Lucca has an incredible collection of houses of worship. So, treat yourself with stunning renaissance architecture and historic monuments.

Located in the Piazza San Martino, and also known as St Martin Cathedral or the Duomo of Lucca, you’ll find it’s Romanesque-Pisan façade is filled with mysterious and obscure symbols, resembling a beautiful labyrinth. The construction of this truly impressive structure began during the 11th century but was given its current form during the 14th century Renaissance.

Another stunning church in the centre of Lucca, the Basilica di San Michele in Foro marks the spot where the city’s Roman forum was. This impressive Romanesque structure features large Romanesque façade that was constructed over 300 years on the site of its 8th-century precursor, beginning of the 11th century. The façade is also topped with a statue of the archangel San Michele, or Saint Michael. 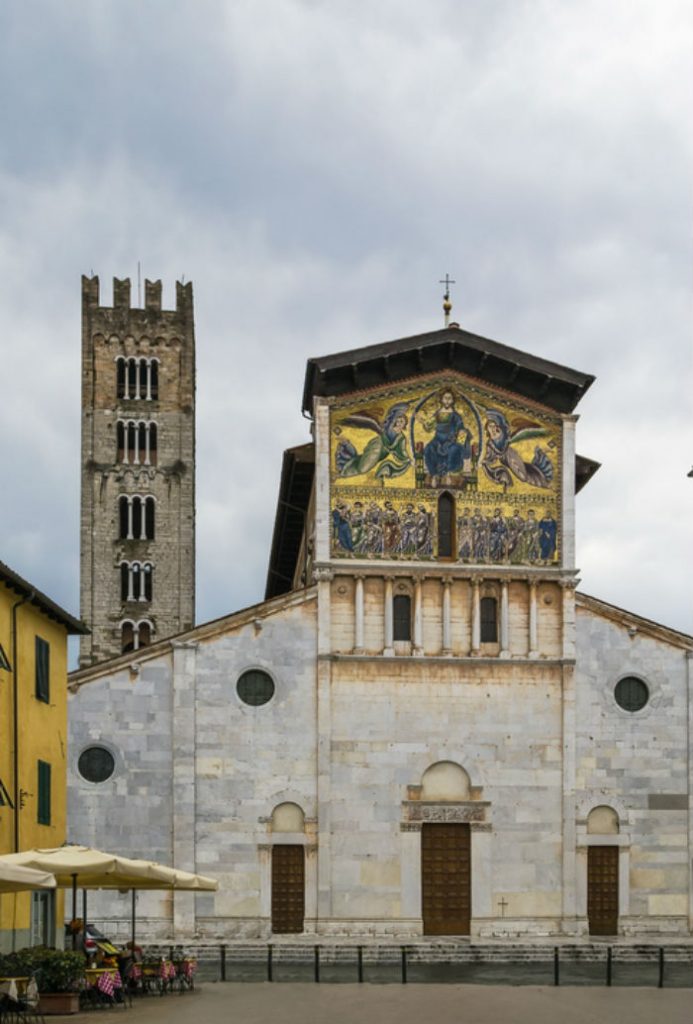 Built between 1112 -1147, The Church of San Frediano is dedicated to a sixth-century Bishop of Lucca and features a unique facade decorated with a stunning 13th-century Italo-Byzantine-style mosaic. Made mostly with gold leaf mosaic that glows beautifully in the sunlight, the lower part of the facade is plain, while above it is a huge mosaic of Christ flanked by two angels with the 12 Apostles below.

Don’t forget to visit the patron Saint of Lucca; The Incorruptible Santa Zita that lies in rest in the church of San Frediano; dressed and in full view, some 700-plus years after her death in 1272.

The Piazza dell’Anfiteatro in Lucca is an oval-shaped piazza that used to be a site of a Roman amphitheatre; where gladiators battled for supremacy in front of rapt audiences. Today a bustling marketplace situated on the northeastern side of the city, it is also surrounded by buildings constructed exactly on the lines of the old Roman amphitheatre; using parts of the original structure, giving it a distinctive elliptical form and its name. Enjoy different shops, cafes, and restaurants that are around the lively piazza.

The perfectly preserved mura (wall) that embrace the city centre was built around the old city in the 16th and 17th centuries and stands to this day. Take a walk around this old town and you’ll also get to see the most complete and well-preserved fortifications in Italy. Lucca is enclosed within a circuit of walls that are 4.195 kilometres long with eleven bastions and six gates. 12 meters high and 30 meters thick at the base; these magnificent encircling walls still make a great starting point for discovering the city even today.

The Torre delle Ore is a 125-foot high clock-tower, built with red brick and topped by several ancient Holm oaks; it is also one of the few remaining tower houses in Lucca. Constructed in or around the 14th century, this tower has served as both a defensive fortification and a clock tower during its 700-year history. Climb the 200 steps of Torre delle Ore for unrivalled views of the city of Lucca.

Tip: Save money by getting a combined ticket for this and the Guigini Tower. 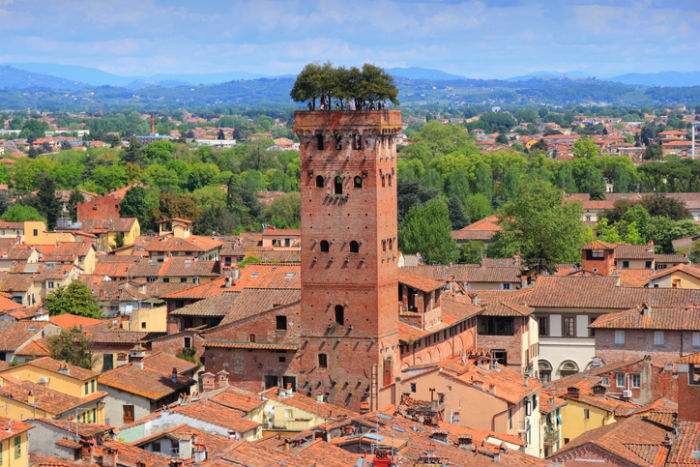 Another medieval tower, Guinigi Tower or Torre dei Guinigi was built by Lucca’s ruling Guinigi family; they brought Lucca a period of peace and prosperity at the beginning of the 15th century. Situated right at the centre of the walled old town, you can identify this 44.25 meters high tower from a distance by the large oak trees growing out of its top.

Lucca’s main square, Piazza Napoleone is one of the loveliest piazzas and the centre of political power. It is also known by locals as Piazza Grande and was dedicated to Napoleon by his sister Elisa Bonaparte Baciocchi. She led the Principality of Lucca between 1805 and 1815 and had the entire appearance of the square redone.

Today, the building occupies the entire west side of Piazza Napoleone and is also the headquarters of the provincial offices. In the last few years, the city has become an important summertime destination for music; due to the Lucca Summer Festival, which brings life to the large Piazza.

With its packed medieval centre that is still nearly all intact, this little town of Lucca in Tuscany has definitely become a beautiful setting for vacations. So, add this to your Tuscan itinerary and let us know about your experiences below!