More
Home Topics of Interest Adventure Travel Your Ultimate guide in the Seascapes of Palawan!

The province of Palawan in the Philippines is best defined with water all around it. This archipelagic province of Philippines boasts of rainforests, majestic mountains, karst cliffs, primitive caves and virgin beaches. This complex and diverse ecosystem serves as a refuge for many threatened creatures both on land and sea. And due to its high biodiversity and amazing landscapes, it is also known as “The Last Ecological Frontier of the Philippines”.

Also Read: Breathtaking Destinations in the Philippines Besides Boracay

The island of Palawan stretches between Mindoro in the northeast and Borneo in the southwest. It lies between the South China Sea and the Sulu Sea. Measuring 450 kilometres (280 mi) long, and 50 kilometres (31 mi) wide, Palawan Island is the largest island of the province. So if you are up for a heady mix of sublime seascapes, virgin rainforests and world-class resorts, Palawan is your paradise! It offers you boundless opportunities to escape reality for a few days – or even months.

We have a list of destinations you simply should not miss during your visit to this pristine paradise!

This island is only a 20-minute bangka (Motorized outrigger boats) ride from Coron and also offers some of the best island hopping tours.  While Palawan is known for some of the best scuba diving and snorkelling sites around, Coron takes it to a whole new level. This region was the stage for a major marine battle between the U.S and Japan during WW2. Thus, waters here are now filled with sunken vessels, making it one of the most interesting and unique diving spots in the world. In fact, Forbes magazine named Coron as one of the ten best dive sites in the world.  The wrecks and pleasant rock formations provide for excellent snorkelling and diving opportunities, with underwater visibility extending up to 20 meters. You can’t (and mustn’t) miss this in Coron! 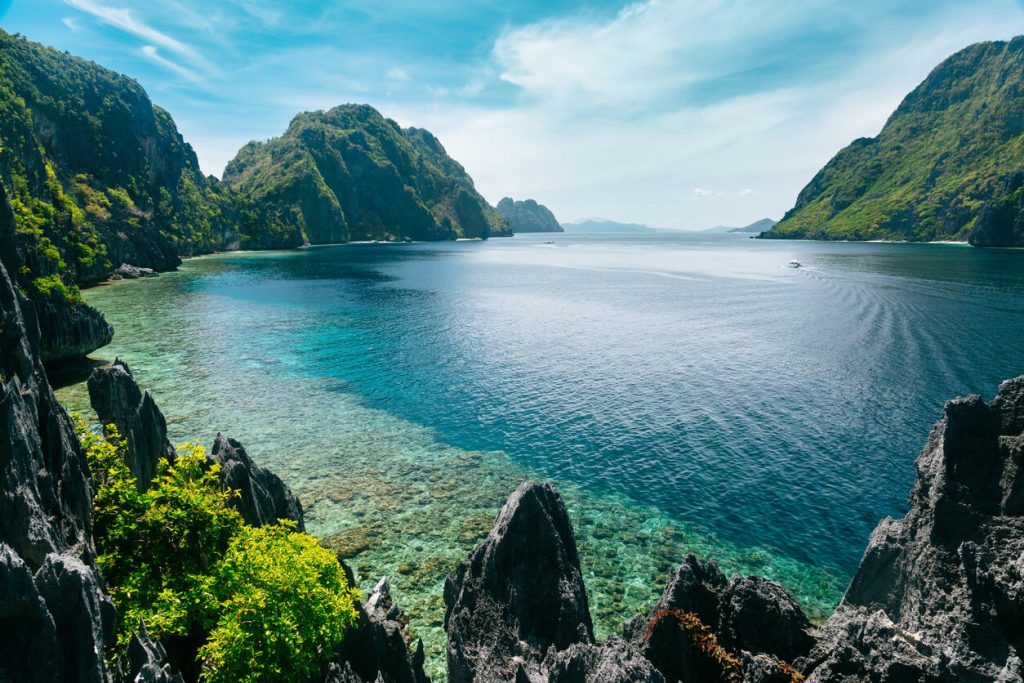 El Nido Island is situated north of Puerto Princesa, the capital city of the Palawan province is also the primary base for exploring Palawan’s star attraction, the stunning Bacuit Archipelago. You will never be bored with its beautiful beaches and lagoons. For the adrenaline junkies out there, this magical place boasts island hopping tours, cliff diving in Bacuit Bay, kitesurfing in Sibaltan Beach, rock climbing and scuba diving—all together in one island!

Take a dive underwater in Bacuit Bay and you’ll see how countless varieties of fish can be found here. The Bay itself is blessed with diverse ecosystems such as rainforest, mangroves, white sand beaches, coral reefs, and limestone cliffs. Therefore, it serves as a sanctuary of various forms of wildlife. Manta rays and fully-grown green sea turtles are a common sight here. All in all, El Nido’s rich in marine life and thrilling topography will just steal your heart!

The Puerto Princesa Subterranean River is a UNESCO world heritage site and also one of the new “7 wonders of nature”. At 8km in length, it is one of the longest navigable river-traversed caves in the world. The river features an unforgettable limestone karst landscape that can be explored via un-motorised paddle boats that proceed about 1.5km upstream into the cave. These boats take tourists for a one-hour exploration and now also include audio guide headsets. This tour is usually combined with lunch at the nearby village and the zip line in Sabang beach. You’ll get to see that millennium of water flow has created picturesque stalactites and stalagmites and these complex caves also have bats and swiftlets inside.

Located on the eastern shore of the island of Palawan, Honda Bay is just 45 minutes from the capital Puerto Princesa City.  With different islets and reefs a very beautiful yet massively overlooked wonder in Palawan. These islets and reefs have fishes and sea creatures of various colours (and shapes). Here the shallow turquoise waters cover an endless stretch of beautiful white sands of Pandan Island, Cowrie Island, Luli Island, Starfish Island, and Verde Island. These islets are perfect for swimming and snorkelling. The water at Honda Bay is so clear that visibility stretches far and wide into the ocean floor. So you can go snorkel, explore the inland of the islands, or just splash around in the water while you are island hopping in Honda Bay.

Home to some of the most beautiful coral reefs in the world, Tubbataha Reef National Park is located off the coast of Palawan in the middle of the Sulu Sea. It was the Philippines’ first National Park and also UNESCO World Heritage Site.

Rising from the volcanic depths of the Sea, this magnificent plethora of reef was only discovered by a group of divers in the 1970s. The park contains an astonishing diversity of marine life. You can see that it is an underwater sanctuary where nature thrives. Imagine entering clear waters of this national park, when in and around the reef, you see green sea turtles, manta rays, 11 species of shark (I KNOW!), tons of colourful fish and more…This is like a magnificent underwater garden!

Port Barton is a sleepy little beach town on the way between Puerto Princesa and El Nido. And this is the reason why this town offers simple pleasures and that too for half the prices that you pay in El Nido.

Enjoy the nature with full privacy at this chilled out town if you are done with crowds and need some time to relax. Just take a few strolls down the beach or go kayaking on the sea, explore rocky cliff sides, get a good tan while laying on a sandy beach—at this sleepy fishing town at your own pace.

Kayaking in Iwahig River among the fireflies

Mix things a bit for yourself and add a night adventure on the water. Kayak down the Iwahig River, under the starry night sky and you’ll get to experience another wonder. During this Kayak cruise, you’ll see glowing mangroves full of magical fireflies all around you that’ll totally make you feel like Tinkerbell as they light up the sky. Also, in the river, there are planktons which glow due to their phosphorescence. You just have to wait in pitch-black darkness for the firefly show to begin. Watch as the ethereal bluish swarms of fireflies flit from the mangroves along the Iwahig River-it is just MAGICAL!

I am sure these might seem a few, but let me tell you that each one of them has a plethora of activities that you won’t be able to finish in your vacay and would probably come back for! So what are you waiting for? Cmon! Pack your suitcases and goo!

Also, don’t forget to let us know about your experiences below!