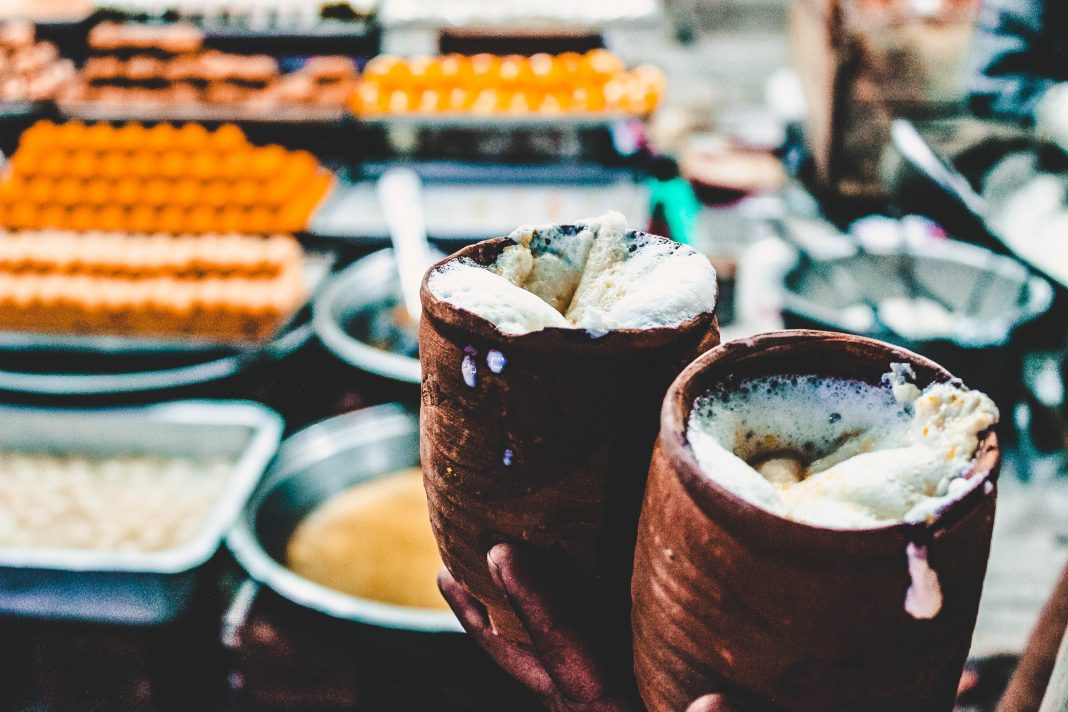 Food and travel go hand in hand. It’s one of life’s great intersections and it serves as a natural gateway to a more profound understanding of the cultural history and people of the places you visit. We all enjoy elaborate meals at fine dining restaurants, but if you wish to authentically connect with the flavors a place has to offer, we suggest you explore their street foods.  India as a country with its rich heritage has a variety of lip-smacking dishes to offer and when it comes to street food you are spoiled for choices. Here is a list of the most delicious street food in India that you have to try.

Also known as Gol Gappa and Pani Puri these are the most popular street food in India. This tangy, minty street food is made of round flatbreads called puri, stuffed with a mix of chickpeas, onions, potatoes, chutney, chaat masala, which is dipped in water flavored with tamarind and coriander. These are small bursts of flavor and are available all across the country.

A trip to Mumbai is incomplete without enjoying a Vada Pav. The dish is deep- fried potato fritter placed in a pan-fried bun called a pav or a pao. It has spicy chillies in the middle and is served with a side of coriander chutney. Sold across almost 50,000 stores in Mumbai, Vada Pav’s are eaten throughout the day.

Originally from Punjab this household breakfast favourite has taken the culinary world by storm. This dish is a chickpea curry made with a bundle of spice which is the Chole and it is eaten with fried flatbread which is the Bhauture. The flavour of the dish gets elevated when you eat it pickle. One bite of this and you will experience a burst of long-lasting flavours. This is street food in India you must on pass on.

When it comes to street food made of potatoes Aloo Tikki makes one delectable delight. Aloo Tikki is such a popular street food that in India its available in almost every nook and corner of the country. These are made with mashed potatoes mixed with spices and onions which are fried till they are crispy. They are served with either tamarind or mint chutney. Some vendors even go an extra step and top it off with some chole and yoghurt as well.

Bhaji is a tomato-based mixed vegetable curry, full of flavor which is served with buns coated in butter called Pav The combination of warm buttered bread and the spicy veggies makes a delicious Indian snack called Pav Bhaji. Initially originated in Maharashtra, this Indian street food in India is now popular all throughout the country.

A staple breakfast for the people in Karnataka, Akki Roti is made of rice flour and served with either coconut or tomato chutney. A dressing of onions, tomatoes, carrots and green chilies give it an extra punch. You will realize the reason of its popularity once you taste it.

Kebab’s are the most relished non-vegetarian street food in India and the Tunday Kabab is one of the delectable ones of the lot. Straight from the land of the Nawabs this mouthwatering kabab is not only delicious but also melt in your mouth soft. You would miss out on a delicious experience if you do not try these.

Originated from the Land of Kutch, Dabeli is a spicy snack prepared with a mixture of special spices and boiled potato which put into a burger bun called ‘ladi pav’. The stuffing also has garnishing of roasted peanuts and pomegranate. It is served ‘with Shev’, which are small crunchy pieces of noodles and a side of different kinds of chutney like garlic, tamarind, chilli etc.

Created in the streets of Kolkata, Kathi rolls are a popular snack all over India. A Kathi roll is essentially, vegetables, onions and spices, rolled into a flat bread. Street vendors offer multiple variations of these rolls but the chicken and egg are the most popular ones. A trip to Kolkata would be incomplete without you trying a Kathi roll.

Momo is a steamed dumpling with a delectable filling of either chicken or veggies. Though it originated in Tibet, it is quite popular all across India. Enjoyed with a spicy red chutney these are a delight, especially on a rainy day.  If you ever take a trip to Delhi, be sure to eat the momos at Dolma Aunty’s Momos, they are absolutely mouth-wateringly delicious.

Samosa is India’s most popular pastry, so much so that it is also a loved snack worldwide as well. It’s a pastry stuffed with potato, onions and peas which is deep-fried. This delicious triangle-shaped snack is the oldest in the country and tastes best served warm. This is one of the best street foods in India that you just can not miss.

Bhelpuri is a tasty street food made out of puffed rice, vegetables and tangy tamarind sauce. Eating this is close to having a flavour party in your mouth. Its also 100 % vegan and easy to make. So not only is it a popular street food it’s a popular household snack too.

Popular in the eastern and northeastern part of the country, Ghugni chat is comforting street food. This street food dish is made from dried white peas soaked in a delicious gravy that is topped with vegetables and local herbs. It is also one of the few healthiest options when it comes to Indian street food.

Even though served mostly during festivals, sabudana vada is a street food that deserves a special mention. These deep-fried bites are made from tapioca or sabudana, peanuts, chilies, potatoes, and coriander leaved formed into patties. It’s served with a side of either yogurt or coconut chutney. This is one of the most authentic street foods in India.

Lassi is a refreshing and creamy drink made by mixing yogurt and water with either spices or fruits. The drink can either be sweet or salty and now vendors have also come up with innovative flavours which are equally delicious as well. Lassi is also a great accompaniment to the various street foods of India as it helps subdue the spice.

These are just a few choices in comparison to the plethora of delicious street foods that India has to offer. I hope this read has successfully awakened a craving to try all of them. Because trust me words will not justice to any of them. And if you have already tried any of these, do you have a favorite? Let us know in the comments. I am off to get me a snack 😊