Melbourne is a well planned city set on the shores of the Port Phillip Bay and the northern shores of the Yarra river. The city has everything, from high-end fashion stores to humming bistros and chic bars, botanic gardens to sports stadiums, rich Victorian-time streetscapes to Manhattan-style high rises, food and film festivals to exhibitions and extravagant theaters, there are so many things to do in Melbourne that will entice you. This article gives you an insight into the colorful city and all details about the things to do in Melbourne.

Let’s Begin With A Little History About Melbourne

In 1835, John Batman and his partners paid the Wurundjeri clan 40 blankets, 30 axes, 100 knives, 50 scissors, 30 mirrors, 200 tissues, 100 pounds of flour, and 6 shirts to purchase 500,000 acres. However after the treaty was signed, John Batman left the place. After a few months another party led by John Fawkner, settled on the banks of the River Yarra. In three years the population of this place increased fourfold to 80,000. Later in 1851, it was renamed as “Melbourne” after the then reigning monarch Queen Victoria’s most dedicated prime minister, Lord Melbourne. Melbourne was a town until 1842 but became a city in 1847. There was always a debate on who should be regarded as the founder of Melbourne, Batman or Fawkner. However, the honor was given to John Fawkner.

Best Things To Do In Melbourne

Melbourne is a vibrant city and has a multitude of options for visitors. It is quite easy to get confused and leave out the important Melbourne attractions. So here we have compiled a list of places to visit in Melbourne. Don’t forget to get a Melbourne city map; it will be helpful if you get lost. If you are looking to enjoy the culture and beauty of this city then here are 20 ideas for things to do in Melbourne that are 100% guaranteed fun.

The Yarra Valley is one of the premier wine growing regions of the world. You can easily take a day’s trip to the Yarra Valley as it is less than an hour’s drive from Melbourne. The moving green slopes, vineyards, good food, breathtaking scenery and old farmhouses is sure to give you a feeling of a world away. The cellar doors of the district’s popular wineries are open at the end of the week. While you are there, glamping at the historic Balgownie Estate is one of the important things to do in Melbourne.

2. Drift Away In A Hot Air Balloon

3. Spend A Day And Night At The Melbourne Zoo

Yes, you heard it right; you can book for a zoo sleepover to experience the wildest night of your life by camping there. The dusk safari tour and zoo sleepovers will get you up close and personal with some of the world’s most majestic, mysterious and marvelous creatures. Dine with your hosts and sleep in a private tent, a night amongst the wildlife. Wake up to the chirping of the birds and animal sounds. After breakfast indulge in some close-up animal encounters and life behind the scenes. One of the top things to do in Melbourne, to have an experience like never before!

Melbourne Cricket Ground is one of the world’s greatest stadiums with a capacity of 100,000. It hosts cricket in the summer and AFL football in the winter. The MCG houses the state-of-the-art National Sports Museum. Melbourne is also acclaimed for many important sporting events like the Australian Open, Melbourne Cup, and Formula 1 Grand Prix. It additionally hosts the world’s most prominent art exhibitions and galleries (National Gallery of Victoria, Melbourne Museum). Melbourne attractions also include the universally acclaimed festivals (Melbourne International Film Festival, Melbourne International Comedy Festival, Melbourne Fringe Festival). The list is endless, but you can check out a few of these things to do in Melbourne to make your trip memorable.

5. Night Out At The Crown

The Crown is an entertainment complex beside the Yarra River in the core of the city. Set along the south bank of the waterway between Queens Bridge and Princes Bridge, the territory highlights shops, eateries, bistros, dance clubs, lodgings, shops and the Crown Casino. Guests can eat, unwind at a bistro sitting above the waterway, attempt their fortunes at the clubhouse, or just walk around the Southbank Promenade. This largest single building in Australia is always buzzing with something or the other. From riverside festivals to an array of gaming options, Crown Melbourne provides an experience that’s unparallel. This place is open 24/7 and is truly one of the greatest spots for entertainment.

6. Dive Into The Sea Life At The Melbourne Aquarium

Head to Sea Life Melbourne Aquarium for an instructive and engaging voyage through the submerged world. Located on the Yarra waterfront opposite the Crown Casino, the Melbourne Aquarium should be on the top of the list of things to do in Melbourne. This place is home to thousands of marine and freshwater animals, including sharks, turtles, stingrays, sawfish, tropical fish and much more. Meet some ocean urchins and starfish at the touch pool, watch several fish and sharks jump for food during their feeding time, and stroll through the Oceanarium to find numerous types of marine animals. Walk through the glass tunnels to experience marine life like never before. A wholesome entertainment for young and old alike! Your trip to Melbourne will be incomplete if you miss this place.

7. Abbotsford Convent, A Trip To The Past

The Abbotsford Convent is located in Abbotsford, a city in the suburb of Melbourne. It is just four km from Melbourne’s central business district. The Gothic towers of the Abbotsford Convent take you on a trip to the past when it was an orphanage and a laundromat. Today it’s a hot spot for artists, creators, and educators. The site, its buildings, gardens are occupied by a host of artisans —a place of art, culture and learning.

The City of Melbourne is one of the world’s most walk-friendly cities as this place is well supported for pedestrians. Whether you have only a few hours or a few days in Melbourne, this has to be on top of everyone’s things to do in Melbourne list. Get to know Melbourne more from the ground up by taking a self-guided walk using the maps and brochures. Go for the I’m free walking tours or just by searching for Walk Melbourne websites. Touring Melbourne by foot is the best way to explore and discover the secrets of south Melbourne. Take a Hidden Secrets tour or a Royal Botanic Gardens’ or Aboriginal Heritage Walk. Walks along Melbourne’s Yarra River or Fitzroy Gardens are breathtaking. Walk alongside the Merri Creek and don’t forget to stop by the Merri Creek Labyrinth on the way. 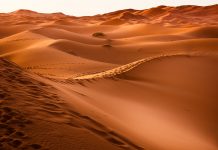 Explore The Untouched Land Of The Deserts And Outback In Australia