The end of August signals the beginning of one of the most exciting festivals in Spain. La Tomatina makes its grand arrival in the Valencian town of Buñol, bringing together thousands of people to celebrate. This messy, colourful festival involves people throwing thousands and thousands of over-ripe tomatoes at each other.

How did La Tomatina begin?

The festival first began in 1945 as a result of a street fight. The fight led to a person throwing vegetables from a nearby stall at people all around, one thing led to another and the rest is history! After the incident, the following year, the same young people picked a quarrel on purpose and brought their own tomatoes. This gave birth to the iconic La Tomatina. 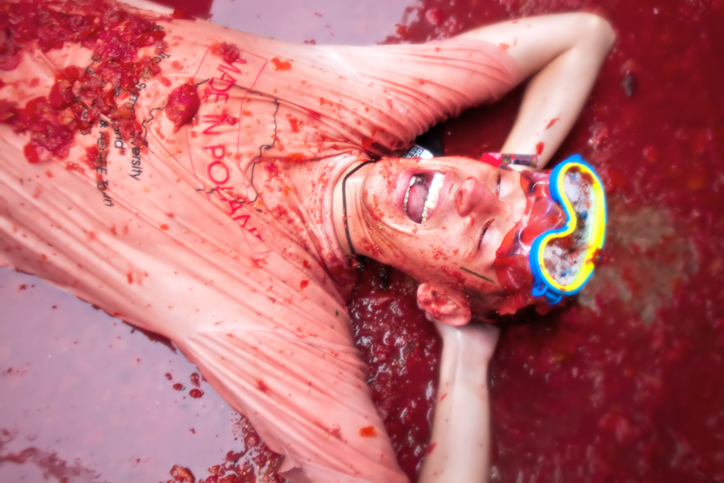 Though the festival has seen its fair share of challenges including being banned by the police, it has always made a triumphant return. The popular food fight has lived on for decades. Places like Nevada, Chicago, Costa Rica and Columbia have even recreated the festival. The festival usually lasts for an hour, after which fire trucks then hose down the streets. Participants often use hoses that locals provide to remove the tomatoes from their bodies.

Also Read: 18 Unique Places To Visit In Spain This Year

La Tomatina isn’t the only eccentric festival you’ll come across. Here’s a list of some other such wacky festivals from around the world!

1The Battle of the Oranges—Ivrea, Italy

In the small town of Ivrea, Italy, over a million pounds of oranges are collected every year for Battaglia delle Arance (Battle of the Oranges). This festival is celebrated like a highly structured war. If you want to participate, you have to be a part of any of the 9 teams that have nearly 4,000 competitors. There’s even a set of judges that pick out a winning team! The event usually takes place once every year on the Sunday and Monday up until and including Mardi Gras Tuesday.

Songkran festival in Thailand is a joy ride including water balloons, Super Soakers, and hoses. Every year in April, people come together for the main festivities in areas like Chiang Mai, Bangkok, and Phuket to drench each other. The festival has its roots in a Buddhist purification ritual that is done to wash away evil spirits before the Thai New Year by throwing water.

Locals in La Pobla del Duc celebrate the end of the grape harvest season in the most fun way imaginable. They throw grapes at each other! The town square is filled with nearly 90 tons of grapes sourced from local vineyards. Hundreds of people use them as ammunition for the grape war. The festival usually takes place any time between mid-to-late August.

Once a year on Ash Monday, the seaside town of Galaxidi in Greece explodes with colour. The Greeks celebrate the first day of Lent by throwing bags of coloured flour at friends, family, strangers, and visitors. The event is fondly called the Flour Wars.

This ancient Hindu festival is aptly called the Festival of Colours. Celebrating the victory of good over evil, Holi sees Indians take to the streets covered in different kinds of brightly dyed colour. They throw coloured powder at each other as a way of celebrating the festival. Water balloons and hoses are also used to ‘play’ Holi. The festival has gained a fair amount of recognition around the world.

Also Read: Holi In Mathura And Vrindavan 2019: A Majestic Festivity

Celebrated across Japan on February 3, the Bean-Throwing festival called Setsubun marks the beginning of spring. Roasted soybeans are either thrown out the front door or at members of the family. The ritual is believed to get rid of any evil from the previous year.