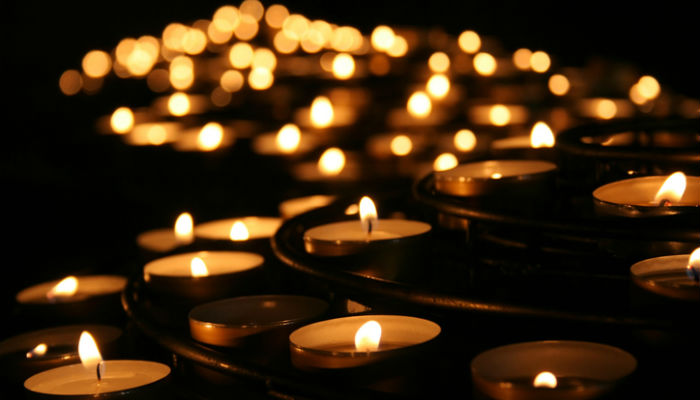 As humans, it’s lovely to see how we have come a long way. From War to Peace. From Hate to Love. From Barbarity to Humanity. And all of this, at a cost that we can never forget. The remembrances have been through texts, art, and architecture dedicated to the ones we’ve lost along the way. But as we give you a list of the memorials (in no particular order), we want you to look beyond the structures, the inscriptions, and the engravings—and we want you to remember their stories.

Here is a list of memorials from all around the world that will leave you speechless: 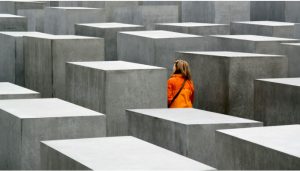 Memorial to the Murdered Jews of Europe which is also known as The Holocaust Memorial is devoted to preserving the memory of the death of 6 million people between 1914-1945 during the Second World War. Residing at the heart of Berlin, this memorial can be experienced by walking through the entire site which covers 19,000 square meters. A total number of 2711 slabs of concrete are placed on this site which differs in shape and sizes (yes, no two slabs are of the same size). The memorial’s openness and its abstract structure allows one to experience the memorial in his/her own way.

There is an Underground Information Centre which is a small museum in this memorial. Here, one gets to learn about other Holocaust memorials, biographies of Jewish families all over Europe, sites of persecution and extermination, photographs, diaries, and farewell letters. With this, the Museum makes the stories more real, informative and haunting. 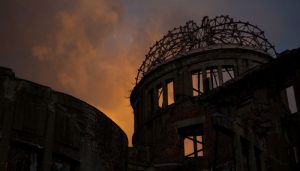 On 6 August 1945, the United States of America dropped the world’s first Atomic Bomb in Hiroshima. Today after 74 years, the Genbaku Dome is the only structure that still remains standing near the hypocentre of the first explosion that shook the entire world during the Second World War. With the efforts by the people of Hiroshima, the ruins of the dome are preserved in the same state as it was immediately after the bombing. The dome remains to be one unique symbol of not only destruction but also hope and peace. 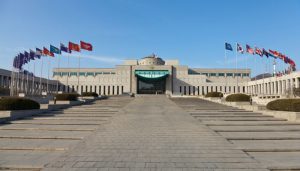 The war memorial of Korea was constructed to pay homage to the soldiers and victims of the Korean War and Vietnam War, clashes with North Korea since the Korean War and of policemen who died on duty. The memorial commemorates the noble sacrifice of the patriotic martyrs and leaves us spellbound with its 33,000 artefacts which include weapons and types of equipment from these wars.

The memorial which was established in 1994 has the Statue of Brothers which symbolizes the Korean War and the hope for reunification. The statue depicts a scene where a family’s oldest son, a South Korean soldier and his younger brother, a North Korean soldier meet on a battlefield. Their embrace represents peace, love, and forgiveness.

The exhibition in the memorial now serves as an educational purpose as well for the future generations as it makes them learn, preserve and collect various historical relics and records related to the Korean War history. 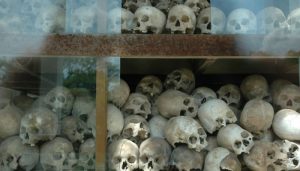 This memorial commemorates the victims of the mass genocide that occurred under the regime of Khmer Rouge during 1975 -1978. During this period, about 17,000 men, women, children and infants who had been detained and tortured at S-21 were transported to the extermination camp of Choeung Ek.

One gets to see how primitively brutal was the killings in this regime when Cambodia was isolated for four years. The Killing Fields of Choeung Ek as it is so rightfully named now contains the remains of 8985 people. The Memorial Stupa also has clear glass panels through which we can see the skulls of more than 8000 people, arranged by sex and age. The audio tour provided by the Memorial takes you through the chilling accounts of the atrocities.

Related reading: The Museum of Mines in Cambodia 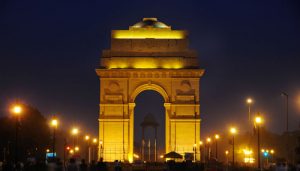 “Delhi Memorial” (official name) or India Gate stands 42 meters high at the centre of New Delhi. It is dedicated to the 70,000 Indian soldiers who lost their lives fighting for the British Army during World War I (1914-1919). The archway is located at the eastern end of the Rajpath. It also bears the name of more than 13,516 British and Indian soldiers killed in the Northwestern Frontier in the Afghan War of 1919.

While the foundation stone of the memorial was laid by his Royal Highness, the Duke of Connaught in 1921, the monument was dedicated to India 10 years later by the then Viceroy, Lord Irwin.

Situated under India Gate’s arch is an installation of a reversed L1A1 Self-loading rifle, capped by a war helmet on a plinth made in black marble. Four urns also surround the structure with permanently burning flames, that was named Amar Jawan Jyoti or Flame of the Immortal Soldier. Amar Jawan Jyoti was added to the memorial in 1972. This was established in the wake of Liberation of Bangladesh to pay homage to Indian soldiers killed in action. 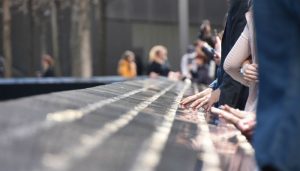 The National September 11 Memorial was established on September 11, 2011. It commemorates the 2,977 victims who lost their lives in the terror attacks of September 11, 2001, as well as the six people killed in the World Trade Center bombing in February 1993. The memorial is located at 180 Greenwich Street, New York, NY 10007, in the United States. This was the former location of the World Trade Center Twin Towers which were destroyed in the attacks.

The memorial has twin reflecting pools which are nearly an acre in size and sit where the towers once were. The pools are also surrounded by panels that bear the names of every person who died in the terror attacks of 1993 and 2001. The on-site Museum includes an exhibition of photographs and artefacts from the site; as well as a film with firsthand accounts from individuals who directly experienced the attacks. It takes you back to the turmoil, anguish and helplessness felt by the people during those terror attacks.

There are hundreds of other powerful and soul-stirring memorials around the world. Do share those that have touched you the most in the comments below