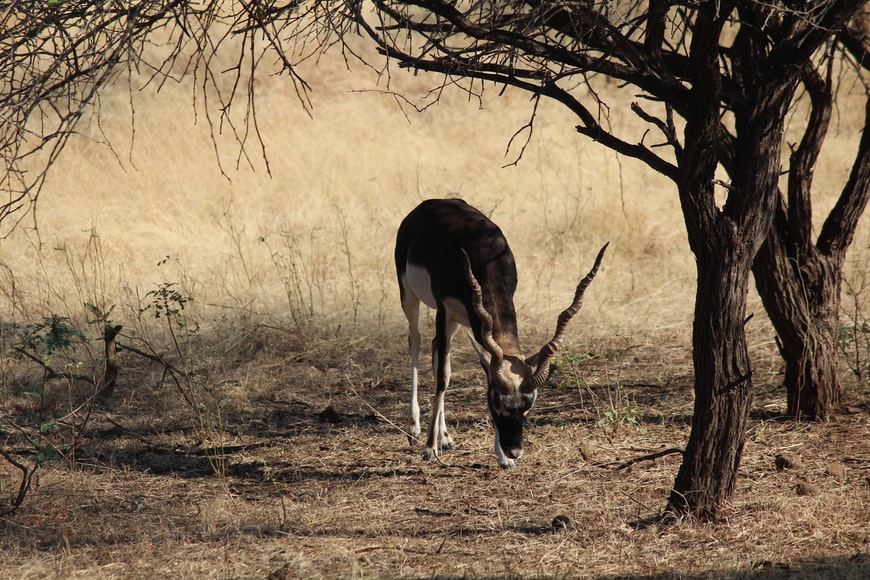 The only remaining abode of the Asiatic lions Gir National Park & Wildlife Sanctuary is one of the oldest and most visited wildlife sanctuaries. Located in the state of Gujarat in west-central India the park is 1,412 square kilometres of hilly, dry scrubland the park is responsible for the recovery of the critically endangered lions due to their conservation efforts that date back to 1965.  The total population of lions residing in Gir National Park numbers 674 as of date. Gir National Park’s ecosystem is also an ideal habitat for other animals like jackals, leopards, antelope, and deer. The four man-made reservoirs here and the seasonal rivers here make a home to the crocodiles. The watering holes also attract 300 species of resident birds, making the park a haven for avian enthusiasts as well.

How To Get There?

Girnar mountain range is one of the oldest mountain ranges in the world,  originally a part of the Gondwana landmass and within this region in The Gir National Park. Here are a few ways you can travel to the park.

By Air – There is no direct flight to Gir and the nearest airport is located at Diu which is 92 km away from the reserve. The next closest airport is around 160kms (3.5 hours’ drive) from Gir. There are direct flights available from Delhi and Mumbai to Rajkot, the Diu region is not well connected via air.

By Rail – There are regular trains from Ahmedabad and Rajkot to Junagadh which is 65 km from Gir and Veraval which is 45kms from Gir. You have to take a taxi or bus to Sasan Gir after reaching Junagadh /Veraval. Trains are running daily from Junagadh and Veraval to Sasan Gir station, but the timings may clash with your jungle safari schedule.

By Road – Gir National park is 60kms from Junagadh and 360kms from Ahmedabad and buses and taxis are running to the Sasan Gir area from most parts of Gujarat. Several private and government-owned vehicles can drop you at the nearest access to the sanctuary.

Though the weather may not be ideal, April to May is the best time for sighting the Asiatic lions. There are artificial water bodies created in the reserve for animals to have easy access to water and this is where most of the sightings happen. But the heat can touch up to 45°C making it unbearable and it would be prudent to visit Gir National park from November to March when the weather is cool and pleasant. It gets very cold at night During the end of December and the beginning of January and every year due to the monsoon season the park remains closed from mid-June to mid-October.

Things To Do At Gir National Park

People who visit the Gir National Park, come to have a chance to see its predators, Lions, and Leopards.  The park offers, jeep safari tours, complete with guides, that take you on one of the pre-determined safari routes in the park. There is also a three-day safari that includes lodging,  delivers maximum opportunities for wildlife viewing, as this multi-day experience is timed perfectly. Visitors can also access the park using a private vehicle, but there is a fee applicable but you will need to hire a guide. There is also a shorter, guided minibus tour that takes you through the park’s Interpretation Zone which is a fenced-off compound located off-site and this allows you to view a cross-section of the park’s wildlife.

Gir National Park is also home to 300 species of birds, including the critically endangered white-backed and long-billed vultures, and attracts avid avian enthusiasts. The park offers a two-day birdwatching tour, guided by experts, and will accommodate as few as two people and larger groups as well.

Tips To Make Your Trip Better

There are three luxury accommodations available at the Gir National Park, Woods at Sasan, The Gateway Hotel Gir Forest by Taj, and The Fern Gir Forest Resort. Laid within an 8-acre mango orchard built with indigenous materials and skills of local craftsmen is the Woods at Sasan a luxury eco-resort. The Taj I is located at the edge of the Gir forest and of course comes with great hospitality. Low-budget accommodations are available at Asiatic Lion Lodge, Gir Pride Resort, Hiran Holidays, and Carina Retreat.

A Haven For Wildlife Lovers

Home to many exotic animals, Gir National Park attracts tons of visitors. The overwhelming presence of the omnipotent big cat is the main reason to visit the National park. So if you wish to experience the habitat of big cats in its purest form book a safari today.