Best Dishes And Places To Eat In Lucknow

Get a taste of an authentic Nawabi food experience by visiting the best places to eat in Lucknow.

The city of Nawabs is famous for its exquisite architecture. This city is also a haven for food connoisseurs. The Nawabs were great gourmands and left a delicious legacy of food in Lucknow. From spice-filled biryani to flavoursome street food, the city offers a variety of options. Tunday Kebabs and galouti kebabs are famous dishes that you will hear about whenever Lucknow is mentioned. But if you think that’s all there is to it, then you will miss out on this food paradise. Make sure you tuck into some of the most well known dishes at the best places to eat in Lucknow.

Also read: Of mughals, monuments and more: best places to visit in Lucknow

Famous Food And Best Places To Eat In Lucknow

1. Lucknowi Biryani: The Best Or Not?

The constant battle between Lucknowi biryani and Hyderabadi biryani is a well known fact. The jury is still out on that. But one thing we know for sure is that Lucknow is famous for its dum biryani, and you have to try it. The dum biryani has its origins in Mughal cuisine. The Lucknowi biryani was born in kitchens of the kingdoms of Awadh. This kind of Awadhi cuisine defines dum as a type of cooking where the biryani with the rice and meat are cooked in a slow process to ensure that the taste of the masala is evident in the entire dish. Idrish Hotel in Lucknow is very famous for its dum biryani which is also cooked very slowly with ingredients like milk, saffron, and cream.

Awadhi Biryani is another special Lucknow dish. Unlike the dum biryani, there is a concoction that is made before the rice and meat is mixed to cook. The concoction is called yakhni and is made by boiling the meat stock for two hours. The stock is combined with different spices and cooked slowly to make sure the flavours are enhanced. This is added to the biryani to make the meat more succulent and delicious. There are many places to eat in Lucknow, and one of them that supposedly serves the best Awadhi biryani is Wahid Biryani in Aminabad.

Also read: 15 types of biryani to try in India

A dessert that stands out among the others is Nimish, a light cream with the taste of saffron and rose. Also called Daulat Ki Chaat, it’s made from a recipe that has Middle Eastern influences, since the ruling Nawabs used to welcome chefs from Persia. The best time to eat this dish is in winter. The dessert is very frothy, so it feels like you might be eating clouds. Initially, the dessert was only made on winter mornings and the milk was boiled and whisked manually overnight. Today, machines have taken over this work. The streets of the Chowk are the best places to eat this dessert in Lucknow. It is also adorned with a silver leaf and some vendors garnish it with nuts and seasonal fruits.

3. All The Kebab-enthusiasts, Lucknow Loves You

If you haven’t had kebabs in Lucknow, then you cannot call yourself a gourmand. Tundey Kebabs is the most famous restaurant in Lucknow. The tunday, galawati, or galoti and kakori kebabs are crowd favourites. Eating shammi kebabs at Shakhawat should also be on your ‘things to do in Lucknow’ list. Melt-in-your-mouth was a phrase coined for these delicious kebabs. Vegetarians visiting Lucknow don’t have to worry, as even the vegetarian fare will blow your mind. Dastarkhwan also offers vegetarian biryani, paneer kebabs, and Mughlai paratha.

Also read: Where to get best Ramadan food in India

When someone encourages you to  have a heavy breakfast, the people of Lucknow take it very seriously and eat nihari kulcha. This dish is very rich in flavour with a gravy that is infused with Indian spices and tender pieces of meat that will melt in your mouth. It’s meant to be  eaten with freshly baked kulcha (flatbread). Raheem’s hotel at the Chowk is crowded at breakfast time as their most loved dish is the nihari kulcha. Even though the dish is supposed to be consumed in the morning, it is served through the day because of its popularity and demand. The places to eat in Lucknow are endless but this hotel started in 1920 and 100 years later, it is still going strong. This meat gravy is cooked slowly along with spices to make the flavours strong, and the kulcha complements the gravy as it brings out the taste.

Lucknow is famous for the variety of food it offers. Street food in Lucknow is very appetising and sought-after. Hazratganj has a wide variety waiting to be devoured. The basket chaat or the katori chaat is a very popular dish. This special chaat has a base made of deep-fried potatoes that’s shaped into a basket. On this edible katori (basket), is piled different vegetables and spices. It is topped with yogurt and other chutneys. Royal Café is where you must head to grab a bite of this. There are other places to eat in Lucknow that are famous for this chaat but this place specialises in it.

Matar ki chaat is another favourite made of chickpeas. This mouth-watering chaat is made by boiling chickpeas and infusing them with spices. They are ground and made into tikkis (patties) and pan-fried. The crispy patty is then garnished with freshly chopped onions, chaat masala, lime juice, and small pieces of ginger and served with a fresh coriander chutney. The best place to eat this dish in Lucknow is Chhappanbhog at Sadar Bazaar. It is famous for this dish and serves other chaat options like aloo tikkis and desserts like jalebi and rasmalai.

This is a chicken curry bursting with flavour, all the more so, because it’s cooked in an earthen pot. To get its characteristic spicy and thick gravy, it’s cooked in a charcoal pit. It’s accompanied by a sweetbread called sheermal. It’s baked in a tandoor (clay oven) and saffron is added for a sweet aftertaste. This sweetbread complements the spicy dish perfectly. Kalika Hut is one of the recommended places to eat this dish in Lucknow. Sheermal can also be eaten with vegetarian gravy as well.

7. Of Desserts, Chais, And Paans

Moti Mahal, located in Hazratganj, is one of the most famous restaurants in Lucknow. The place serves delicious desserts like laddus and jalebis.

Chai after a biryani might sound like a peculiar concept, but it’s a ritual in Lucknow. Sharma Ji Ki Chai in Hazratganj is always crowded with customers looking for five minutes of peace in their chais. The place is always full, both during the morning and evening hours. It was built about 50 years ago, and has only six items on their menu, including the unique kulhad chai and bun.

As every good meal must end with a delicious paan, in our last segment we give you the Bilai ki Gilori at Ram Asrey. This soft malai paan is very smooth and quite unusual. It’s made with milk and malai (cream), and is believed to have originated when the Mughals banned paan. Ram Asrey, established in 1805, claims to have invented this recipe of the malai paan and is one of the best places to eat in Lucknow.

Whether you decide to hit the streets or visit restaurants, Lucknow will not fail you. With an almost endless list of places to eat in Lucknow, the city stands as one of the best food destinations in India. Food in Lucknow is as integral as its monuments as it is a part of the Nawabi cultural influence on the city. The foods that the Nawabs brought in when they ruled have now become daily dishes in Lucknow. 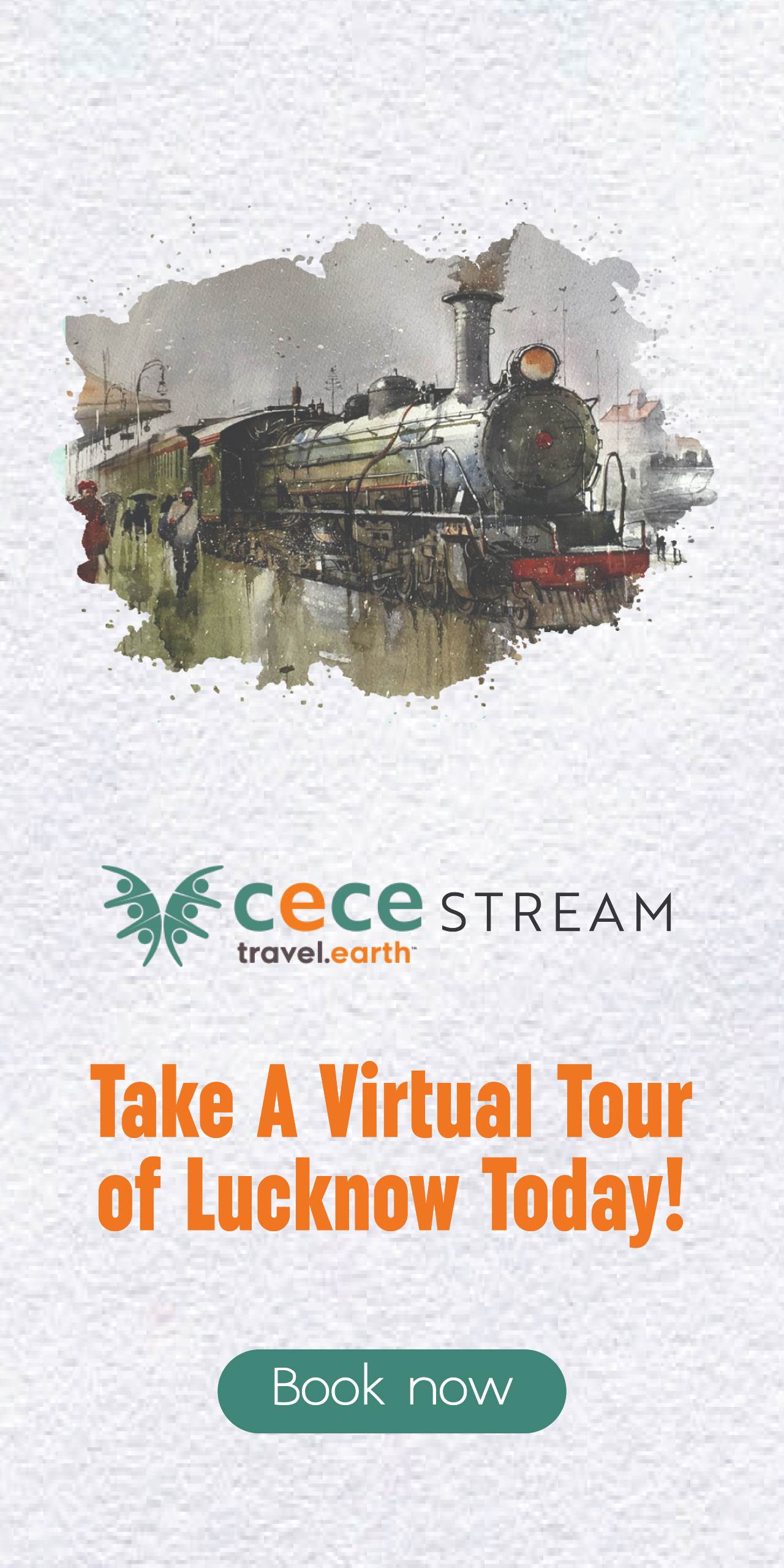