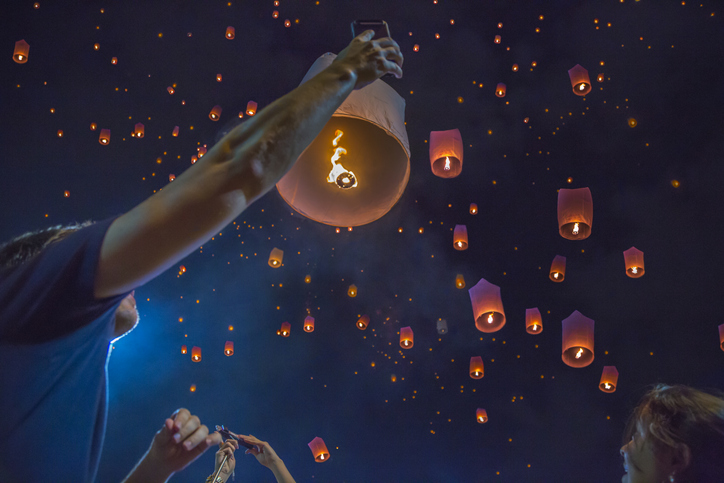 Celebrated across the world by illuminating various things, from rice paper floaters to candles on the ground, lantern festivals are a sight to behold. Each festival is observed for a deeper meaning, whether religious or cultural, united by the lighting of traditional lanterns to seek brightness, peace and hope. The sky lights up as each of the different lantern festivals ushers in prosperity. Sometimes, they’re also held as a token of paying tribute to departed souls. With their unique ambience and life, these festivals are an experience of a lifetime. Are you up for it?

Light Up Your World With These Lantern Festivals

Also known as ‘the festival of lights’, Diwali, or Deepavali, is celebrated by Indians around the world. The five-day festival usually takes place on the 15th day of Kartik, considered the holiest month in the Hindu lunar calendar (this usually occurs late October to early November; the exact dates change every year). This autumn festival is celebrated to symbolise the spiritual victory of light over darkness, or good over evil. It marks the return of the god Rama and his wife Sita to their capital Ayodhya, after defeating the demon Ravana, and their exile. The festival is also celebrated in honour of the goddess Lakshmi, the goddess of wealth and prosperity, inviting her blessings. Homes, shops, offices and temples are all brightly lit up during the festival, while people also burst fire crackers and exchange sweetmeats with each other.

Also Read: Here Are 6 Of The Best Places To Celebrate Diwali In India

Also Known as the Kupala Night aka Noc Kupaly, St. John’s Night is a festival that heralds the start of the summer solstice. Celebrated in Poland, and Polish communities abroad, the festival has its roots in pagan rituals that honoured the elements of fire and water. It’s usually observed on the shortest night of the year, on 21-22 or 23-24 of June. The feast focuses on fertility and well wishes, while the rituals include releasing lanterns into the sky, bathing in the open and sending floating wreaths with candles on the rivers. These glowing lanterns differ in size, colour and contain personal messages written on them.

Marine Day or Umi no hi, translates to ‘day of the sea’, and the festival is held on the third Monday of July. It’s a Japanese national holiday that pays tribute to the oceans. Over 50,000 paper lanterns are lit and artistically placed along the beach of Odaiba Beach Front Park, where visitors can walk among them and admire the view of Rainbow Bridge and Tokyo. These lanterns are shaped into flowers and other designs, and can be seen from far away. Local musicians and singers perform by the beachside café, where you can sit and relish the scenery and have delicious seafood.

This traditional Siamese festival is celebrated throughout Thailand on the night of the 12th lunar month (usually in November). As the main rice harvest season ends, this picturesque festival meant to thank the water goddess for a year’s worth of her abundant supply and ask for forgiveness. Therefore, locals send off their krathong (a basket traditionally made out of a banana stalk and stocked with candles and incense) into rivers and small canals called klongs as opposed to sending lanterns floating into the sky. Today, they are also released in a pond or lake, while many places also host a string of cultural activities, such as Ram Wong dance performances, Krathong-making competitions and a beauty contest along with the release of the lights.

Coinciding with Loy Krathong, Yi Peng (Yee Peng) is celebrated on the full moon of the 12th  lunar month every year in the north of Thailand. During this festival, thousands of rice paper lanterns called khom loi are released into the sky. This traditional festival stems from the belief that by sending an offering into the sky a person’s spirit can be cleansed and their misfortune can be reversed. The biggest ceremony takes place in Chiang Mai each year where you will see thousands of stunningly illuminated lanterns float up into the sky, candles lining the little sois (lanes), special parades, and floating flower offerings floating on the Ping River.

The Rise Lantern Festival is a lantern festival which is held annually, on November 8, in the Mojave desert in Nevada, about 25 miles south of Las Vegas. Each participant receives two lanterns, a marker, and a mat. People are then encouraged to write ‘a prayer, a dream or a resolution’ on their lantern, before setting them aloft at dusk into the Nevada sky. The event organisers of the Rise Lantern Festival have adopted a ‘Leave It Better Than We Found It’ policy, as part of their green environment sustainability program. Therefore, even though the lanterns are completely biodegradable, the crew collects the floating lights after the festivities.

Vietnam’s Hoi An Lantern Festival is celebrated on the 14th day of every lunar month, according to the lunar calendar. The coastal city of Hoi An, observes the festival where all the electric lights in the old town are turned off, and the streets are lined with colourful lanterns and candles. According to Buddhist tradition, the full moon is considered an ideal time to meditate, reflect, observe rituals, and honour deceased ancestors. Therefore, locals pay tribute to their ancestors during this festival. The city is transformed by the ambient flickering candlelight and multi-coloured lanterns released into the sky or made to float on the river nearby bearing the hopefuls’ wishes to their ancestors.

Also Read: What To Do Within the Butter Yellow Walls of the Old Town In Hoi An, Vietnam

This annual Lantern Floating Festival is celebrated on Memorial Day in Hawaii, Honolulu. This visually captivating festival brings thousands of residents and visitors together on the beach to pay tribute to their deceased loved ones. This one-day spectacle includes an elaborate ceremony of symbolic shell-blowing, onjiki (strewing of flower petals) offerings to provide remembrance and compassion to deceased souls, and a series of traditional performances by local groups. In the end, as the sun sets, floating lanterns are sent out to the sea carrying wishes of happiness, good fortune and hope.

The Pingxi Lantern Festival takes place every year in Taiwan’s Pingxi District on the first full moon of every Lunar New Year (typically in February or March). The festival is also celebrated in rural villages of Jington and Shifen (the festival’s largest event takes place in Shifen). At both these villages, thousands gather to scribble their wishes on enchanting colourful paper lanterns before releasing them into the sky. The release of the lanterns, which also commemorates the Chinese New Year, is considered a symbol of embracing the future optimistically. Pingxi, a mountainous region located approximately one hour east of Taipei, allows its visitors to make a lantern any time of the year.

China’s annual Spring Lantern Festival is observed in February on the first full moon in the Chinese calendar. It marks the return of spring and the end of Chinese New Year. The history of the Spring Lantern Festival can be traced back approximately 2,000 years. It started with the emperor of the Eastern Han Dynasty who instructed all the households, temples and royal palaces to light lanterns on the 15th day of the first Chinese lunar month to show respect to the Buddha. Today, the festival is celebrated across the country and even abroad as it is a vital part of Chinese culture. An important national event, the festival symbolises the reunion of the family. From Shanghai to Guangzhou, the festival’s specific customs vary regionally, but the most prevalent ones include lighting (and hanging) lanterns that illuminate the whole city, competitions of guessing riddles, eating tang yuan or ball-shaped dumplings, and watching traditional lion dance performances on the streets.

Which Of These Lantern Festivals, Have Made It To Your Bucket List?

As you can see, just because you have been part of one lantern event, doesn’t mean you have seen them all. Even if you’ve visited these places, you might have missed one of these gorgeous lantern festivals. So, plan a trip around the same time as these breathtaking events, to enjoy watching hundreds of lanterns floating across the sky or on the water. If we have missed your favourite lantern festivals, let us know in the comments below!