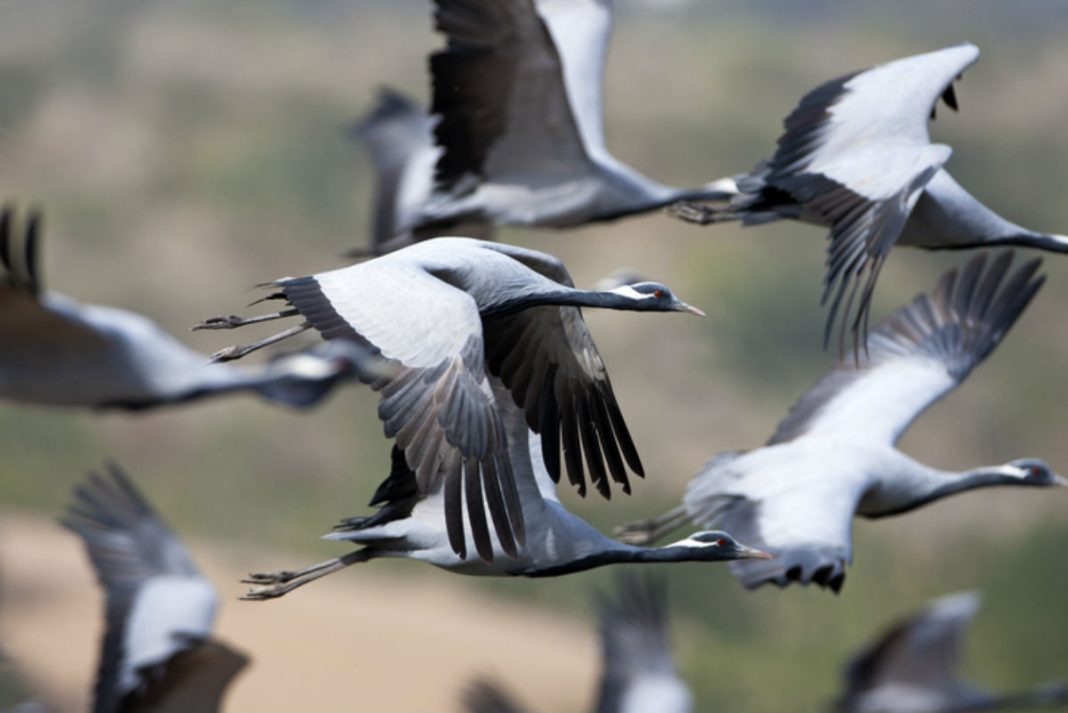 Every Year, an annual awareness campaign called World Migratory Day is organised to highlight the need for the conservation of migratory birds and their habitats. Initiated in 2006, the campaign is organised by The Convention on Migratory Species (CMS), the African-Eurasian Waterbird Agreement (AEWA) together with Environment for the Americas (EFTA). From 2018, it is to be observed twice a year:  on the Second Saturday in May and in October in order to reach out to a broader audience and amplify its message for bird conservation. On this day, every year people across the globe take action and organize public events like bird festivals, exhibitions, education programmes, and bird-watching excursions to celebrate World Migratory Bird Day. This year’s theme is “Protect Birds: Be the Solution to Plastic Pollution!” and aims to put a spotlight on the negative impact of plastic pollution on migratory birds and their habitats. We have compiled a list of the best places in India where you can see Migratory Birds from different parts of the world:

Here Are The Best Places To Spot Migratory Birds In India:

Keoladeo Ghana National Park or most popularly known as Bharatpur Bird Sanctuary in Rajasthan is an important wintering ground for Palaearctic migratory waterfowl. It also has a large congregation of non-migratory resident breeding birds such as Magpie Robins, Lapwings, Herons, Spoonbills, Water Hens, Egrets and the most famous Sarus Cranes. Covering an area of just 2,873 hectares, the National Park consists of grasslands, woodlands, woodland swamps and wetlands. The sanctuary is a UNESCO World Heritage Site and once used to be famous as the wintering ground of the Siberian Crane. 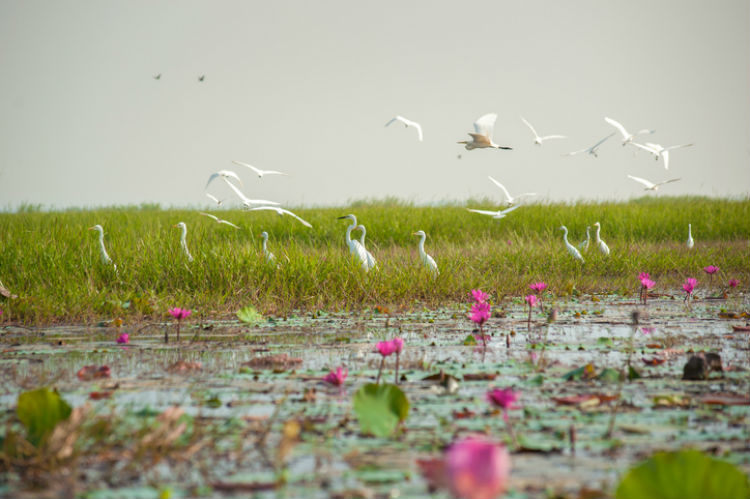 Located close Odisha, Chilka Lake Bird Sanctuary is spread over a huge area of 1100 square kilometres and plays host to around 9 lakh migratory birds during winter months. It is a large ecosystem of brackish water lagoon and also has two islands namely Nalaban and Mangalajodi, where one can see a variety of birds. A natural paradise for bird lovers, the Chilka Bird sanctuary is home to waterfowl, waders, flamingos, herons, Geese, ducks and 14 types of raptors. While you’re there, don’t miss the Pintail Duck from Siberia’s Caspian region and the red-crested Pochard Duck from Lake Baikal.

Located on the banks of Vembanad Lake, Kumarakom Bird Sanctuary is another favourite destination of native as well as migratory birds in India. Also popularly known as the Vembanad Bird Sanctuary, this beautiful bird sanctuary is a dreamland full of ecstasy and delight for bird watchers and nature lovers. It hosts numerous migratory birds during winter months such as the migratory Siberian crane, cuckoo, owl, egret and water duck. What makes this sanctuary unique is that you can rent houseboats or motorboats for bird watching! 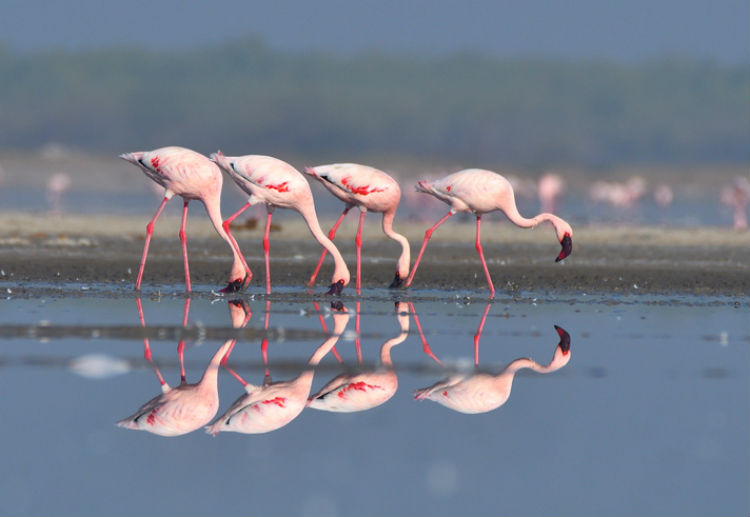 The Little Rann of Kutch is the southern extension of the Great Rann in Gujarat and is known to host many migratory birds during winters. Known for its rich wildlife, biodiversity and grassland ecosystem, Rann of Kutch and its Banni grasslands host a rich diversity of avifauna and important grounds for migratory cranes, flamingos and other species of migratory birds. Some of these migratory birds found here include Common Crane, Demoiselle Cranes, European Roller, Lesser Florican, Greater Hoopoe Lark, Collared Pratincole, Red-necked Phalarope, Cream-colored Courser and Dalmatian Pelican. Little Rann of Kutch is also famous for Asiatic Wild Ass but you can also spot Houbara Bustard, cranes, Macqueen’s Bustard, Sociable Lapwing and reef egrets.

A part of the Kameng Elephant Reserve, Eaglenest Wildlife Sanctuary is home to almost 454 species of Himalayan birds including blue jay, Bugun liocichla, tragopan and group of finches. The high altitude sanctuary in Arunachal Pradesh is located on the Himalayan foothills and is known to be a bird-watching destination. Due to its commendable biodiversity that contains a wide range of flora like bamboo thickets, alpine forests and evergreen trees, Eaglenest Sanctuary is a paradise for any nature lover. It is very special for small birds like Tit, Sibia, Nuthatch, Yuhina and Bush Robin.

Located just 64 km away from Ahemdabad, Nalsarovar Bird Sanctuary in Gujarat is the largest wetland bird sanctuary in the state. The sanctuary consists of a sprawling lake and a large marshy area around the lake, making it a hotspot of migratory birds during the winter months. These migratory birds include rosy pelicans, purple moorhen, waterfowls, heron, flamingos and species of bitterns, crakes and grebes. It also

Located in the state of Karnataka, the Ranganathittu Bird Sanctuary in Srirangapatna consists of six isolated islets on the banks of the Kaveri River in Karnataka. It is the largest bird sanctuary in Karnataka that attracts a large number of exotic migratory bird species such as Woolly-necked stork, great stone plover, river tern White Ibis, Partridge, Spoonbills, Egret and others from Siberia, North America and Australia. A 16-km drive from Mysore City, the sanctuary is also home to a nearly 200 species of birds.

Skip the beaches this time, and visit its Salim Ali Bird Sanctuary in Goa which one of the most popular spots to watch migratory birds in winter. The sanctuary was named after the famous ornithologist and consists of mangrove forest trees along the western tip of the island near the Mandovi River. The damp ecosystem is a breeding ground for many types of local and migratory birds. The sanctuary also has a paved trail through the jungle, great for walking and cycling; while you can also take boat rides through the mangroves.

Some Interesting Facts About Migratory Birds

Migratory birds can travel as far as 16,000 miles and they can touch speeds of 30mph to reach their destination. These birds can sometimes take upto 500 hours to reach their destination. While we may assume that birds travel low, where we can see them, a lot of migratory birds travel at very high altitudes. Geese and vultures can travel at altitudes of 29,000-37,000 feet high. Scientists are of the opinion that birds to choose to travel at such high altitudes as they can glide and conserve more energy as opposed to when they are flapping their wings. Migratory birds use the stars, the sun, and earth’s magnetism to help them find their way during their long journeys. They nearly always return to the place where they were born.

These birds build body fat over time to prepare for their long migrations. They manage to store their food and reserve nearly 50 per cent of their body weight. Migratory birds mostly travel during the night when the air is cooler. They also feel safer travelling at night as their predatory can’t spot them that easily. Certain birds like cranes, however, prefer to fly during the day. The journeys they take are often filled with major obstacles including dehydration, starvation,windmills, power stations, and drastic climate changes.

Which bird migrates to India annually?

India is a winter home for most of the Siberian birds such as Siberian Cranes,Greater Flamingo and Demoiselle Crane. Species such as white ibis, several species of egrets and herons, fly to Delhi from warmer climes.

Where are migratory birds found in India?

Migratory birds are found across states in India including Rajasthan, Goa, Karnataka, Gujarat.

Which birds are migrating?

What are migratory birds give one example