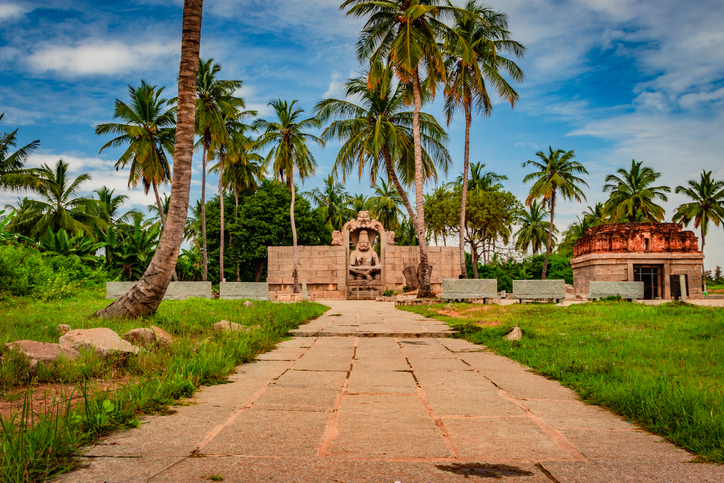 A UNESCO World Heritage Site, it is a spiritually important location in India as it is believed that this is the place where Rama first met Hanuman. Besides its unique history, the religious significance of this region makes Hampi a location of global repute. Tourists from all over the world travel to see these architectural wonders which spread out over a vast area.

A visit to these ancient temples of Hampi that stand as a reminder of the great medieval era will re-impose your faith. Here are the top 12 temples in Hampi that you must not miss out.

Also Read: A complete guide to what to see and do in Hampi

The Top 12 Temples In Hampi

Built in 1534 AD, the Achyutaraya Temple also known as the Tiruvengalanatha Temple is one of the major temples in Hampi built during the Vijayanagara empire. Sandwiched between Matanga and Gandhamadana hills, this temple is dedicated to Tiruvengalanatha, a form of Lord Shiva. Featuring modern architecture, many carvings are seen on walls, pillars, and monolith blocks of the temple which depict mythological legends. Although the temple is in ruins, it does not fail in grandiosity even today.

Housing the largest monolithic shiva linga in Hampi, the Badavilinga Temple is one of the most famous temples in Hampi.  A major attraction in Hampi, the big shiva linga is located close to Lakshmi Narasimha Temple. Believed to exist since the Vijayanagara empire, the shiva linga stands at a height of 3 metres and is carved from black stone. With a three eye mark drawn on it to depict the three eyes of Shiva, the shiva linga is constructed in such a way that the whole chamber becomes flooded with light.

Located on the banks of the Tungabhadra river at Hampi, the Virupaksha temple or Prasanna Virupaksha temple was built during the 7th century. A UNESCO World Heritage site, the temple is abode to Virupaksha, another form of Shiva. Constructed by Lakkana Dandesha’s assistance under King Deva Raya II, this temple of Hampi is a haven for architecture enthusiasts. Adorned with the carvings of Vishnu and Shiva, the walls of this temple depict mythological representations from the epics ‘Ramayana’ and ‘Mahabharata’.

Dating back to the 16th century, the Vithala Temple is a splendid example of rich architecture. The famous iconic symbol of the architecture of Hampi, the stone chariot is found inside this temple. Located just behind the chariot, the main temple has beautiful carvings. With an impressive arch of carvings depicting various gods in different forms, the main gate of this temple in Hampi opens into a large courtyard.

An important religious attraction and famous temple in Hampi, Kadalekalu Ganesh is located on Hemakuta Hill. Featuring traditional stone architecture, it has one of the largest monolithic statues of Ganesha in the world, at a height of 15 feet. It is named Kadalekalu because the belly of the deity is chiselled to look like the Bengal gram (kadalekalu).

Situated on top of the Anjaneya Hill, the Monkey Temple also known as Yantradharaka Hanuman Temple is dedicated to Hanuman. Situated inside a cave, this sacred temple in Hampi for Hindus is 500 years old. The idol of Hanuman was installed by Sri Vyasaraja, the Rajaguru of the Vijayanagara Kingdom. To reach the temple, you’ll have to climb 570 steps. In front of the Hanuman Temple, there is a fig tree where some snakestones are worshipped.

Lakshmi Narasimha Temple is a major tourist attraction in Hampi which is visited by tourists throughout the year. This temple in Hampi features the biggest effigy of Narasimha seated upon the sheshnaag (the seven-headed snake) beside the goddess Lakshmi. Built during 1528 AD, the statue is currently housed at the Archaeological Museum at Kamalapura.

Dedicated to Rama, Hazara Rama Temple is located in Hampi. A World Heritage monument, its intricate carvings of gods and goddesses attract tourists from all over the world. This beige granite temple of Hampi dates back to the 15th century and depicts illustrations from the ‘Ramayana’. As you stroll leisurely through the magnificent temple, don’t forget to click pictures to cherish moments.

9. One Of The Oldest Temples In Hampi: Hemakuta Hill Temple Complex

Situated in the southern side of Hampi, the Hemakuta Hill houses a temple complex dedicated to Shiva. Constructed between the 9th and 14th centuries, they are one of the oldest temples in Hampi predating the famous Vijayanagara empire. With more than 35 distinct temples made with stone walls, the carvings at these temples reflect the religious history of India.

Located in the southern part of Hemakuta Hill, Sasivekalu Ganesha is a temple in Hampi that has a gigantic monolithic statue of Ganesha which is over 8 feet tall. Created in the memory of King Narasimha II, the statue was carved out of a single block of rock. It is often said that the belly of Ganesha resembles the shape of a mustard seed and hence this temple was named Sasivekalu (mustard seed).

A Jain temple, Ganagitti Temple in Hampi is located on Kampli road. One of the earliest structures constructed during the reign of the Vijayanagara empire, this temple is visited by a large number of tourists. Standing strong since 1386 AD, Ganagitti Temple is a well-renowned temple among the locals.

Dating back to the 13th century AD, the Saraswati Temple situated in the district of Bellary in Hampi is dedicated to the goddess Saraswati. The crawling baby Krishna’s carving can be seen on the temple tower. Full of minute carvings, the walls and pillars of this temple in Hampi tell the tales of history. The terracotta figures of this temple in Hampi are now almost in ruins.

Why Should You Visit These Temples?

The breathtaking scenery in Hampi is a magical and ideal setting for the temples of the Vijayanagara empire. One can find numerous temples all across Hampi, as Hinduism is the most practised religion here. Each temple in Hampi has been preserved for centuries to retain the glory of its past. You can walk through the town or even better—rent a bicycle and pedal through the city of ruins.

Here are a few tips for a pleasant experience at these temples in Hampi:

An epitome of architectural finesse, these old medieval ruins including ancient temples are worth visiting at least once in a lifetime. For your getaway in Hampi, do keep these temples in your itinerary to ensure a memorable travel experience.

Also Read: 11 incredible ancient temples in India that are worth a visit