More
Home Topics of Interest Food & Drinks Bidadi’s Thatte Idli: Have You Tried It Yet? 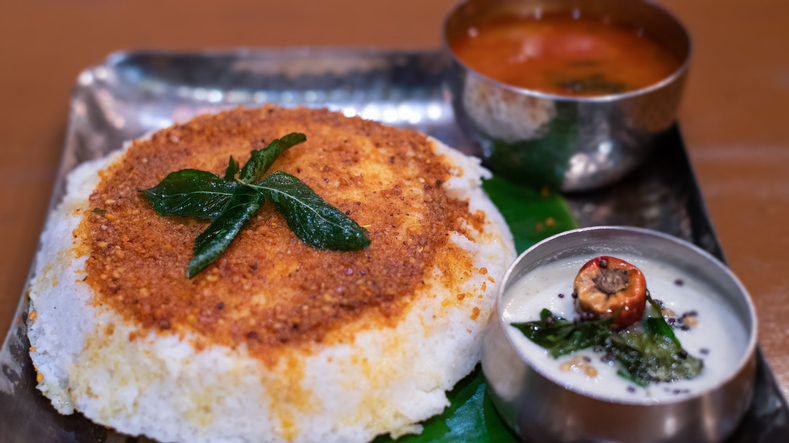 Breakfast is the most important meal of the day and nothing beats soft, fluffy idlis as the first meal of the day. A plate of fluffy idlis with a mildly spiced coconut chutney and a vegetable sambar is the stuff of perfect starts. And when it’s thatte idli served with some mutton chops curry or coconut chutney, it’s a breakfast made in heaven! Every south Indian is obsessed with these fermented and steamed rice cakes. But Bidadi, the industrial town on the outskirts of Bangalore, takes this obsession to a whole new level. Let’s take a look at what’s so great about this flat idli.

Also Read: How many of these authentic Indian breakfast dishes have you tried?

The industrial town of Bidadi lies a mere 34 kilometres from Bangalore on NH 275. As you drive towards Mysore, you’ll see several tiny restaurants on the roadside in Bidadi. These are small restaurants, jam-packed with vehicles and people, especially at breakfast time. These restaurants are the home of the famous Bidadi thatte idli. These busy restaurants churn, cook and serve plates of the flat idli throughout the day with the same precision as the factories nearby.

What Makes This Idli So Different?

While it looks quite similar to the regular idli, the larger, flatter idli in Bidadi is more porous and spongy. The idli gets this texture because of the sabudana (tapioca pearls) that is added to the batter. The ground batter is fermented overnight and steamed the next day in small, flat plates. The spongy flat discs of deliciousness are served hot with a dollop of soft butter on top and a mildly, spiced coconut chutney on the side.

Where To Get A Taste Of The Fluffy, Flat Idli In Bidadi

The highway is chock full of restaurants on both sides of the road as you near Bidadi. All of them claim to sell the best idli in town. But don’t be fooled. The best way to spot the best restaurant for the flat idli is to check for those that are the most crowded.

Shree Shivasagar Bidadi Bisi Thatte Idli Hotel is a very popular hotel on the Mysore-Bangalore highway. The popular joint is jam-packed with people enjoying a plate of the delicious plate idli with coconut chutney and uddin vada for breakfast. The place can get really crowded and sometimes people use their vehicle’s bonnets as a table during rush hour. A plate of idli and vada with chutney and sambar costs around INR 40 here.

Craving some mutton curry for breakfast? Head to Sri Renukamba Bidadi Thatte Idli for some hot thatte idli served with a spicy mutton chops curry. The joint is well known for its extremely soft and fluffy idlis. Order yourself a plate of idli and mutton chops. Tear a piece of the fluffy idli, scoop up a good helping of mutton curry and savour the explosion of flavours in your mouth. The restaurant also has several spicy mutton based dishes on their menu, which pair well with their fluffy idlis.

There are several other thatte idli joints that are equally popular. The Shiva Darshins Shashi Thatte Idli hotel is another popular joint. The restaurant is located right next to Shree Shivasagar Bidadi Bisi Thatte Idli Hotel on the highway. Sri Annapoorneshwari Hotel Bidadi Bisi Thatte Idli is another popular joint to get some soft, fluffy idlis for breakfast on the highway. The Jai Bhuvaneshwari Military Hotel is another very popular joint for hot thatte idlis and mutton chops curry. Although the restaurant is in Srirangapatna, their heavenly idlis ensure that it gets a mention here.

Can’t go to Bidadi? No problem, you can bring the taste of the Bidadi’s idli to your kitchen with this simple recipe.

Check out the original recipe for the idli here.