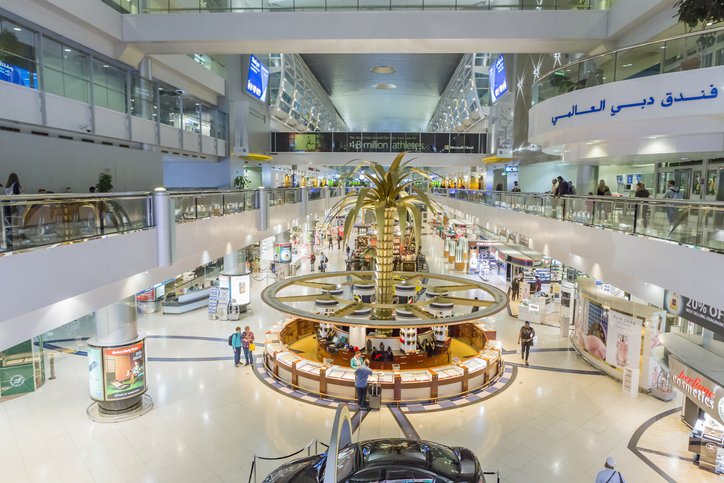 Airports today aren’t quite as bustling and busy as they once used to be, thanks to the global pandemic that has shut most domestic and international borders. While we view airplanes as just a mode of transportation, airports are doing to their best to elevate a passenger’s experience. With world cuisine on offer, some of the best shopping deals, luxe spas and lounges, the busiest airports in the world might just be your next favourite destination.

Here Are The World’s Busiest Airports

It’s the busiest airport in the world with a total volume of 110,531,300 passengers in 2019. The airport has two terminals. But what makes it special is beyond its passenger numbers. You can enjoy live music and art exhibits. Hartsfield-Jackson Atlanta International Airport hires 11 musicians to play in different areas of the airport. The busiest airport in the world has been transformed into an art gallery, by collecting and displaying beautiful works for over 40 years. The collection features permanent pieces by famous artists like Colleen Sterling, Steve Waldeck, and Radcliffe Bailey among others. Rotating exhibits by students and different artists are also featured. These include photographs, sculptures, paintings, as well as art installations. The airport has become Atlanta’s biggest art gallery. Furthermore, you can enjoy a massage or stay at the Minute Suites that invites passengers to sleep, work, and relax for some time.

More than 70 airlines utilise the airport’s services across the three terminals of Beijing Airport. The airport saw the passenger volume of 100,011,438 in 2019. The second busiest airport in the world has facilities like a mini-spa offering massages that teleport your mind to heaven. It also has two gardens with fish ponds in it. Terminal 3 of the Beijing Capital International Airport happens to be the gateway to achieve zen—the  bridges and pavilions in these gardens are inspired by the Summer Palace in Beijing. You can relax and unwind between long flights. You can also feed the fish with food provided by airport staff, and enjoy dance and musical performances. There are mini basketball hoops to keep children  engaged, while parents can relax in the reclining chairs nearby.

3. A Bit Of Everything And A Bite Of Heaven: Los Angeles International Airport (LAX)

With nine terminals and passenger numbers of 88,068,013 in 2019, LAX is the third busiest airport in the world. Like the airport in Atlanta, Los Angeles International Airport (LAX) has an amazing art collection, features live music and other special performances for passengers. The airport displays  paintings and sculptures, some permanent, and presents 20 exhibits every year. Aviation enthusiasts can visit the Flight Path Museum situated on the airport property. The Proud Bird Food Bazaar and Events Centre also makes the airport a vibrant place. The place is both a restaurant and has banquet halls to organise events. The restaurant has a history of over 50 years. It was first built in 1967 to commemorate aviation achievements and offered a view of the runway so the spectators could watch airplanes that were landing in LAX. What makes it one of the busiest airports in the world is its proximity to hotspots in the city. Beaches like the Dockweiler Beach, near Manhattan and Venice Beach are not very far. Furthermore shopping centres like Rodeo Drive, Santa Monica Place and Abbot Kinney Boulevard are also close by.

Especially known for its wide range of shopping options, Dubai International Airport (DXB) is the fourth busiest airport in the world. DXB had passenger volume of 86,396,757 in 2019 and operates with three main terminals and Dubai World Central. DXB charms passengers with luxurious amenities and a great duty-free shopping experience. Luxury brands like Gucci, Chanel and Jimmy Choo sit side by side at DXB with gold, electronic, and gourmet food stores. Food is a major attraction at the airport. There are around 135 outlets with cuisines from all over the world. The DXB doesn’t just have a spa, it also has a health club with a swimming pool, sauna, gym, jacuzzi, and steam rooms. You can also laze around the Zen garden or sleep pods with roll-down roofs. It is tough to be one of the busiest airports in the world but Dubai makes it look easy.

To be one of the busiest airports in the world needs high innovation, and Japan is very creative, with 85,505,054 passengers streaming through it in 2019. Having a wide variety of food and different cuisines usually make airports stand out, but what makes Tokyo Haneda Airport unique is that you can enjoy these culinary delights under the stars. The airport has a unique planetary dome with a café and bar attached to it. And the surprises don’t stop here. Look out for the Haneda Nihonbashi bridge. It’s a reconstruction of the original 17th-century canal bridge in Tokyo, and very significant to the Japanese. The bridge is the starting point of the five roads that lead in and out of Tokyo and stands as a symbol for Tokyo’s connection with the world. Across the bridge at the Tokyo Haneda Airport is Edo-koji street, a completely traditional space, and a contrast to the new age Tokyo Haneda Airport. It is a walk down memory lane and represents Japan in the Edo period. Further ahead is the Festival Plaza where you purchase wooden labels called ema inscribed with good wishes, to put up on the wall. This might be right up your alley with two great Japanese restaurants and 18 shops selling authentic Japanese beauty products and other goods.

Food always finds a way to our hearts. With 122 food and beverage outlets, Chicago O’Hare Airport has reached many people’s hearts and thereby earned its place among the busiest airports in the world with 84,649,115 passengers visiting it in 2019. Some local picks like Chicago Style Hot Dogs and Garrett Popcorn Shops must be visited. This is where you must try the city’s special dishes like the Chicago deep-dish pizza! The airport also has a spa and health club facility to burn off pizza calories. If you have more time, you can step out of the airport and explore Chicago’s cultural side and attend a Broadway musical or a stand-up comedy performance.

Also read: Check out these airports that have the best food

If you’ve been fascinated by aviation, London’s Heathrow Airport offers an observation deck, View Heathrow. The South Runway is on display here, with a 270-degree panoramic view. Binoculars are also provided by the airport. The airport is also well known for its tech-driven art pieces, by modern artists like Troika and Oona Culley. London Heathrow Airport is one of the busiest airports in the world, with 206,800 passengers per day and 80,888,305 passengers in 2019. It encourages retail therapy with iconic British brands like Mulberry and Smythson offering the best luxe souvenirs possible. The airport is also home to the Virgin Atlantic Clubhouse for people not travelling on a budget. The clubhouse is magnificent with chandeliers and luxurious lounges. It has amenities like a movie theatre, a library with WiFi, and a Sky Lounge among other things.

The eighth busiest airport in the world is one of the two international airports in Shanghai, with 76,153,455 passengers passing through in 2019. It is also among the busiest airports in Asia. The airport has ample outlets of duty-free shops for cosmetics, liquor, and perfumes as well as luxe boutiques to indulge in. Hop into one of the airport jacuzzis to chill a bit. There are also many tourist attractions close to the airport. The Bund, a major waterfront with historically significant buildings, is just 1.9 miles away. If you want a whole new experience, take the Maglev train (known for its magnetic levitation) to reach the outskirts of the city in eight minutes.

Airports are no longer “just airports”. From spas to art galleries, these airports have transformed themselves into oases of calm and comfort. Most of us use airports for travel, and seldom appreciate the facilities they offer. But the next time you find yourself in transit, look up from your boarding pass and take a moment to revel in their luxurious facilities.