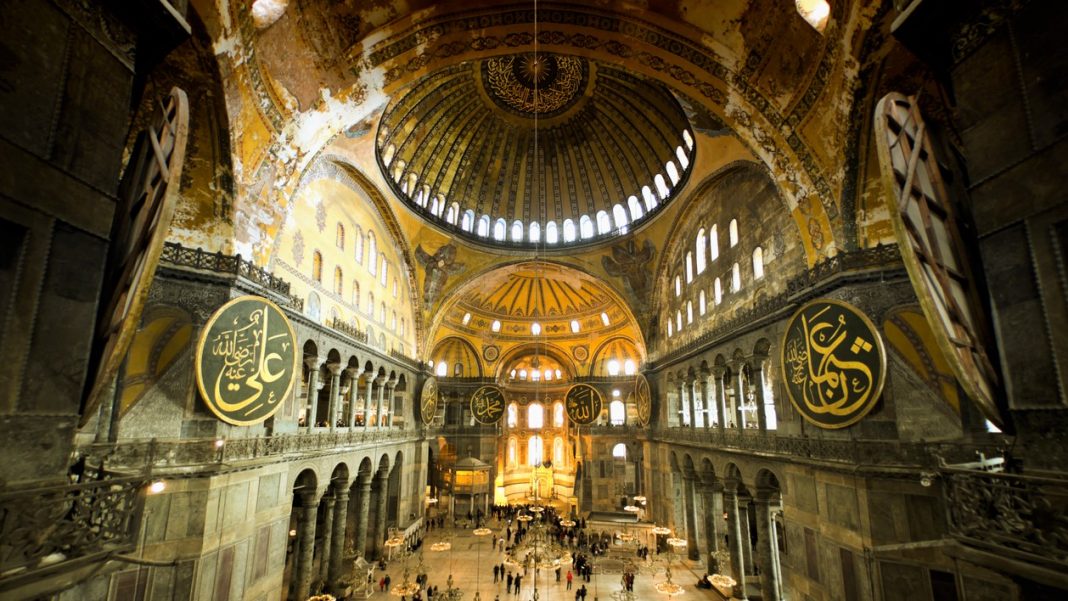 The Byzantine Empire flourished between the 4th and 15th centuries and left behind many beautiful Byzantine buildings. Also known as the Eastern Roman Empire, it was founded by Constantine the Great. He rebuilt the city of Byzantium, the eastern capital of the Roman Empire. It was later renamed Constantinople.

Byzantium survived the fall of the Western Roman Empire and spread across present-day Greece, Italy, and Turkey. Byzantine buildings can be found across these countries. However, many of these famous buildings have fallen into ruin or endured subsequent modifications.

Built on the site of an older 4th-century church, the Hagia Sophia (meaning “Holy Wisdom”) is a landmark of Istanbul (and Constantinople before it). Initially a Greek Orthodox Church and then the Ayasofya Mosque (after the Ottoman conquest of Constantinople in 1453), it is now a museum. It was built in the 530s, after a fire during the Nika riots destroyed the previous church. The Hagia Sophia is the most impressive surviving example of Byzantine architecture. It sits next to the Sultan Ahmed Mosque or the Blue Mosque.

The Basilica of Sant’ Apollinare Nuovo in Ravenna, Italy was initially built by Theodoric the Great, King of Ostrogoths in the early 6th century. Originally a church of the Arian cult, it was dedicated in 504 AD to “Christ the Redeemer”. When Byzantine Emperor Justinian I conquered Italy, he rededicated it to Saint Martin of Tours, calling it “Sanctus Martinus in Coelo Aureo” (“Saint Martin in Golden Heaven”). It was renamed again in 856 AD when it became home to the relics of Saint Apollinaris. They had previously been housed at the Basilica di Sant’ Apollinare in Classe (pictured). The basilica is a UNESCO World Heritage Site.

The Hagia Irene (meaning “Holy Peace”) is one of the earliest churches built in in the Byzantine capital. It was commissioned by Roman Emperor Constantine I towards the end of his reign. Completed in 377 AD, it supposedly sits on the site of a pre-Christian temple. Like the more well-known Hagia Sophia, it was destroyed during the Nika riots in 532. Hagia Irene was rebuilt by Emperor Justinian I in 548, and restored by Constantine V after an earthquake. It is located in the outer courtyard of the Topkapı Palace and is one of the few churches in Istanbul not to have been converted into a mosque.

Hosios Loukas is a 10th-century monastery situated on the slopes of Mount Helicon near the town of Distomo, (near Delphi) in Greece. One of the finest examples of Middle Byzantine buildings and architecture, it was built during the rule of Macedonian dynasty. The monastery was founded by a hermit, Venerable St Luke (not the Evangelical Saint Luke of the Gospels), who predicted the conquest of Crete by Emperor Romanos. It is full of lavish mosaics, frescoes and marble work. The church is set out in a cross-in-square plan, the oldest of that style in mainland Greece. The monastery’s Church of the Theotokos and the main shrine to St Luke (who died in 953 AD) have always been a major destination for pilgrims. The Hosios Loukas adjoins a larger cathedral church or Katholikon.

The Church of Holy Apostles in the old town of Thessaloniki, Greece, is one of the most beautifully preserved Byzantine churches of the late period.  While its date of construction is still unclear, this 14th-century church seems to have been part of a larger monastery. Its exterior walls are intricately decorated with complex brickwork patterns and glazed ceramics. However, the interior features rich mosaics and frescoes, some of the last examples of Byzantine mosaics. When the area was conquered by the Ottoman Turks, it was turned into a mosque; the Soğuksu Camii (“Mosque of the Cold Water”). Like all the other lavish churches they converted, the Ottomans covered the mosaics and frescoes with plaster.

Like the Basilica of Sant’ Apollinare Nuovo in Ravenna, the Basilica of San Vitale was also originally built by Bishop Ecclesius in 526 under the Ostrogoths. It was completed by the Bishop of Ravenna in 547 under the Byzantines. It was sponsored by Julius Argentarius, a banker and architect who also sponsored the Basilica of Sant’Apollinare in Classe. The Basilica of San Vitale is said to have been built on the site of the martyrdom of Saint Vitalis (also known as Vitalis of Milan). The church is filled with spectacular mosaics, some of the finest and best preserved in the world. Among these are two panels depicting Emperor Justinian I and Empress Theodora respectively. Dressed in royal purple, they are accompanied by vast entourages of court officials and clergy.

These amazing Byzantine buildings are all that remain of the splendour and glory of the Byzantine Empire and its unique architectural style. Mostly developed under the rule of Justinian I, in the 6th century, it later inspired both Renaissance and Ottoman styles. You can also check out the equally amazing Mughal Buildings.