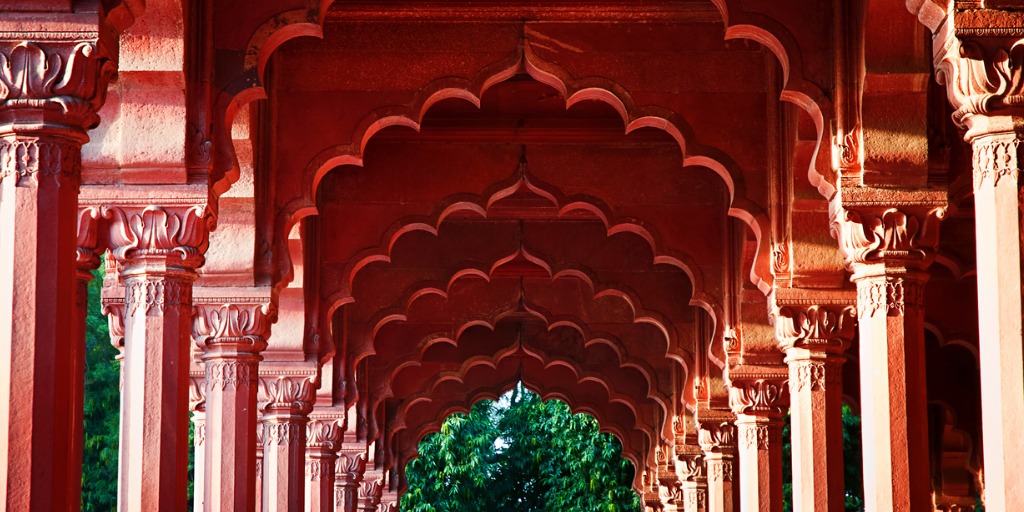 Mughal buildings can be seen throughout what was once the powerful Mughal Empire. Their unique architectural style blends Islamic, Indian and Persian elements to create elaborate and impressive buildings. In over 300 years of rule, numerous forts, palaces, mosques, mausoleums, gardens, and tombs were built across what is now India and Pakistan.

Mughal architecture reached its peak in the 16th and 17th centuries under rulers like Akbar and Shah Jahan, with Fatehpur Sikri and the iconic Taj Mahal. Here are 13 of the finest examples of Mughal buildings you have to see.

The Bibi Ka Maqbara is a replica of the Taj Mahal. It was built by Azam Shah, son of Aurangzeb, in memory of his mother, Dilras Banu Begum. The mausoleum is laid out in the shape of a hexagon and was completed in 1678. Located in Aurangabad, Maharashtra, it is sometimes called the Dakkhani Taj (Taj of the Deccan).

Located near Agra Fort, in Sikandra, is the tomb of perhaps the most famous Mughal Emperor, Jalal-ud-din Muhammad Akbar. It is built of deep red sandstone, much like Akbar’s other buildings at Fatehpur Sikri. Nearby lies the tomb of one of his wives, Mariam-uz-Zamani, mother of his successor Jahangir.

Another of Akbar’s many Mughal buildings is the Lahore Fort. Built on the site of an earlier citadel, this UNESCO World Heritage Site has been modified numerous times over the years; the last time was by the British during colonial times. Don’t miss the fort’s iconic Alamigiri Gate, the massive Picture Wall, the Moti Masjid (“Pearl Mosque“), and the beautiful Sheesh Mahal (“Palace of Mirrors“) built by Jahangir.

Located amidst sprawling gardens in Delhi lies the tomb of the second Mughal Emperor, Humayun. The impressive mausoleum was built by the Emperor’s widow Hamida Banu Begum in 1570, 14 years after his death. Today, it is a UNESCO World Heritage Site. Located near the city’s Purana Qila (“Old Fort“), it is one of the earliest examples of a distinct Mughal architectural style. Architect Mirak Mirza Ghiyuath was influenced by both local architecture, as well as that of his homeland Persia.

When it was completed in 1673, the Badshahi Mosque was among the largest mosques in the world. Built by Shah Jahan’s son and successor Aurangzeb, it is near the Lahore Fort, separated from it by the Hazuri Bagh gardens. The building is reminiscent of the Jama Masjid in Delhi but on a larger scale. It can hold over 50,000 worshippers.

Built by Mughal Emperor Shah Jahan when he decided to move his capital from Agra to Delhi (then known as Shahjahanabad) in 1648, the sandstone Red Fort is one of the most impressive Mughal buildings. It served as the primary residence of Mughal rulers until 1857, when the last Emperor Bahadur Shah Zafar was exiled by the British. The Red Fort is filled with beautiful palaces, including the Diwan-I-Am, Diwan-I-Khas, Ranga Mahal, Moti Masjid and the Meena Bazaar. Today, it is a UNESCO World Heritage Site.

A few kilometres away from the Lahore Fort, the beautiful Shalimar Gardens were commissioned by Shah Jahan in 1642. The nearly 40-acre walled garden is laid out in the Persian style. It is meant to represent an earthly utopia, where humans coexist with nature. It was preserved by the Mian family until it became a UNESCO World Heritage Site in 1981.

Considered to be a prototype of the more famous Taj Mahal, the tomb of I’timād-ud-Daulah was built by Emperor Jahangir’s wife, Nur Jahan for her father Mirza Ghiyas Beg between 1622 and 1628. Known as the “Jewel box” or the “baby Taj Mahal,” it is constructed of red sandstone and has intricate marble decorations.

Like most other Mughal buildings, the Agra Fort is built of red sandstone. Built by Emperor Akbar in the 16th century over an earlier brick fort on the banks of River Yamuna. Akbar’s grandson Shah Jahan, who was fond of building with white marble, added to the fort, turning it into a palatial residence. However, he was usurped by his son Aurangzeb, and imprisoned here. According to legend, he died in the Muasamman Burj. This tower has a marble balcony with a view of his greatest creation, the Taj Mahal.

This town near Agra was founded by Emperor Akbar and served as his capital from 1571 to 1585. It was built in the site of an earlier village, Sikri, to commemorate Akbar’s victory in Gujarat. Thus, it came to be known as Fatehpur Sikri (“City of Victory“). Though the town was abandoned due to campaigns in Punjab, it is full of impressive Mughal buildings.

The Panch Mahal, filled with carved pillars; the tomb of the Sufi Saint Salim Chishti who predicted the birth of Akbar’s son Jahangir; the Hindu-inspired palace of “Jodha Bai,” (or Mariam-uz-Zamani), Akbar’s Rajput wife, with its glazed turquoise Multan tiles; and the magnificent Buland Darwaza (“Gate of Magnificence”). Built in 1601, this gate is decorated with carvings and quotes from the Quran.

Not to be confused with the similarly named gardens in Lahore, Srinagar’s Shalimar Bagh is located on the banks of Dal Lake. It was built by Emperor Jahangir for his wife Nur Jahan in 1619. It was later extended on the orders of his son, Shah Jahan, by the governor of Kashmir, Zafar Khan. The gardens have been used by successive rulers as a pleasure palace and a guest house and have also been called Farah Baksh (“the delightful“) and Faiz Baksh (“the bountiful“).

Widely regarded as one of the finest Mughal buildings, the Jama Masjid dominates the skyline of Old Delhi. It was built under Emperor Shah Jahan between 1644 and 1656 for over 1 million rupees and was originally called the Masjid-i-Jahan-Numa (“World-reflecting Mosque“). Its three great gates, four towers and two minarets are all built of red sandstone and white marble. The courtyard can fit as many as 25,000 people.

One of the most famous buildings in the world, the Taj Mahal is often referrs to as the crown-jewel of Mughal architecture. It was built between 1632 and 1653 as a mausoleum for Emperor Shah Jahan’s wife Mumtaz Mahal. Upon his death, Shah Jahan himself was buried there as well. The white marble structure combines Islamic, Turkish and Persian architectural styles, and is both a UNESCO World Heritage Site and one of the Seven Wonders of the World.