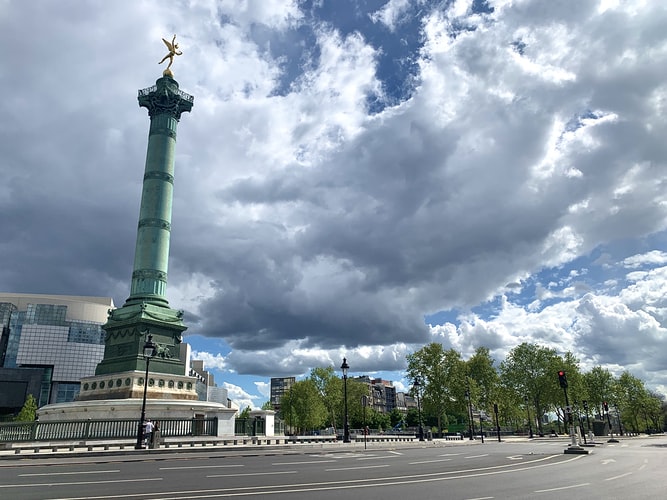 Filled with impressive attractions, mindblowing, architecture and hidden gems France is any traveler’s dream destination. With romance in the air, and home to the best croissants sightseeing in France is like diving into ancient history. Here you have a chance to experience remains of the old Roman Lutetia, magnificent medieval abbeys, gothic masterpieces, classical architecture, collections from the Napoleonic era. France also has a plethora of famous landmarks and French monuments and visiting them is ideal for a successful trip. From Roman ruins to Renaissance chateaux, and Gothic cathedrals to stunning bridges France has it all.

Undeniably the most iconic structure in France is the Eiffel Tower. Named after engineer Gustave Eiffel whose company was responsible for designing the tower, this Iron lady is one of the most visited French Monuments. Built-in 1889 and standing at 1063 feet tall it’s a french monument that has the highest number of appearances on Instagram. It was considered the tallest structure in the world until 1930 when the New York City Chrysler Building was finished. The Tower serves as a memorial for some of history’s greatest scientists, with the names of 72 engraved on the tower. When first built the tower was thought by many as “the ugliest building in Paris” but over time it’s France’s much-loved Landmark.

The home of the king of France, starting with Louis XIV in 1682 is the stunning Château De Versailles or Palace of Versailles. After the French Revolution in 1798, the palace no longer served as a residence and was eventually restored and became a historical french monument. The Versailles which used to be just a hunting lodge now sits on a total estate of 2,014 acres and receives over 10 million visitors per year making it one of the most visited France landmarks. The Versailles is of historic significance, as the Peace of Paris treaty was signed here in 1783.  A visit to the Versailles Palace will open doors to learning more about France’s history as you explore over 60,000 artworks that depict 5 centuries of the country’s past.

Located at Place Charles de Gaulle at the Champs-Élysées the Arc de Triomphe is a massive celebration of Roman architecture. Inaugurated in 1838 by the French King, Louis-Philippe, the Arch de Triomphe was dedicated to honouring the Fench army that fought the various wars during the Fench revolution as well as the Napoleonic wars. Designed by the architect Jean-François-Thérèse Chalgrin the french monument stands approximately 162 feet high, 150 feet wide, and 72 feet deep, and from the top of the Arch de Triomphe, you’ll be able to spot out most of the popular tourist attractions in Paris treating you to a whole new dimension of the French capital.

The square was once the site of the notorious Bastille prison until it was razed to the ground during the revolution from 1789 to 1790. A column now sits on the square and atop it sits the Génie de la Liberté (Spirit of Freedom) statue. Also known as the July column, it takes its name from the month of the revolution in 1830 when King Louis Philippe replaced King Charles X. The column is a memorial to the people who died during the three-day revolution.

This architectural marvel was built starting in 1546 by King Francis I and was originally designed as a castle for the royal family. Today with over 300,000 artworks and only 35,000 on display, the Louvre museum is the largest art and antiques museum in the world. Home to the famous Leonardo Da Vinci’s “Mona Lisa” painting, the Louvre museum receives over 15,000 visitors per day that want to get an up-close look at this famous piece. Some of the other famous pieces found in the Louvre are the statues the Winged Victory of Samothrace and the Venus de Milo and the paintings Liberty Leading the People, the Grande Odalisque. But it’s not the paintings or the sculptures that will enthral you, the Louvre has impressive architecture and is one of the must-visit French monuments.

Currently, the home of the French Senate, the Palais du Luxembourg, or Luxembourg Palace, was built in the 17th century as a home for Marie de Medicis, the mother of King Louis XIII. Designed by architect Salomon de Brosse the stately palace is a stunning example of both French classical and Renaissance architecture. The grounds surrounding the palace are the Jardins du Luxembourg, or Luxembourg Gardens, which are cover 25 hectares (about 61 acres) are both French and English gardens, as well as a pond, forest, apple orchard, 106 statues, and the Medici fountain.

Constructed in honor of the Virgin Mary  Notre Dame is the most impressive French Gothic cathedral. Translating to Our Lady of Paris the Notre Dame cathedral is the second most visited attraction in Paris after the Eiffel Tower. From large colorful windows, splendid sculptures, impressive church bells to one of the largest music organs in the world, Notre Dame sets itself apart from other cathedrals making it one of the famous landmarks of France. The cathedral suffered a terrible fire in 2019 and it caused severe damage. The cathedral is closed to the public while renovations are underway and it’s not certain when it will be reopened.

Know in English as the Basilica of the Sacred Heart of Paris, perched on Montmartre hill this Roman Catholic church and the minor basilica is the second most visited religious monument in France after the Notre-Dame cathedral in Paris. Built-in the Roman-Byzantine style of architecture this all-white building is home to one of the largest mosaics in the world called the Mosaic of Christ in Glory. Montmartre is the highest point of the city hence the Basilica can be seen far away from several places.

Also Read: 18 Underrated Towns In France You Have To See

Learn A Bit About France From Through Monument

Every monument that you visit in France will introduce you to the history of this fascinating country. From war memorials to monuments that marked important moments in history the journey you take will be a remarkable one. We would love to know if your travel stories to any of these stunning French monuments. Let us know in the comments below.