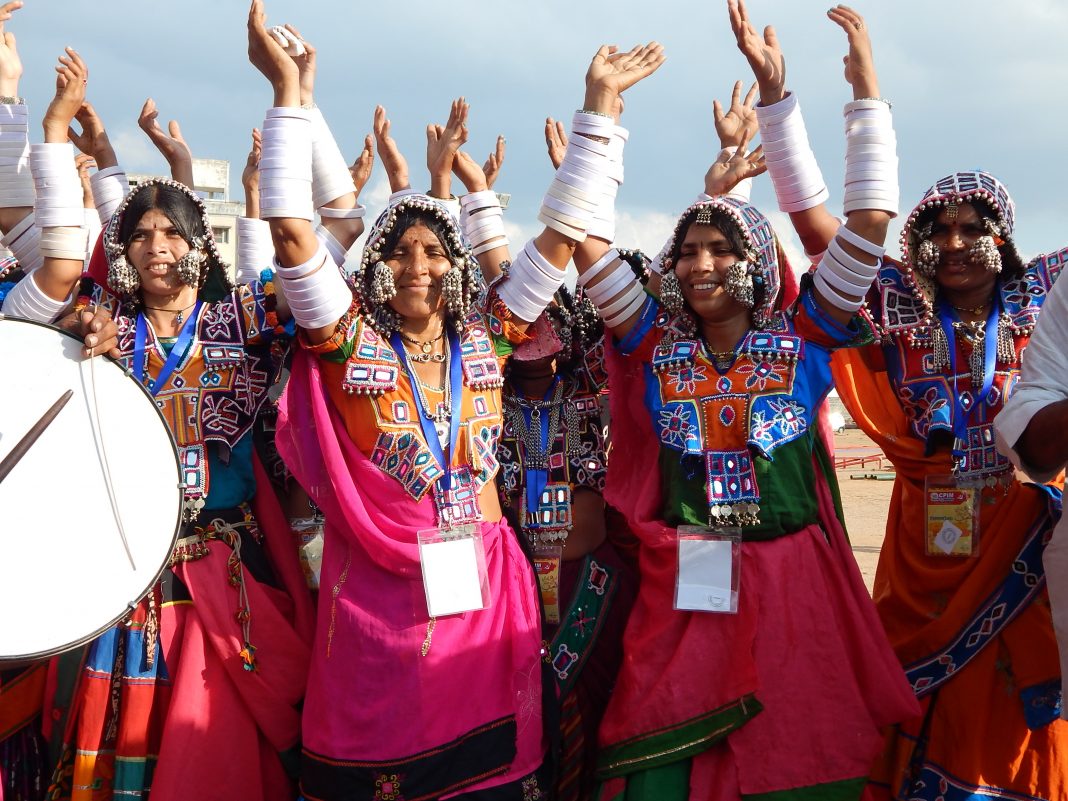 Folk dances of India reflect the culture, practices, and celebrations of the country’s many communities. India is well endowed with varied cultures, traditions, languages, and art forms. Artistic heritages like folk dances are passed down generations. Most folk dances of India are performed in a group, rejoicing an occasion such as a successful harvest, a religious occasion or a wedding. Folk dance is also used to tell local stories through the community’s music. It is a form of communal harmony, a way to express their joy or teach morals, so there is no rigid form.

Also read: 11 Folk Dances From Rajasthan You Must Experience

One of the most popular folk dances of India, bhangra is the folk dance of Punjab. Its high energy and fast beats make bhangra not just popular among Punjabis,but manages to put a smile across people of all cultures. The folk dance seems to be like a burst of happiness with dancers wearing colourful traditional clothes and turbans. Initially, farmers of Punjab danced the bhangra to celebrate the harvest festival, but as time progressed, no happy event or gathering was complete without bhangra. The folk dance is usually accompanied by live music played using a dholak (drums). Other instruments like sapp (a long wooden scissor that expands and retracts) and khunda (a long and thick stick) are used to make the dance more engaging. With Punjabis migrating to different parts of the world, the folk dance has received international attention too. Giddha is another famous folk dance from Punjab, which has more feminine grace and is performed by women.

The people of Gujarat perform garba during the festival of Dussehra. The folk dance honours the goddess Amba and celebrates womanhood. It’s performed by both men and women during Navratri, the nine day-long festival before Dussehra. Traditionally garba was performed to  devotional songs to the goddess Amba, but today Bollywood music has taken over. The folk dance is performed in the Hindu month of Ashvina which is around September or October. The dancers wear colourful dresses with beautiful embroidery and move in circles while clapping their hands and performing the steps. In olden times, the garbawas danced around a container filled with water or an illuminated clay lamp. Another folk dance from Gujarat is the dandiya, which is similar to garba but is performed with dandiya sticks.

Another one of the folk dances of India that is performed during the harvest festival, is bihu, in  Assam. The folk dance shares its name with the harvest festival. Both men and women dance to the tunes of instruments like drums, gagana (a bamboo instrument played using mouth), taal (percussion instrument), toka (bamboo slapstick) and more. The folk dancers wear traditional Assamese attire like the mekhala, chadar, dhoti and gamocha. Love songs are usually sung during bihu with dance movements that feature a swaying of hips, flipping of hands, and quick movements.

Yakshagana, from Karnataka, is a folk dance of India that can also be included in folk theatre. There are traces of yakshagana in the 15th and 16th centuries, but it was the 20th century that saw the art form rise to its glory. Yakshagana is a dance-drama that picks stories from Indian epics like ‘Ramayana’ and ‘Mahabharata’. The father of this folk dance is Parthi Subba. There is heavy make-up involved, to denote the characters of gods and demons. Red and black marks are used to identify demons. The word yaksha means demigod and gana means song. The narrative is controlled by the head musician called bhagavata and the music is played by musicians called himmela. The yakshagana starts with a sabha lakshana (prelude) and continues with prasanga (dialogues). The folk dance is performed in Kannada, Tulu, Hindi, English, Konkani, and Sanskrit.

5. From Deserts To The City Of Pearls: Lambadi, Andhra Pradesh And Telangana

A folk dance that hails from Andhra Pradesh is the lambadi dance where performers offer their gratitude to God for a good harvest. The Lambadis are a tribal nomadic community that migrated from Rajasthan’s deserts to various parts of Telangana and Andhra Pradesh. Lambadi women usually wear thick ivory bangles from their shoulders to the wrists, heavy metal jewellery, colourful skirts, and blouses that are embroidered with mirrors, and a dupatta on their heads. The lambadi folk dance is performed by women with men playing the music with dhol (drums) and sometimes joining them. The folk dance is identified with subtle and elegant movements.

Raas Leela is a folk dance that depicts the tales of Krishna, Radha, and gopis (Krishna’s consorts). The folk dance is performed during the festival of Janmashtami which is celebrated as Krishna’s birthday in the Hindu religion. Even though it is one of the folk dances in India with  roots in Uttar Pradesh, raas leela is also prevalent in Manipuri culture. The dance form denotes the love that people have towards Krishna. There are different types of Manipuri raas leela and since there are cultural differences between Uttar Pradesh and Manipur, the costumes, jewellery, and characterisation is different in both regions.

Lavani is believed to have thrived in the 18th century and under the rule of the Peshwas. It emerged in western Maharashtra. There are many types of lavani like the shringar lavani, adhyatmik, powada and more. Shringar lavani is a particularly sensual dance form. Adhyatmik lavani is performed for deities to seek their blessings. Powada, unlike the earlier types, expresses the prowess and valour of its male performers. Women drape nine-yard sarees in the Maharashtrian style and wear heavy gold jewellery. The fast beats of the dholak (drums) bring out the energy in these dancers.

Puli kali is performed at Kerala’s harvest festival, Onam, on the streets as a part of the procession. The dancers wear tiger masks and paint yellow and black stripes on their bodies. These folk dancers are encouraged to have large bellies, as that offers a wider canvas to paint  the stripes of the tiger. The folk dance does not have any complicated steps, but imitates the movements of a tiger following its prey. Other animals like zebras, leopards, and cheetahs are also painted. Puli kali is also performed in the Konkan belt, especially Mangalore and Udupi, but is known as pili yesa or pili vesha there. In Karnataka, the folk dance is performed during Navratri as the tiger is goddess Durga’s favourite animal and acts as her vehicle.

Read More: Explore the vibrant festival of Onam and how it is celebrated

10. A Tribal Dance That Is Also Martial Arts: Chhau, Odisha

Originating in Odisha, chhau is an integral part of east India’s culture. The folk dance is performed to celebrate the spring festival called the Chaitra Parva. There are three styles of folk dance—saraikela, mayurbhanj, and purulia. Chhau was originally a tribal martial art dance form. Performers of the folk dance form saraikela and purulia use masks, whereas mayurbhanj have wide movements. The purpose of the dance is to build bravery, fervour, and strength.

Also read: Famous Indian Classical Dance Forms For You To Learn And Flaun

Keeping Up With The Traditions

As India is gifted with an abundance of culture and heritage many folk dances have flourished in the country. Folk dances of India have ingrained meanings and significance that must be  respected. These dances must be remembered, cherished, and preserved through generations.