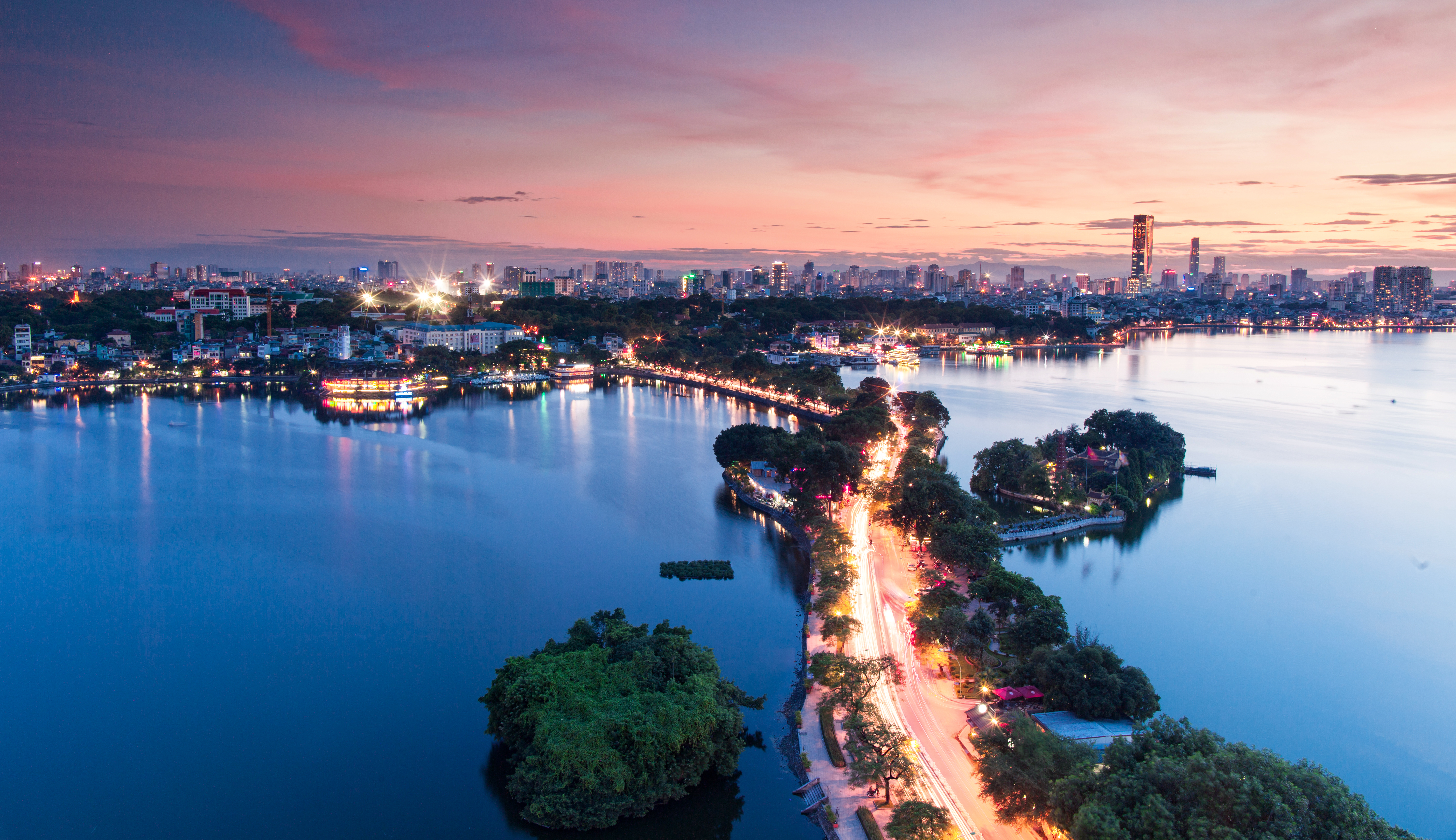 Lost between the confusion of the new world, the old world, cosmopolitanism, Buddhism, Catholicism, communism and American style Starbucks capitalism is Hanoi, the Capital city of Vietnam. Much to urbanization, we easily tend to forget this country was under duress 50 years ago.

On the global stage, this city remains underrated for its artistic influence. Artists here come in bursts, do what they can and disappear. For often someone new takes over the stage and does something even more different. The town is full of artwork, along the roads, on buildings, on the streets etc. Wherever the artists find their space and inspiration. These artists try to extract people’s thoughts on issues like freedom of expression, religious freedom, fight against tradition, new roles for women, etc. These issues lie very much on the surface, but art tries to brings it out in the open.

But like everywhere, artists here too have financial troubles, face the government’s rap and many endless problems that grip their work. People in Hanoi are very open, easy to talk to and are friendly, although this wasn’t the case 10 years ago. But people today, especially youngsters are travelling much, seeing and experiencing new things, speaking foreign languages, doing things they want and sharing their ideas. But despite all the pressures of the modern world, the music, love, food and culture makes Hanoi beautiful and a traveller’s abode.

On the Streets of Hanoi

On the streets, it’s a different story, with motorbikes and scooters coming in from all directions, like flocks of beeps. One came in from the wrong way, texting as he rides, crazy! What’s even crazier is to learn the art of crossing the road, no chicken task, it’s more like a dance form. So just rent a bike to roam around this energetic city, full of ideas. Only then your head starts spinning thinking where to start.

Hungry as always, I couldn’t think of anything better to do in Hanoi than looking for food. So it was food that really dragged me by the collar around Hanoi. Although if you are still looking for some cultural and heritage sites to visit here, be sure to check out some of these places – The Temple of Literature; The Opera House; The Ho Chi Minh Mausoleum; The Perfume Pagoda; and The Imperial Citadel

Going by the code, I stuck to the streets. Here it gets tricky, as only a few speak or understand English. To make things easier here’s a small vocabulary lesson to know what’s on offer in the streets of Hanoi.

Although Hanoi turns a stone with the advent of modernity, yet they tend to hold on a tight grip on their traditions.  The Vietnamese are culturally ingrained as a society. The streets have swanky restaurants and underground music hubs among other modern establishments mixed with vendors right next door selling worms, snails and frogs. People of all classes eat from these very streets, and you rarely find such indifference anywhere in the world. The Vietnamese unite in food!

Starting with the famous Egg-Coffee, I began my food journey. A creamy, luscious drink, although I’m unsure what it’s made of, the delicious taste of caffeine and sugar, was satisfactory enough.  Find any decent cafe around Hanoi and try it when you visit, absolutely worth it.

After the delicious Egg Coffee, finding food on the street was easy. The street stalls may not seem the best of places, ambient or hygienic, but trust me they are fine! Just stick to the code of eating on the streets and explore. First on the menu were the highly-recommended rice cakes (Bahn Xeo) topped with pork pieces. Bahn Xeo works for a healthy snack, not heavy on the tummy. Street eateries in Hanoi often write in block letters which signify what they are serving or their speciality dish. Use the vocabulary from above and enter your choice of food stall.

My local guy and I went searching the streets looking for Pho. It is a typical dish here; almost every street eatery makes this. Just Pho means standard noodles (wheat), but you could have Bahn Pho (rice noodles) by specifying it. Pho is a combo of noodles, soup and meat. Hanoi locals love their Phos’ with beef, veal, pork or chicken. I tried them all at different joints, pork was okay, but the beef and, especially the chicken Pho proved the best choice. Pho does make your stomach feel stuffed, but only momentarily, but I found it an extremely grease free dish to have.

It’s getting dark here and the city at night keeps getting better. The night is when most people venture out for their drinks. There are many bars around, but as the street food, the drinking too happens on the street here. During weekends lots of people come out on the streets, drink early and leave; only to be replaced by a new set of the crowd. While often some small music bands pop up to play for the crowd.

The constant source of gratification is the food, as I said before, most dishes revolve around noodles and rice. I order noodles which they give you with stir fry veggies and beef. Solid! The night’s still young, and I venture out to a corner where many stalls were serving beer. 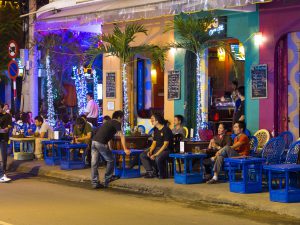 Taking up a seat, I was warned by a fellow tourist ‘If you want to pee, hold on to it or you can forget your seat when you come back’. This I figured long ago, looking at the amount people around. Hanoi has a curfew, so bars shut shop by 1 – 1.30 AM, but some bars take you in and switch the lights off pretending as if they are closed.

The nightlife is vivid and energetic, with people and their love for the street keeps the atmosphere buzzing. If the streets are not your forte for an experience like this, then you could always hit one of those underground music bars; Hanoi Social and Barbetta are some of my recommendations. They are filled with expats and locals, who indulge in some good new music with a chilled out atmosphere, but this scene is in total contrast to the streets.

I noticed some people inflating balloons on their drinking tables and sucking the air back. Then I realised that most people were doing it, thus increasing my curiosity towards it. I tried one, and a few minutes later, everything felt dizzy, and the whole place was spinning. Soon I was laughing uncontrollably with some people. Can you guess what it was? It turns out the locals indulge in mild doses of laughing gas. I know it sounds dangerous but was totally worth it.

My appetite rose with the sun. Thanks to the people and their enterprising nature, everything starts pretty early around Hanoi. I expressed my desire to have Bun Cha (Rice noodles with pork dipped in sauce). My local guy suggested the place he took me served the best Bun Cha around the area, and indeed it was. The noodle was perfectly cooked, so was the pork mixed in a sauce, calling it anything other than delicious would be a crime.

Afterwards, the same local guy asked me if I’d like to try something other than the usual meat. I said yes, and we went on a walk to a street stall selling… erm, worms! Worms? These worms are seasonal, September is when they are available, but the vendors buy enough to last a year and preserve it by freezing it. The worms are cooked with other meat and come in what looks like a rice cake.

I checked online for what worms these were, but if you want to explore this delicacy, do not look at the images on google or wherever. Worms were followed by snails. You break the shells they come in, pick them with a small pointed object they provide to dip it in the sauce and put them into your mouth. They are wet, smooth and give a wobbly sensation, but are ace!

The cruelty of time

I was satisfied with the things I could explore in one and a half day in Hanoi, but trust me it’s not enough. There are more food items here than I can imagine. I would be back again to savour the rest, but for now, it’s time to go.

The streets of Hanoi are chaotic yet textured, it is where a remarkable food culture flourishes, with varieties of different flavors, herbs and combinations you’d have unheard of before, yet it’s so simplistic! With a possible language barrier, you are on your own, to get around and do things, but this is where you learn those things and understand the inexplicable feeling that you are indeed travelling. Here people struggle and want to make their mark in the world. People have an appetite for showcasing their creativity, history and a glimpse of a perspective future. Despite all the modern advancement, the city and its population have set one foot in tradition. Hanoi is not just a city; it’s a quintessential Southeast Asian experience.