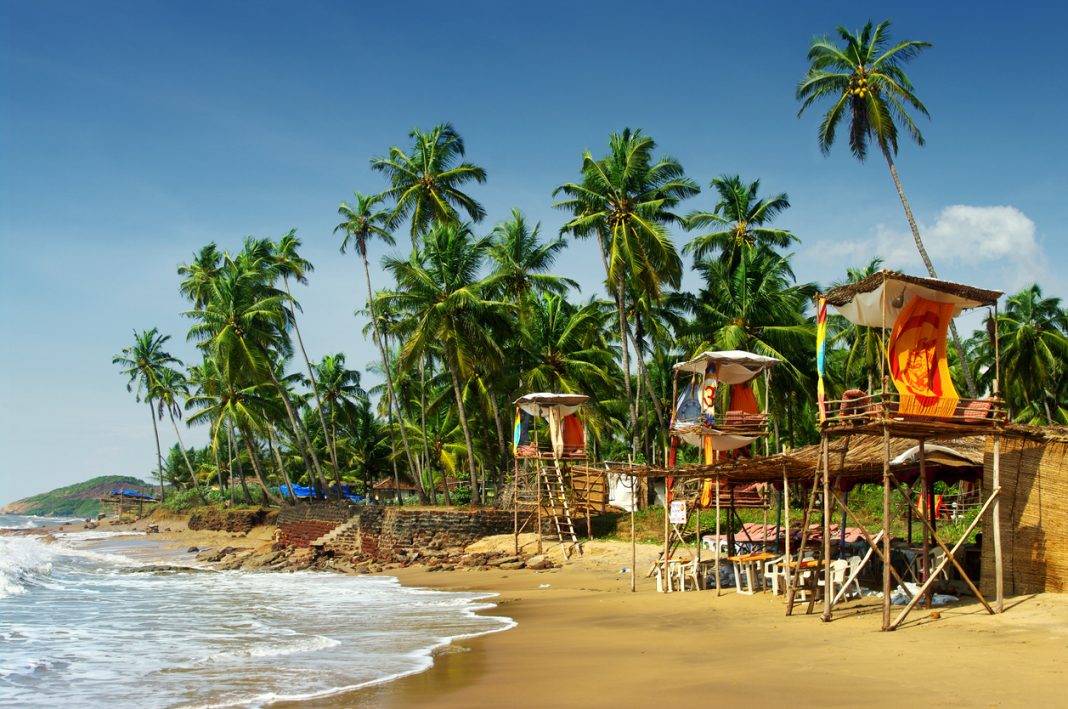 Situated on the west coast of India, the small state of Goa is most famous for its stunning beaches. Once a Portuguese colony, it has a unique mix of cultures. There are loads of smaller, charming towns and villages to explore too, as you’ll soon see in this Goa travel guide.

Also known for its many flea markets, its unique and delicious food, Goa boasts a vibrant nightlife and exciting adventure opportunities. Panaji (or Panjim) is the state capital and is a wonderful mix of the old and the new, while the surrounding beaches offer a gamut of watersports.

Also read: North Vs South Goa – which one is the best for you?

What This Article Will Cover

So, let’s take a look at everything that this wonderful state has to offer, from beaches and natural diversity to equally iconic churches, monuments, and museums. And, if you’re planning to go on a Goa trip yourself, there’s also basic logistical information such as transportation and seasonal sights.

Here’s Our Goa Travel Guide Of Everything You Should Know

How To Reach Goa

Goa is very well connected to all the other Indian states. Here is how you can get there.

Goa’s only airport is Dabolim in the town of Vasco da Gama (around 30 km from Panaji). It has lots of regular domestic flights, but only a handful of international flights. Many foreign tourists arrive via Mumbai or Bangalore, both of which have multiple connections to Goa.

Goa is well linked to the Indian Railways. The largest station is at Madgaon in South Goa, though there are also smaller stations at Pernem, Thivim, and Canacona. The Konkan Railway connects Goa to both Mumbai in the north and Mangalore in the south.

Goa has a well-connected network of roads, and many buses (both private and state-run) run daily from major cities like Mumbai, Bangalore, and Pune. You can also drive to Goa from these destinations (600 km from Mumbai, and about 605 km from Bangalore)

How To Get Around In Goa

Though there are no internal flights, there are many other ways to get around on your Goa trip. 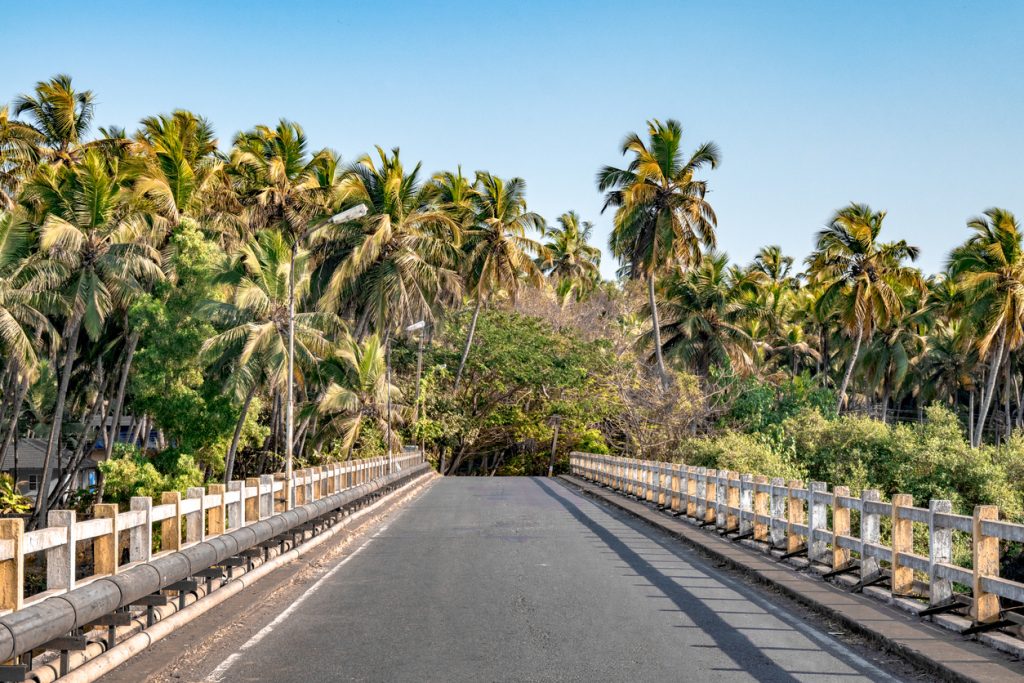 Whether you use public transport or rent a vehicle, this is the best way to get around Goa. And though the roads have a sprinkling of potholes and hairpin bends, they are generally in good repair.

Bus: There’s an extensive network of buses that shuttle to and from almost every tiny town and village, and usually have the destination posted in the front window. The main hubs are Panaji, Margao and Mapusa.

Autorickshaw: An autorickshaw is the better option for short trips, and you can usually hail one in most towns; just remember to negotiate the fare before you jump in.

Taxis: Also widely available are taxis, which can even be rented by the day. Groups of women and families can also try the Women’s Taxi Service, with female drivers and metered vehicles. Though ridesharing services such as Uber and Ola are banned in Goa, the new Goa Miles initiative allows you to book taxis via an app.

Car: You can hire a car (with a driver) to get around Goa either at rental stations or online at sites such as Urban Drive.

Motorbike: This is the most popular form of transportation in Goa, and is very easy to rent online, from companies, or even from your hotel/guesthouse. But, with both cars and bikes, always remember to have a driving permit, and to follow the road rules.

Bicycle: They are a convenient and eco-friendly way of getting around, and can be either hired or picked up second-hand (for longer trips).

There are local vehicle/passenger ferries that cross a number of creeks and rivers in Goa, connecting places like Panaji and Betim, or Ribandar to Chorao Island; they usually run between 7 am to 10 pm.

Though well linked externally, Goa’s internal railway network isn’t particularly useful for getting around unless you’re travelling the length of the state in one trip (such as from Arambol or Mapusa to Palolem). However, you can use the South Central Railway which runs east from Vasco da Gama, for day trips to Dudhsagar Falls via Colem station.

Goa enjoys pleasant weather throughout the year, as it lies on the coast. However, summers (April to June) can get quite hot and humid. Monsoon sees bad weather along the coast, and there are far fewer crowds. The best time to visit Goa is from November to February when the weather is pleasant and dry, and the sea is calm.

Also Read: How to Spend Smarter and Save Better in Goa

Here Are Some Of The Top Places To See In Goa

There are lots of wonderful places to see in Goa, both cultural and natural. From whitewashed churches and crumbling forts to glittering beaches and tropical forests, here are some of the best places to visit in Goa.

Natural Places To See In Goa That You Cannot Miss

Read More: 9 natural attractions in Goa you absolutely should not miss

Man-Made Things To See In Goa That Are Just AMAZING

Local Culture In Goa For You To Explore

Goa is famous for its lively beach parties and is full of all kinds of clubs. However, there is so much more than this. Its abundant natural beauty gives you the opportunity to go on river cruises, birdwatching and guided hikes, while the more spiritual can opt for yoga and meditation workshops. Those interested in history and culture will find lots of fascinating churches, forts and museums to explore as well.

Celebrations And Festivals In Goa You Can Experience

Christmas is a big event in Goa, and there’s an atmosphere of festivity in the air throughout the last few weeks of December. Shops and houses are decorated, and there are special evenings and great food at all the restaurants. Another festival that is celebrated in a major way is Ganesh Chaturti in September where idols are placed in households and various public places, where offerings and prayers continue for ten days.

However, one of the most unique festivals is the four-day Carnival that is held in mid-February, just before Lent, featuring lively processions, floats, and dancing.

Read More: The Festivals And Events In Goa You MUST Attend In 2020

Unique Things About Goa To Find Out For Yourself

Apart from its parties and nightlife, Goa is also known for its unique and iconic food. Goan cuisine is a delicious blend of Portuguese and Indian flavours. It is full of meat and fish dishes such as vindalho (a spicy curry), xacuti (red coconut-based sauce), cafreal (coriander and green chilli based curry), and chouriços (pork sausages cured with salt, spices and vinegar). There are also wonderful desserts like bebinca (a layered coconut cake) and dodol (coconut fudge).

Read More: Delicious Goan Food That You Have To Try

How Can You Travel Better?

Though Goa is a relatively small state, it is immensely popular with tourists – both domestic and foreign. With such large crowds, it is very important that anyone who visits respects the local people, their culture, and the natural ecosystem. Don’t take pictures of locals without asking them, don’t litter on beaches and other natural spots, and don’t feed the animals in national parks. Remembering these things can help your trip be more worthwhile and meaningful, and of course memorable.

So, Is Goa The Place For You?

Goa has something for every kind of traveller. Whether you love parties and the beach, or hiking and museums, you’ll be sure to find something for you to do in this wonderful Indian state. Goa’s liberal reputation is also a draw for LGBTQ travellers (although as with most places in India, public displays of affection aren’t encouraged).