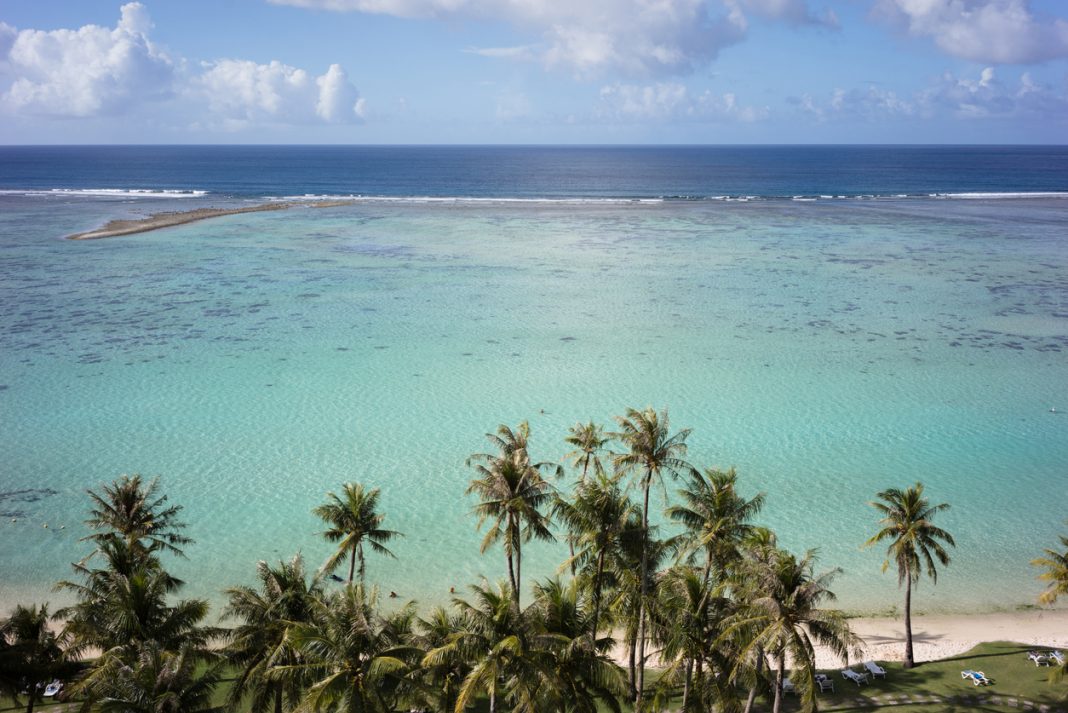 Located in the western Pacific Ocean, Guam island is an enchanting blend of native Chamorro, Spanish and American influences. This tropical island is Micronesia’s largest island, and an American overseas territory. Guam island is the southernmost island in the Mariana Islands archipelago and is also a US military base. Primarily, the military bases are located in the northern part of the island. Guam is 48 kilometres long, 14.5 kilometres wide, and is best known for its stunning coastline, picturesque harbour, enthralling Chamorro culture, and historical sites stemming from both Spanish colonisation and World War II. The capital of Guam is Hagåtña (formerly Agana or Agaña) and is the seat of government in the island. Guam’s population is diverse including Japanese, Chinese, and incomers from other Pacific islands, along with the indigenous Chamorros. These are natives of the island and are of Malayo-Indonesian descent with a considerable mix of Spanish, Filipino, Mexican and other European and Asian ancestries.

Visit this jewel of the Mariana Islands that offers peaceful white-sand beaches with clear blue oceans and even bluer sky. You’ll find the island bears well-preserved traces of many different cultures as you’ll learn about Guam’s fascinating World War II heritage and the local Chamorro culture. Guam island’s temperature ranges between 75-85 degrees Fahrenheit with a humidity level of 60-80 per cent throughout the year. It is recommended you visit the island during the dry season, between December and June.

How To Travel To Guam Island?

You can reach Guam by plane via Won Pat Guam International Airport. It is the only civilian gateway to/from the island, and is located only a few kilometres inland of Tumon, a district located along the northwest coast of Guam.

There is no regular ferry service from Guam Island. However, cruise ships do stop in Guam’s principal port, Apra Harbour, on various itineraries, generally as part of a Pacific crossing or during circumnavigating around the world.

How To Commute Within The Island?

While taxis are readily available at all hotels and major shopping centres, you can also explore Guam island by bus, charter boat or a rented car. Do remember, however, that an International Driving Permit or a US licence is required if you are driving around the island. Mass transit service is provided by the Guam Mass Transit Authority (GMTA). Buses operate on nine selected routes, connecting nearly all of the villages on Guam, but their frequency is very unpredictable.

Other than the central business districts of Hagåtña and Tumon, it is not safe to walk around Guam island. That is mainly due to heat, distance, dangerous vehicular traffic, lack of signage and the lack of sidewalks.

Natural Things To Experience On The Island

1. Ypao Beach Park: This bayside park is extremely popular for picnics as it is groomed and manicured regularly. It features access to a fine sand beach with the same name and  coral-filled waters.

2. Ritidian Point: It is the northernmost point in Guam island which is also a national wildlife refuge (Guam National Wildlife Refuge) and the site of one of Guam’s most pristine sandy beaches.

4. Gun Beach: Another popular beach of Guam is Gun Beach. It is a secluded cove at the far end of Tumon Bay and offers good snorkelling, a dive site with steep reef sides and a cable trench leading into deep water. You must have protective beach shoes for the beach.

5. Alupat island: Enjoy this small, uninhabited, densely forested island that sits just a short distance offshore and allows you to take some time off the crowded hotspots of Guam.

6. Pagat Cave: The hike to Pagat Cave is not very long, just over a mile, but it is fairly steep in places and drops down 400 feet in elevation. You will be rewarded with a swim in a pool of pure, freshwater at the end of a narrow passage in the cave. The pool is completely enclosed in the darkness so carry your flashlight.

7. Two Lovers Point: A breathtaking lookout at the northern tip of Tumon Bay where you can enjoy stunning views of the east and west coasts of the Guam island.

8. Piti Bomb Holes Reserve: Explore the caverns and coral reefs of this reserve and get acquainted with native sea life.

Man-made Things To Experience On The Island

1. Pacific National Historical Park: The park is known for its historical resources such as former battlefields, gun emplacements, trenches, and historic structures all serving as silent reminders of the bloody battles of World War II that took place on Guam.

3. Guam Atlantis Submarine: Explore the underwater beauty of Guam through this submarine ride that goes as deep as 40 feet. You can see a variety of fish and coral reefs developed over 18,000 years ago.

4. St Laguna Wedding Chapel: Also known as the Rainbow Chapel, St Laguna is surrounded by immeasurable blue sky and coastline. The chapel’s rainbow glass and white interior design provides the most romantic atmosphere for a wedding.

7. Lina’La Chamorro Beach and Culture Park: Visit this small botanical park which is set on a village site that dates back a thousand years. It aims to show visitors what life was like on Guam 500 years ago when the Chamorro had the island to themselves.

8. Hågatña: Go on a 4-kilometre walking tour around the capital city and stop by 17 historic sites. Via this historic walking path, you find relics from Guam’s European influence, such as Plaza de España and Dulce Nombre de Maria Cathedral-Basilica.

9. Pacific War Museum: This is where you can learn more about Guam’s key role in World War II history.

Cultural Things To Experience On The Island

2. Tumon: This district in Guam island offers everything from upscale hotels, boutique shopping to a waterfront strip of bars and clubs.

3. Dededo: Visit the second largest and most populous village in Guam that is home to the Micronesia Mall, the largest shopping mall in Micronesia.

4. Mangilao Night Market: This Thursday night market at the Santa Teresita Church in Mangilao is more of a community-oriented night market which offers generally cheaper prices and a greater selection of local food.

Seasonal Things To Experience On The Island

1. Malesso’ Gupot Chamoru/Crab Festival: Visit Guam in the month of March and check out the prized local land crabs at this annual festival at Guam’s southernmost village of Merizo.

2. Mango Festival: An annual affair held in Agat, a southern seaside village, the Mango Festival attracts both residents and visitors with dance performances, vendor booths and concession stands, mango displays, contests, demonstrations, live music, rides, games and more. It usually takes place during the last weekend of May and is a three-day long festival.

3. Donne Festival: Every year in September the Donne’ Festival is held in the village of Mangilao to celebrate the red-hot local pepper—donne. A staple ingredient in Chamorro cuisine, this pepper is celebrated at this festival. You will get to see cooking competitions which are held to determine who can stand the most heat, and who makes the best kadun pika (spicy chicken stew), dinanche (hot pepper paste) and chilli.

4. Banana Festival: In April, the village of Talofofo shines, as it shows off its signature fruit during the annual Banana Festival. It is held at Ipan Beach Park and offers you culinary delights such as fried bananas, stewed bananas and even banana chips.

5. Agana Heights Coconut Festival: Another March event, this annual festival is a charming weekend celebration that is devoted to all things coconut. You’ll find artisans and vendors selling a variety of handmade gifts and products such as coconut oil, soaps, wooden carvings and toys.

Unique Things To Experience On The Island

2. Dolphin spotting: The waters surrounding the island of Guam are home to an immense diversity of sea life, including dolphins. These sea creatures inhabit warm waters, so the island is an excellent place to marvel at these curious creatures in their natural habitat. The best part is that there are dolphins all year round!

3. Diving Sites: Diving in Guam is cheaper and more accessible than other places in Micronesia. Other than exploring WWI and WWII shipwrecks you can also dive to see corals and spot some large fish. There are around 150 dive sites in Guam.

4. Latte Adventure Park: Plan a great cultural experience at this adventure park which combines nature, local wildlife, ancient Chamorro history, and traditional practices that is suitable for guests of all ages.

5. Deep Sea Fishing: Organise the trip through many different tour guides and spend the day fishing for exotic fish in Guam island.

How To Travel Better In Guam

Respecting age, Guam still retains its culture. While the atmosphere here is relaxed and friendly, especially around beach areas, topless sunbathing by women is not encouraged in Guam. Do remember that most beaches are free but are also family orientated. As the island is filled with coral reefs as well, it’s best to NOT disturb marine life while exploring the deep sea. When you are dolphin spotting, do remember that the creatures might not be shy but swimming with them is forbidden and they are protected.

Whether you are planning a romantic escape or even a family-style holiday, Guam will welcome you with its relaxing warm tropical sun and exciting water sports. Shopaholics will be pleased to know that Guam is a duty-free paradise and one of the best destinations to try out scuba diving, snorkelling and an adrenaline-pumping jungle tour. Guam is heaven for history enthusiasts as you’ll get to unravel 4,000 years of intriguing history—ranging from pre-colonial culture and archaeological sites and the site where Magellan’s ships landed, to Spanish forts and WWII battle sites. Guam is much more than its sandy beaches, waterfalls, coconut trees, and coral reefs, all waiting for you to explore. Visit this island and tell us all about your experiences in the comments.