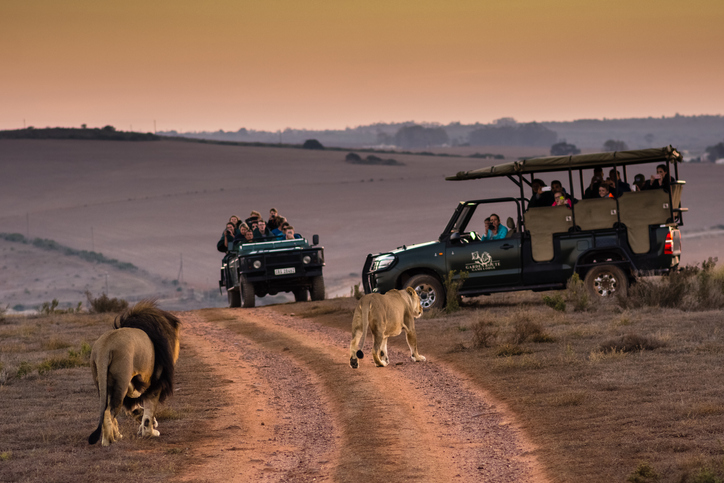 So, you have followed my step by step advice on how to successfully go on a safari holiday for less than £1,000, and now you are thinking “Hmmm… she mentioned a self-drive safari but she also mentioned a guided safari and I’m terribly confused about the two”.

Read More: Here’s How I Travelled To South Africa For A Safari Under £1000

Chill out amigos, the difference is simple; one of them you drive yourself, and with the other, you kick back and let an experienced guide take the wheel. Although the self-drive is cheaper, I have a few good reasons why I recommend you let a guide take you around before you embark on this yourself.

Reason Number One: The Guides Know Everything

To be a guide in a safari park you have to know your stuff. In fact, while we were on the guided safari, we asked what the training process was like and it is crazy. The amount of stuff they have to know – from the types of soil to the gestation period of each animal, to the constellations (that’s right, the stars!) of that particular area  – it’s enough to fill an entire library.

You have a living, breathing, talking, library driving you around and telling you seriously cool stuff about wild African animals. So, it really goes without saying, that THIS is the opportunity for asking questions. They will know stuff even google won’t know, because they spend so much time in the park and have begun to know the animals quite well, which brings me onto my next point…

There are two sub-reasons that explain this big reason. First of all, in a jeep you are up a lot higher than most other vehicles and the seating is arranged in tiered benches, so no one is ever going to be in your way, and you can see animals over trees and through long grass – great for photographers. Secondly, the guides spend so much time in the areas that the animals live in, they get used to their movements and can often guess where they are going to be.

Of course, they are wild animals in their habitat, and it is never a guarantee that you are going to see anything and everything, but you are far more likely to see something the first time ona a guided safari than going by yourself. On our game drive, we had been in the park not even five minutes before we saw a pride of lions feeding, and that was because our guide had been there the evening before and had seen them take down their prey! See, it’s not what you know…

Reason Number Three: You Learn How to Be Safe

How did my boyfriend and I feel confident enough to drive close to wild animals on our own? Well, we asked the guide all about driving safely in the game park, and we also followed his example with quite a few things. These were things which included not leaning too far out of the car window. That may sound like common sense, but what we didn’t realise is that the animals see the silhouette of the vehicle as a part of the scenery, and in fact don’t associate it with the threat of humans.

So, if you were to lean out of the car window, you may give them a massive fright, which can cause some animals to be dangerous. Another interesting one was to always turn your engine off if you are in the path of elephants because the engine noise disrupts the low vibrations the elephants make to communicate with each other. If there is a break in that communication, the elephants will ‘deal’ with whatever is blocking it (they will squish your car like a tiny bug). These very important nuggets of information wouldn’t have been passed onto us, had we not been on the guided tour first.

Reason Number Four: You Can Relax

You are not the designated driver my friend, leave the looking at road signs to the guide, you’re on holiday and you are there to enjoy the scenery and take beautiful pictures of cute lion cubs and baby zebras. You only have to focus on one thing, sitting there quietly and letting Africa do its thing (it will wow you). Take in the sun, listen to all the sounds of the animals chattering to each other, let the guide amaze you with crazy facts about warthogs, and just ENJOY IT.

Now that I have convinced you that a guided safari is a good idea, going ahead and booking it is very easy. You can do this through your accommodation if you have booked that, or you can go through the National Park’s main website, this depends on which national park you are going to, but for South Africa it is SANParks. Easy peasy.

Did I mention that there is food provided too? And drinkies. Many drinkies. Have fun!