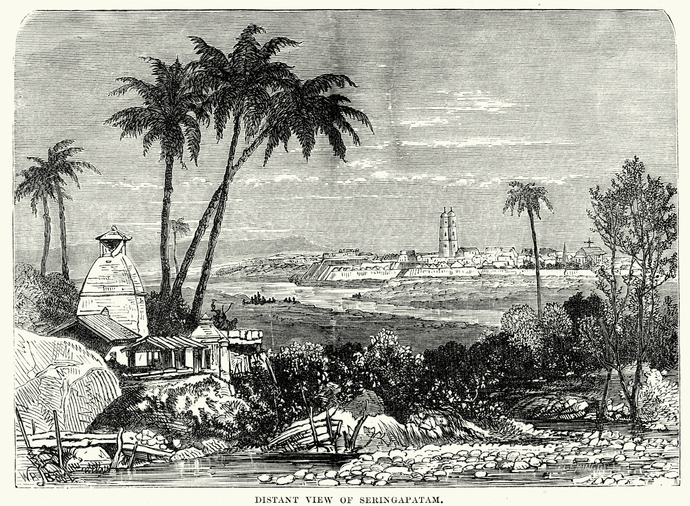 In the late 18th century, the island city of Srirangapatna was one of the largest cities in the world. Tipu Sultan’s capital was once considered the wealthiest and most beautiful spot in this part of the world. Just 15 kilometres from Mysore lies a rocky island formed by the river Kaveri; this island is called Srirangapatna. The island provided natural protection from military attacks. So over the centuries, the island saw several different rulers from different dynasties. The island town, which is also known as Seringapatam, was the scene of several political changes.

Also Read: 10 fascinating things to see and do in Srirangapatna

The Sri Ranganatha temple in the town is of great religious significance. It is one of the most important pilgrimage centres in south India for Vaishnavites (those that worship Vishnu). According to tradition, all islands formed by the river Kaveri are consecrated to Ranganatha Swamy. Sri Ranganatha Swamy is considered to be an avatar of the Hindu god Vishnu.

The confluence of three holy rivers, the Kaveri, Kabini and Hemavati, forms the island. This area is called paschima vahini and Hindus perform obsequies to their ancestors and immerse the ashes of the departed in the sangama (confluence of the three rivers).

The Rulers Of Srirangapatna

Also Read: A guide to Mysore Wadiyars: The royals of the imperial city of Mysore

In 1760, Hyder Ali, a dalwai (commander-in-chief of the army) wrested power from the Wadiyars of Mysore. He made Srirangapatna the capital of the kingdom and the island fortress was once again the seat of power. After his death, his son Tipu Sultan became the king of the Mysore kingdom. He put an end to his father’s charade of deference to the Mysore Wadiyars and proclaimed Mysore sarkar-e-khudadad (God-given rule). He proclaimed himself king of this kingdom.

Also Read: Visit the palaces of Tipu Sultan, the Tiger of Mysore

He expanded his kingdom aggressively and waged wars against the British, the Kodavas, the Malabar Rajas and Malabar Catholics. Entire communities of people (Nairs, Kodavas and Mangalore Catholics) were rounded up from conquered regions and deported to Srirangapatna. But his never-ending rivalry with the British spelt doom for his kingdom. The kingdom of Mysore went to war against the British army several times between 1766 and 1799.

The Treaty Of Seringapatam

The Treaty of Seringapatam (Srirangapatna) was signed on 18th March 1792. This ended the Third Anglo-Mysore wars. The Srirangapatna treaty was signed by Tipu Sultan, Lord Cornwallis and representatives of the Nizam of Hyderabad and the Maratha Empire. Tipu Sultan ended up relinquishing almost half of his kingdom to the allied forces of the East India Company.

The Fall Of Tipu Sultan And British Rule

The Fourth Anglo-Mysore war, also known as The Battle of Seringapatam, spelt the end of Tipu’s rule. After a long siege, Tipu was killed in the battle and the British army took over the Srirangapatna fort in 1799. The British army reinstalled the Wadiyars of Mysore as the rulers of the Mysore Kingdom. The city of Mysore was re-established as the capital. The British army used the Srirangapatna fort as a garrison for a while before shifting to Bangalore. This was the last time Srirangapatna would be the scene of political change. Tipu’s beloved capital, that he gave his life for, became a heritage site and a tourist destination.

The History Of Srirangapatna Is Multifaceted

The history of Srirangapatna, the island town is fascinating, layered and multi-faceted. Rev E.W. Thompson, a British chronicler wrote, “Seringapatam has a history which only the years of labour can unravel.”  The beautiful town has it all, culture, history, religion, legends and myths. Each of the rulers of the island town has left an indelible mark.

But the grandeur and splendour that the town enjoyed in its heydays are long gone. According to Francis Buchanan, a Scottish surveyor, the town was one of the largest cities in the world at the time. It was populated by at least 150,000 people in 1800, just after the fall of Tipu Sultan. Today, the sleepy heritage town in Mandya district, Karnataka has only around 25,000 people living in it. Tipu’s forgotten capital and its monuments are the only remnants of that time. They stand proudly in the baking, hot sun and show visitors a bit of the island town’s earlier splendour.