Where Legends Are Made | Greece, Part 1

Travelling from Igoumentisa to Athens was a terrific experience. We visited historical sites and encountered epic scenery en route. We drove through the mountains of Arcadia (humming Demis Roussous’s Lovely Lady of Arcadia), with sweeping views of the Ionian Sea. Beautiful olive groves, lovely yellow blossoms and trees groaning with the weight of many oranges and lemons. It was just breathtaking. We heard the story of Pan, the Greek God with the hind legs and horns of a goat – he was the God of the wild, of shepherds and flocks, of nature in the mountain wilds, of hunting and rustic music, and also the companion of nymphs. 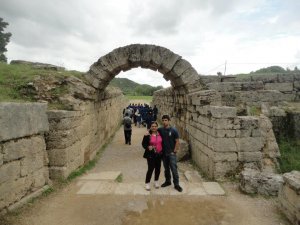 Our first stop was the site of Olympia, situated in the valley of Peloponnesus. Olympia is famed for being the centre for worshipping Zeus in the 10th Century. In addition to temples, there are remains of all the sports structures erected for the Olympic Games, which were held in Olympia every four years beginning in 776 B.C. Mostly in ruins, every rock has a story.

Then we came to the Altis, meaning the sanctuary to the gods. The Altis includes ruins of the Temples of Hera and Zeus from the 6th and 5th centuries, respectively. East of the Altis lies the stadium (a rectangular field not circular like the modern day one) where the Olympic Games were held. South of the stadium is the Hippodrome, a group of mansions and baths, including the famous House of Nero. The Olympic flame of the modern-day games is lit by the reflection of sunlight via a parabolic mirror in front of the Temple of Hera and then transported by a torch to the place where the games are held.

Since there were so many kids on the bus, we thought it would be fun to run the same race run by the first Olympians. So they lined up at the start and ran 100 metres to the finish line. It was nothing short of awesome. I was the Umpire so I didn’t have to run (not that I could have even if I tried)!

In the olden days, a competitor had to be a free Greek who had trained for the games in his home for ten months, and for one month in Olympia. There was no cash prize for the winners but they received great honour. The prize was an olive wreath from none other than the great God Zeus’ own holy tree. In addition to this, the winner usually received free meals for the rest of his life in his hometown. If an athlete was caught cheating, bribing or poisoning, he was forced to finance a statue – a tablet below would give details of him and his family and they would forever be shamed. 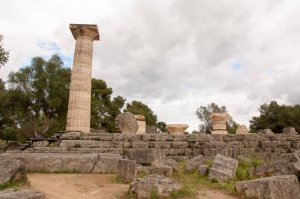 We stayed overnight in a hotel perched in the mountains overlooking Olympia. Amazing food on offer and it felt good after a long day of bus travel and walking around.

Next day saw us piling in the bus to go to Athens. We stopped at Epidavrus – the most famous healing centre of the ancient world. People used to go there to find a cure for their ailments. Legend has it that they all slept in a big hall and the Gods would appear in their dreams and give them a cure. There are many mineral springs around as well which may have been used for therapy. The theatre there has exceptional acoustics. Even if you stand at the bottom and whisper, people at the very top step of the amphitheatre can hear you clearly. No sound system required! The rows of limestone seats filter out low-frequency sounds, such as the murmur of the crowd and amplify high-frequency sounds from the stage. Spectacular is putting it mildly. 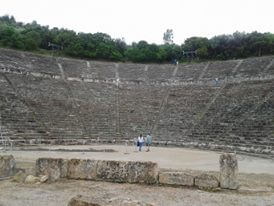 We chugged on then to Nafplio – a picturesque seaside town and tucked into yummy Greek cuisine. Honestly, the flavours from the cheese, tomato and herbs just burst in your mouth and linger on until you wash it down with wine (but of course). From there it was onto the Rio-Antirio – the world’s longest multi span cable stayed bridge. This bridge is famed because it connects Rio on the Peloponnese to Antirio on Mainland Greece. It is 1.8 miles long. Quite a work of architecture.

An hour away from Athens we stopped to see the amazing Canal of Corinth. It is indeed a marvel tends to take your breath away. It connects the Gulf of Corinth with the Saronic Gulf in the Aegean Sea. It cuts through the narrow 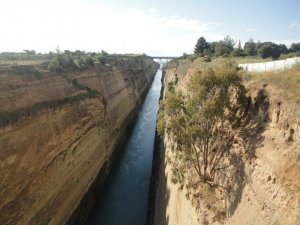 Ishtmus of Corinth and separates the Peloponnese from the Greek mainland. Amazingly, the builders dug the canal through the Isthmus at sea level itself, so no locks are used. It is 6.4 kilometres (4.0 mi) in length and only 21.4 metres (70 ft) wide at the base. I stood precariously on the bridge which is about 45 metres above the canal, gingerly stuck my camera through the bars and took some fantastic pictures! My fear of heights then kicked in and I retreated to the souvenir shop to buy my fridge magnets!

We reached Athens late evening. You can read more about my sojourn there in this article. As the Greeks say, Addio, till we meet again.

*All photos except for the featured image belong to author Mavis Smith.