You can read about my first encounter with Athens, Greece here. Following that, with a sense of great excitement, we moved on to the our first stop of the day – to see the statue of Leonidas, the great warrior king of Sparta. He is remembered for his heroic stance in the 2nd Persian War. He died in the Battle of Thermopylae in 480 BC and 300 brave Spartans died with him. See the movie 300 to know all.

We arrived in Meteora late evening and checked into a hotel with an awesome view of the famed monasteries of the Greek Orthodox Church. Meteora literally means “middle of the sky”. Built on natural sandstone pillars at the Plains of Thesally near the Pineios River and the Pindus mountains. Legend has it that in the 9th century, an ascetic group of hermits moved up to the ancient pinnacles. They were the first people to inhabit Metéora. They lived in caves and fissures in the rock towers, some of which tower 1800 ft (550m) above the plains. This great height, combined with the sheerness of the cliff walls, kept away all but the most determined visitors. During those days the hermits opted to lead a life of solitude and met only during special days and Sundays for worship and prayer. We went for midnight Easter service to a nearby Church – very different and very nice. Open air and very festive, it made us feel good seeing we were so far from home. They apparently make some excellent famed wine which sells real fast and is difficult to get a hold of. 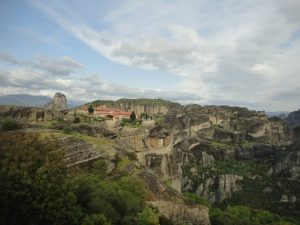 Athens invokes a picture of the Parthenon temple atop the Acropolis. Towering over the city, it is a reminder of the glory of ancient Athens. It has Doric columns with superb and intricate details. On the Eastern side, the reliefs depict the birth of Goddess Athena. The Erechtheion has the Porch of Caryatids – there are 6 statues of maidens instead of the Doric columns. You can see the Amphitheatre below from the top. There was a lot of renovation work going on so I had trouble getting a clear good picture. If you head to the North wall, you can see Agora which was the marketplace in ancient days.

The Church of the Holy Apostles is in Agora. It is built on a sacred spring or a nymphaion. The walls have religious paintings and icons with frescoes of Christ, John the Baptist, arch angels and cherubims.

The museum at the bottom of the hill is great and there are some quaint shops around. All very expensive considering it’s a prime tourist area. Museums you must visit are the Byzantium Museum, National Museum of Archaeology, and Museum of Cycladic Art. 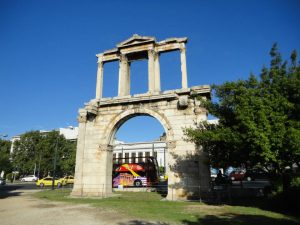 Hadrian’s Arch was built to welcome the Roman Emperor Hadrian to Athens in 132 AD. There are two inscriptions on either side of the Arch which name Theseus and Hadrian as founders of Athens. Built with Pentelic marble, they did not use cement or mortar.

We set off to do some shopping. In the narrow lanes of Plaka you find many treasures. Good olives, olive oil, herbs, various marinades, fridge magnets (of course), clothes, sandals and the like. A bit homesick, we had Indian food and did full justice to the buffet! Happens sometimes! There are numerous authentic Greek restaurants with sit out terraces. Anafiotika in the neighborhood is great for Greek food. The streets are nice to wander around in. The shopkeepers tend to get a bit aggressive if you don’t buy their wares, so be careful. 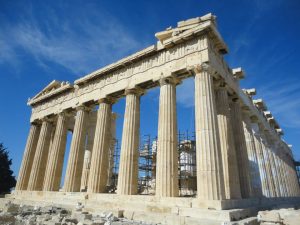 The Panathenaic stadium is a must visit. It seats 60,000 spectators and was constructed in 335 BC under the reign of Herodes Atticus. The stadium was renovated in 140 AD with 47 tiers of new marble seats. What we see now is a replica of the original stadium which was rebuilt for the 1896 Olympic games.

Overall Greece is full of history and has so much to offer. The legends and myths are intriguing to say the least. It took me back to my school days and my History teacher telling us about Greek mythology. So many words we use have their origins in Greek words. Most medical terms originated from Greek words. I saw the movie My Big Fat Greek Wedding for the 100th time when I returned home. Appreciated and enjoyed it far more than I did the first time I saw it. The Greeks are hospitable and very warm. Loud would be an understatement – they talk loudly, gesticulate wildly but are oh so much fun!

*All photos except for the featured image belong to author Mavis Smith.