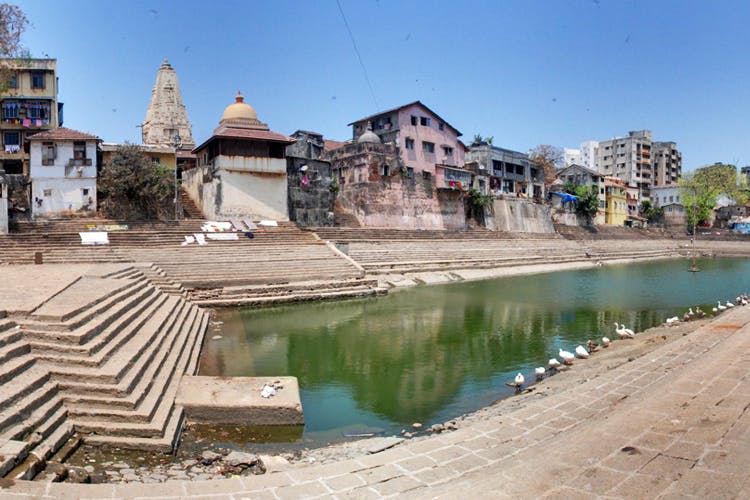 At the northern end of Back Bay Tucked away on the tip of Mumbai’s exclusive Malabar Hill,  is a sacred oasis that very few have heard of, known as Banganga Tank. Time feels like it stands still and it’s a huge contrast to the fast life of Mumbai.  Banganga in Mumbai, has a little piece of history and culture ensconced by a string of high-rise luxury apartments. The tank has its own identity and is not the only stand-alone feature of this place but the Walkeshwar temple here which is dedicated to Lord Shiva attracts tons of devotees every day.

Origin Of The Tank

There is a legend dating back to the Hindu epic, Ramayana, which states that Lord Ram stopped here to seek the blessings of a sage, while on his way to Sri Lanka to save his wife Sita from the evil demon king Ravan. To do so, he created a Shiva Linga from sand, which came to be known as Valuka Ishwar which means an idol made of sand in Sanskrit, lending the temple its name. The spot where Banganga Tank stands today is where Lord Rama shot an arrow into the earth to quench his thirst and as a result of that a fountain of water sprouted underneath the earth. Since the river was created by the piercing of arrow or Ban (in Hindi) it came to be named as Banganga. Today a pole marks the spot where Ram’s arrow pierced the earth.

How The Tank Was Constructed?

Known as the mini-Banaras of Mumbai this freshwater tank, along with the neighbouring Walkeshwar temple, was built in AD 1127 by Lakshman Prabhu who was a Goud Saraswat Brahmin minister in the court of the Silhara dynasty of Thane. Since the site holds immense mythological significance among the Hindus area around Banganga in Mumbai was developed as a pilgrimage place, and numerous temples and Dharamshala came up. the tank was built over the spring, is 135 meters long and is 10 meters deep, and continues to provide a flow of freshwater. The Gaud Saraswat Brahmin Temple Trust today still owns and manages the tank and temple.

Banganga in Mumbai and its vicinity, it surrounded by unique sights, sounds, and aromas that will transport you to a simpler time. The many narrow alleys branching out from the main road and leading to the tank are surrounded by temples and old houses bathed in vibrant hues of, yellow, red, pink, orange, and other colors. The walls on either side are in different stages of disrepair but have a certain alluring quality about them. Colorful murals, depicting scenes from mythology, history, and folklore adorn these walls, making you connect with the heritage of Banganga in Mumbai. The air here is humid and thick and you will catch hints of either incense sticks or aromas of food being cooked in the residential kitchens. Surroundings of the tank are relatively free of crowds except for people who come to perform religious rituals. Sounds of religious chants, aartis the ringing of temple bells, and the quacking of ducks fill the atmosphere. As you sit on the steps and watch the activities unfold in front of you, you find yourself far removed from the realities of this city that never sleeps.

Banganga in Mumbai was declared a Grade-I heritage structure by The Mumbai Heritage Conservation Committee, this means that it’s of national or historical importance and no structural changes are allowed. Redevelopment of many of surrounding buildings and temples is not allowed because they all have a Grade-II A heritage status. Though the tank area is untouched, over of the years there has been haphazard high-rises loom closely in the background, which threatens to engulf the tranquil enclave. The development of Malabar Hill began in the 1960s, but it was not until the Great Fire of Bombay in 1803, that ended up destroying much of the Fort district which is a thickly wooded jungle, that the area got populated. The devastating fire forced the British to expand the city out from its centre and drove residents to build houses around Malabar Hill.

A rectangular pool structure surrounded by steps on all four sides Banganga in Mumbai is steeped in mythological significance and has an air that will transport you back in time. With Walkeshwar temple adjacent to it the complex houses ‘Shri Kashi Math’ and ”Shri Kaivalya’ or ‘Kawle Math’ in its banks and also has the ‘samadhis’ of the past heads of the Math. Nearby other destinations Jain temple, the Hanging Gardens, Kamala Nehru Park, and Priyadarshini Park also attract visitors. The Banganga Tank is known for holding the two-day Banganga Music and cultural festival, which is conducted annually, in February, by the Maharashtra Tourism Development Corporation. During this time, the tank is cleaned and decorated and the festival aims at promoting Hindustani music and if you visit you can witness the musical performances by professionals as well as amateurs