More
Home Topics of Interest Adventure Travel Have You Been To The Six Marine National Parks Of India? 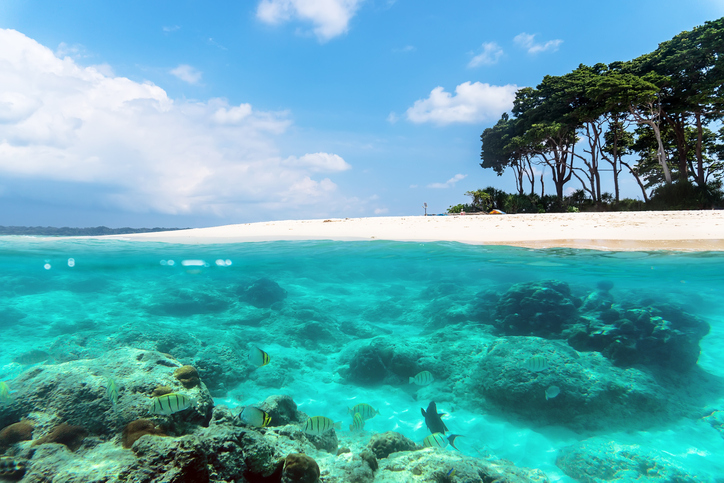 A marine park is a type of MPA (Marine Protected Area) which can be a protected body of water such as a sea or a lake area set aside to preserve a specific habitat and ensure a sustainable ecosystem for all the organisms that exist within it. According to ‘National Geographic’, marine parks are multi-purpose MPAs, which means they have different zones allowing different types of activities. These parks can allow recreational activities such as boating, snorkelling, and sport fishing. Most of them also include zones for commercial fishing that are sometimes called open zones. Lastly, there are also no-take zones, which prohibit any form of extractive activities, such as fishing, mining, and drilling.

The Marine National Parks In India

Situated 29 kilometres from Port Blair, Mahatma Gandhi Marine National Park stretches over an area of 281.5 square kilometres. It comprises 15 rocky islands with white sandy beaches and tropical vegetation, open seas and smaller bodies of water that are home to rare corals and diverse underwater marine life. Established in 1983, the park is also known as Wandoor National Park. Jolly Buoy and Red Skin islands are the most famous of the 15 islands in this national park and are open to tourists. The park is an important breeding ground for turtles and is also open for eco-tourism. This national park is covered with tropical forest and is also home to more than 270 species of birds, including white-bellied sea eagles, parakeet and Andaman teal. Most of the coral reefs in the park are fringing reefs that you can explore while snorkelling, scuba diving and boating here. Keep in mind that the Jolly Buoy and Red Skin islands are uninhabited so make sure to pack some nibbles for yourself.

Also Read: 22 amazing things to do in the Andaman islands

This is India’s first Marine National Park. The park covers an area of 163 square kilometres and is located on the southern shore of the Gulf of Kutch in Jamnagar, Gujarat. Established between 1980 and 1982, this national marine park is distributed in 42 scattered islands in an archipelago. As a credit to its diverse range of flora and fauna, it accounts for a magnanimous natural site home to a diverse range of marine habitats that support 52 species of corals, seven kinds of mangroves, and species of birds such as painted stork, darter and black-necked ibis. This marine park is part of a larger protected marine sanctuary and is also inhabited by colonies of dolphins such as bottlenose dolphins, green sea turtles and the endangered whale shark. Some of the most popular islands in Marine National Park are Poshitra, Pirotan, Karubhar and Narara. Go snorkelling when the tide is low and you can spot giant sea anemone and shrimps, more than 40 species of colourful sponges, sea cucumber, octopuses, pufferfish, jellyfish and a vast variety of crustaceans. If you are renting a boat from Jamnagar to get to the Marine Park, be sure to take the changing tide timings into consideration, based on the season.

A coastal town in Sindhudurg, Maharashtra, Malvan is one of the biologically richest coastal regions in Maharashtra. This town is home to Malvan Marine Sanctuary which was established in 1987. Sprawled over an area of 29.22 square kilometres, this park has a core zone of 3.182 square kilometres and a buffer zone of 25.94 square kilometres. The sanctuary’s core zone includes Padamged island and other submerged rocky structures. The Marine Sanctuary is considered to be the sole marine sanctuary in the Konkan region and is home to the extremely rich coastal species that are unique to the region such as mollusc, pearl oyster, coral, seaweed, mangrove, polychaete and sea anemones. Situated in the southern reaches of Maharashtra, the park is a treat for bird watchers as well. They’ll find a wide variety of egrets, tern, plover and waterfowl that reside here. Explore the area by taking a boat from the jetty in Malvan and you may just spot some playful dolphins that shoot out of these waters. Along with aquatic animals, this sanctuary also includes the tourist favourite of Sindhudurg Fort within its boundaries.

Occupying a total area of 6.23 square kilometres, the Gulf of Mannar Marine National Park is composed of 21 small islands and adjacent coral reefs. This marine national park is a part of the Gulf of Mannar Biosphere Reserve, which was the first Marine Biosphere Reserve in Southeast Asia, established in 1980. Stretching across the 160 kilometres distance between Thoothukudi and Dhanushkodi, this marine national park lies 1 to 10 kilometres away from the east coast of Tamil Nadu and is home to a myriad of plants and animals in its marine, intertidal and nearshore habitats. The park also forms a part of the third largest of the world’s oceanic divisions, which is the Indian Ocean and is thus one of the richest regions in the world in terms of marine biodiversity. The park boasts a mix of three marine ecosystems which are the coral reef, seagrass and mangroves. As you explore the area in a glass-bottom boat, you’ll see how the park is also home to specific algal communities, seahorse, seagrass, corals, blue whales, sea cucumber, turtles, pearl oyster, herring, barracuda, and the vulnerable species of mammals known as dugong.

Located on the eastern coast of Orissa, Gahirmatha Marine Sanctuary is the first and the only Marine Sanctuary of Orissa. The Sanctuary is a part of Bhitarkanika National Park of Odisha and is the only preferred nesting spot of the Olive Ridley turtle anywhere by the Indian Ocean. Covering an area of 1,435 square kilometres, this national marine park was also declared as a turtle sanctuary in 1997 by the Odisha government. The sanctuary is home to a variety of flora and fauna such as barking deer, wild boar, bear, leopard, crocodile, jungle fowl, samber and wild dogs. Gahirmatha Beach separates the Bhitarkanika mangroves from the Bay of Bengal and has become one of the main attractions of the sanctuary. The government with the help of NGOs have succeeded in creating a safe habitat for Olive Ridley turtles and transformed the area into a restricted zone to ensure complete protection for them. If you wish to see the turtles, your visit should be planned from October to May. You’ll find the sandy shores of Gahirmatha Marine Sanctuary full of hundreds and thousands of Olive Ridley turtles in various stages of the birthing process.

Another National Marine Park located in Andaman and Nicobar Islands, Rani Jhansi Marine National Park covers a total area of 256.14 square kilometres. This marine park was established in 1996 and is spread in the three islands of Ritchie’s archipelago, which is a cluster of several small islands. The protected area offers a unique collection of flora and fauna. The park’s natural habitats include coral reefs, lowland evergreen rain forest, lagoons, beaches, semi-evergreen rain forest and mangrove forests where a population of fruit-eating bats also reside. The marine national park is home to a diverse species of crocodiles and dugong. At the three islands of Ritchie’s archipelago, viz. Outram, Henry Lawrence and John Lawrence Islands, you can also spot Daniel’s forest lizards, Andaman Island grass skink, leatherback turtles, green turtles, Andaman water monitor, Asian monitor lizard, Olive Ridley turtles, Hawksbill turtles, Narcondam Hornbill, Andaman teal, Grey teal and more. The park is strictly reserved for the preservation and improvement of wildlife and biodiversity. Here, activities such as urban development, forestry, poaching, hunting and grazing on cultivation are not permitted. Their boundaries are well marked and circumscribed.

These national marine parks were set up to conserve marine biodiversity and also serve to propagate or develop the wildlife within its environment. Visit these marine national parks to  learn more about different protected reserves and their breeding grounds of several aquatic animals. If you have visited any of these national parks let us know your experiences in the comments below.

Also Read: 8 Of The Most Visually Striking Coral Reefs From Across The World