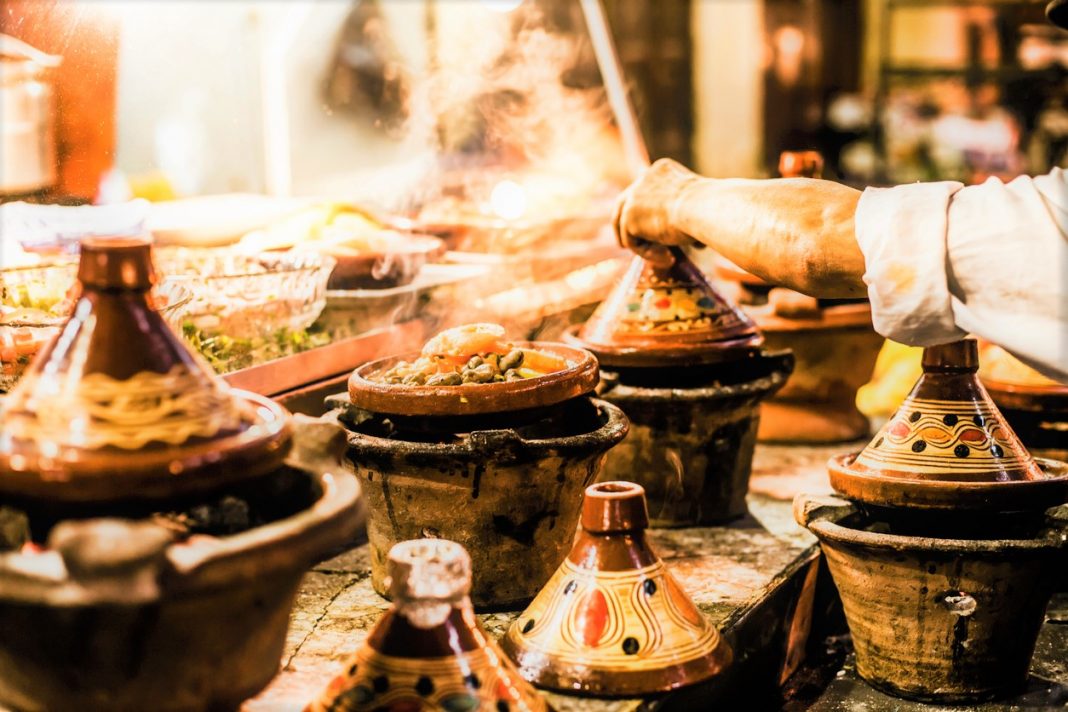 Morocco is famous for its delicious food. Aromatic and spicy and flavoured with an array of subtle spices, Moroccan dishes are the product of various influences. Berber, Jewish, Arab, Spanish, French, and even Roman cultures have resulted in a unique combination of mouthwatering flavours

Moroccan cuisine also varies within the country’s region from pastilla in Fes, to tanjia in Marrakech, medfloun in the Sahara region, and sardines in coastal Safi. Here are 22 Moroccan dishes you must try when you visit Morocco.

Harira is a Moroccan lentil soup that is usually eaten during the holy month of Ramadan. This thick creamy soup is made with chickpeas, lentils, noodles and spices. It is also eaten throughout the year as a snack or an appetizer.

Tajines are probably the most famous of the many Moroccan dishes. They are savoury stew that are traditionally made in a clay cooking pot with a conical lid. Chicken, lamb, beef, fish or vegetables are typically used, and then served with couscous and bread.

Make sure you try the lamb or chicken with almonds and dates, or plums; and the chicken with lemon and olives.

There are hundreds of different varieties of dates in Morocco. They are also an integral part of life, as the date palm is regarded as the “tree of life” in Islam.

These delicious sweets are quite similar to samosas. Deep-fried filo pastry (warqa) is filled with almond paste flavoured with orange flower water and cinnamon. They are then soaked in honey and eaten as a dessert or an appetizer.

Often known locally as “Berber Whiskey,” mint tea is one of the most popular drinks in Morocco. The green tea is steeped with a few sprigs of mint leaves, and heavily sweetened with sugar. It is drunk throughout the day in small glasses and is poured from a height to create a froth.

A delicious mix of sweet and salty, pasilla (also known as b’stilla) is a flaky pie that is usually made with pigeon, chicken or quail along with onions and spices. Pastilla is often served during wedding celebrations and special occasions, though you can also find it at street stalls, especially in Fes.

Msemen are thin, crepe-like pancakes made from semolina flour. The dough is kneaded then stretched until thin before being fried or baked. It is usually served with honey, butter, and soft cheese for dipping.

Also Read: 17 Delicious Types Of Pancakes Around The World

Not to be confused with tajines, tanjia is a Marrakech speciality that is named after the tall, jug-like clay pot it is cooked in. Tangia consists of chunks of meat (typically beef or lamb) roasted for up to eight hours in the covered pot. Various herbs, spices, and preserved fruits, such as garlic, saffron, cumin, salted lemon, and turmeric add a delicious flavour to the meat which is then served with chunks of bread.

Also known as Kaab el Ghazal or Cornes de Gazelle, these crescent-shaped pastries are n extremely popular sweet treat in Morocco. The crumbly biscuit is stuffed with a mixture of almond paste, orange flower water and cinnamon and is generally served – along with an assortment of other sweets – with tea.

Zaalouk is a smoked aubergine dip that is typically served with crusty bread. The dip is seasoned with garlic, paprika, cumin, chilli powder also includes tomatoes and olive oil.

Ghoriba are small, chewy, macaroon-like round biscuits. They are made with almonds and coconut and are traditionally flavoured with orange flower water. These biscuits are best enjoyed with a refreshingly sweet cup of mint tea.

Morocco is one of the world’s largest exporters of sardines, and they are also served across the country. They are often grilled and served with fresh tomato, onions, and peppers; sardines can also be stuffed, deep-fried, or served in a sandwich.

This traditional North African roast features a whole lamb slow-cooked (often overnight) in an underground oven. It is seasoned with cumin and salt and when it’s tender, it’s served with flatbreads, dips and yoghurt. Mechoui is especially popular at weddings and other events.

This filling bean soup is made with blended fava beans, along with spices like chillies, cumin and olive oil. B’ssara is often eaten at breakfast along with bread.

Makouda is a deep-fried potato cake that is a popular snack found across medinas in Morocco. It can either individually or stuffed in a sandwich. It can also accompany salads.

Couscous is a staple food of North Africa, and consists of steamed semolina that is served as an accompaniment with various dishes, like tajine, and vegetables, or eaten by itself. There are many regional variations of couscous which can be both sweet and savoury. It is traditionally consumed on the Muslim holy day (Friday) and topped with vegetables.

Sometimes called the “Moroccan snake cake,” this dessert is made up of coiled filo pastry is stuffed with almond paste and flavoured with orange flower water and pistachio. It is prepared in large tubes and cut into smaller slices to create individual pieces.

This light and spongy deep-fried Moroccan doughnut gets its name from the Arabic word for sponge – safanj. Sfenj is not made with sugar and can be eaten plain, sprinkled with sugar, or soaked in honey. It is often accompanied by tea or coffee.

A flower-shaped dessert, chebakya is popular during Ramadan. It is a fired sesame cookie that is dipped in honey and rose water with sesame seeds sprinkled on top. Chebakya (or shebakia) often accompanied by dates and a bowl of harira soup to break the Ramadan fast.

Loubia is a bean-based dish often eaten with breakfast in Morocco. It is made with white beans, salted lemon, and spicy tomato sauce. This is then served warm with bread.

These spongy pancakes are made with semolina flour. Bagrir has a light and airy texture and is usually served warm and is spread with butter and honey. They are riddled with tiny holes that soak up whatever sauce is served with it.

Also Read: 17 More Pancakes From Around The World You Have To Try

This is a dish that consists of chunks of meat or fish cooked on a brochette (or skewer). The meat, usually chicken, lamb, or beef, is rubbed in salt and spices and grilled.

If we’ve missed any of your favourite Moroccan dishes, do share them in the comments below.