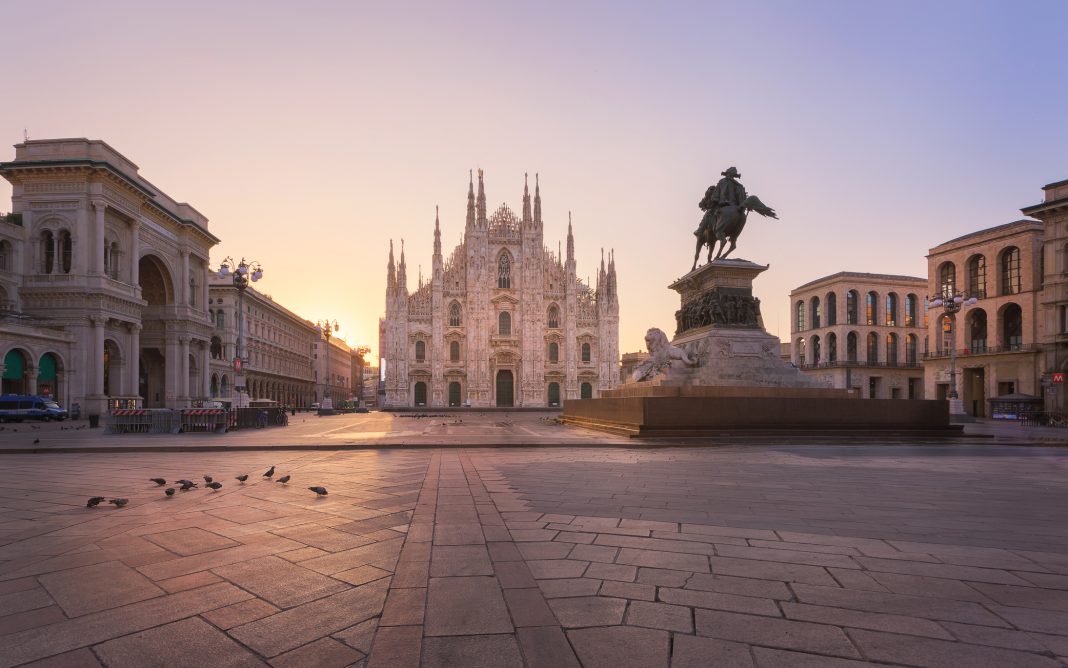 Milan doesn’t often top people’s lists of places to visit in Italy, but this city has a rich cultural heritage. There are plenty of things to do in Milan, whether you’re into fashion, food, or history, there’s something for everyone. And, of course, the entire fashion world flocks to Milan twice a year to look at the season’s fashions.

Throughout history, Milan has been home to some of the most famous artists in the world. Michelangelo, Leonardo da Vinci, Verdi, and Giorgio Armani all lived and worked here. So in between eating some of that delicious Milanese fare, don’t forget some of these amazing things to do in Milan.

The majestic Cathedral of Santa Maria Nascente, often simply called “Il Duomo,” is one of the largest in the world. Construction was started in the 14th century but wasn’t completed until the 1800s under Napoleon, who crowned himself there. The Gothic cathedral is topped with 135 stone pinnacles and over 2,000 marble statues. However, it is most famous for its stunning stained glass windows.

Across the Piazza del Duomo from the cathedral is the Galleria Vittorio Emanuelle, one of the oldest shopping malls in the world. Inside you can expect to find high-end designer shops, such as Prada, Versace and Luis Vuitton – definitely not the place to look for a bargain! Designed by Guiseppe Mengoni in 1877, the walls and shop fronts inside the gallery are decorated with ornate panelling and stucco art.

The Castello Sforzesco has been rebuilt and modified numerous times over the years. It was held by the ruling Visconti and the Sforza families, it was originally built in 1368 and rebuilt in 1450. It also houses the Musei del Castello Sforzesco, a series of small museums containing fascination art and artefacts. These include Egyptian antiquities, medieval armour, and Michelangelo’s Pietà Rondanini.

Although the 15th-century church is not one of the most famous in the world, it contains one of the greatest artistic masterpieces in the world, Leonardo da Vinci’s The Last Supper. This dramatic depiction of Christ’s last meal with his disciples was painted between 1495 and 1497. Entrance is limited, so make sure to book tickets in advance. You can also stop at Leonardo’s rediscovered vineyard.

One of the finest opera houses in the world, La Scala has hosted some of the greatest operatic composers and singers. Its opulent interior of red velvet drapes and gold furnishings and excellent acoustics make it a must-see. You can go on a guided tour of the Theatre, and the connected Museo Teatrale alla Scala, but consider getting tickets to a performance.

Housed in a former monastery, this museum contains a huge collection of important scientific inventions that have changed the world. The main attraction is the Leonardo da Vinci Gallery which houses working models and machinery, based on da Vinci’s drawings. Here you can see flying machines, model cars, as well as drawings, blueprints, and sketches on various topics.

One of the oldest buildings in Milan, this church was built in 379 AD by St. Ambrose. Much of the present Romanesque structure was built around it in the 12th century. Inside, it features some beautiful designs, including the Carolingian high altar and the mosaic dome.

One of Milan’s two canals, the Naviglio Grande was originally constructed in 1177. While it stretches across 50 kilometres, the part of the canal near the city centre is lined with old buildings, shops, cafés, restaurants, and clubs. While it’s best experienced at night, there are also many boutiques open during the day. The canal is also lavishly decorated for numerous festivals.

One of the most famous studios in the world, the San Siro has stood as a Milan landmark since 1926. Its iconic circular towers and colossal tiers seat just over just over 80,000. Among the largest stadiums in Europe, it is the home of AC Milan and Inter Milan football clubs.

10San Maurizio and the Archaeology Museum

Located in the 16th century San Maurizio Monastery is Milan’s Archaeology Museum. Dedicated to the history of ancient Milan, you can find Greek, Etruscan, Roman, and medieval artefacts here. The monastery itself is covered in vivid frescoes of biblical scenes.

Located in the Renaissance Palazzo di Brera, once a Jesuit college, the Pinacoteca is an art gallery. It is a part of the Accademia di Belle Arti (Academy of Fine Arts), and houses one of the country’s finest collections of Italian art. You can find the Marriage of the Virgin by Raphael, Pieta by Bellini, the Last Supper by Rubens, St. Francis by El Greco, and the Adoration of the Magi by Correggio here. Also, don’t miss the beautiful garden in one of the courtyards, the Orto Botanico di Brera.

There are plenty of other things to do in Milan, and if we’ve missed any, be sure to share them in the comments below.