More
Home Topics of Interest Culture Travel The Things Everyone Must Do In Milan, Itlay

Not all travellers will be able to give you a good account of a place you are just planning to go to. Similarly, I’ve got low-down in Milan from many well-travelled people, where they have described it as an industrial city, too dull and business minded. Some of them even went to the extent of comparing it with the beauty of Florence, calling it the ugly sister. Yet there are many great things you must do in Milan.

The problem with many of those travelling to Italy is that they end up visiting multiple cities, like Florence, Venice, Rome, Naples, Pisa, etc., and they tend to only look at these cities from the perspective of historical sites. So, when they talk about their experiences, it almost stops at unwanted comparisons of Milan with its more historical colleagues.

Milan as a city was in fact founded for people to work in. Naturally, it is quite industrial. People work hard and more importantly appear to be much more materialistic in nature, which is not bad actually. Milan might not be as history or art-oriented as Florence or Rome, but it sure has its fair share of museums and galleries to appease the artistic admirer in everybody. But what else can you see in this city? Let’s find out!

As similar conversations rumble on, let’s not forget Milan is the fashion capital of the world. Though not everybody likes fashion, Milan will make everybody a part of its fashionable nature, and it’s kinda cool like that. From looking at the best collections from each of the high profile brands to some local (not street) shopping, fashionistas have tons of things they must do in Milan.

Everybody in Milan is fashionable and loves modernity beyond any reader’s imagination. While fashion is one part of Milan, the other, the legendary Leonardo da Vinci and some of his most significant works.

Florence and Venice may have a more significant place in the history of Italy and the Italian Renaissance, but Milan remains the home of one of Italy’s most exceptional and most celebrated talent of all, Leonardo da Vinci. Da Vinci was a master of all trades, and his interests ranged from architecture and art to aeronautics, engineering and anatomy.

Among the art on display here are fascinating drawings which Leonardo created from the Codex Atlanticus, as well as some of his major paintings, manuscripts, a few working models, sculptures, and so much more. It is also home to St John the Baptist, said to be Da Vinci’s last painting. And finally onto the showstopper, The Last Supper, displayed on a massive wall in the refectory of the Santa Maria Delle Grazie, after it took nearly 20 years to restore the legendary work of the most famous artists throughout history.

Another highlight of the city of Milan is the spectacular cathedral. This cathedral reflects the scale of Milan’s history of creativity and ambition. Milan Cathedral is adorned with over 135 spires and 3,400 statues. But more emphasis is put on the ornate detailing in the architecture and art found here.

After its construction, the cathedral was maintained by Veneranda Fabbrica del Duomoji, a company created by Giangaleazzo Visconti, which is considered to Italy’s oldest ever company. Established in 1387, this company has been in operation for 630 years now and has been ensuring the preservation of the cathedral.

The cathedral itself is host to hundreds of drawings, models, sculptures, paintings, and many other varieties of artworks. On the Cathedral’s rooftop, the spectacle will continue to surprise, with a breathtaking view of the city. It will cost about € 12 to use the elevator and gain access to the rooftop, but much less if you use the stairs.

The Galleria Vittorio Emanuele II, opened in 1877, is the world’s oldest mall and houses one of the only certified 7-star hotels in the world (which of course way, way out of my league). Built for the first King of Italy, Victor Emmanuel II, by Guiseppe Mengoni, the magnificently opulent gallery houses the best brands in the world of fashion.

It doesn’t matter if you are just here to shop or just look at things, Milan will instantaneously make you a part of its fashion culture. Window shopping itself will bring joy and wonderment in the kind of fashion that is available here. Caution: Keep your pockets filled, because when you see what’s on display, you’re sure wish you were rich.

Watch a match at the San Siro

Home to two of Italy’s legendary football clubs, A.C. Milan and F.C. Internazionale Milano, the San Siro is one of the few remaining old-school stadiums, and certainly worth a vitit. Unlike many other European leagues, tickets are readily available even at the last moment, as the stadium has been seen some empty seats in the last few years. Go watch a game at the San Siro and rejoice in the football on display. 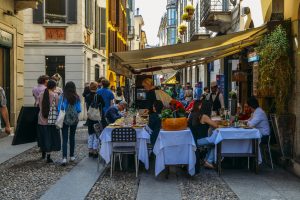 No matter what you perceive, Milan is an upmarket city. People are materialistically conscious about their lives and give a lot of importance to their food. Milan is one of the top Fusion Cuisine destinations of the world, and it is not only traditional varieties of food that are savoured here.

The Milanese are used to spending a lot of money on food, and so any traveller coming here has to be prepared to spend at least € 25-30 on each meal. One could also resort to small sized cafes and local restaurants for cheaper meals. Although wherever you go, the standard Cappuccino and Croissant remains a local breakfast staple.

Milan is not a solo traveller’s city. If it’s a solo trip you’re after, plan your stay, transit, and things to do well in advance. And most importantly, have a sizeable budget in mind, so you can enjoy this city to the maximum.

For a contemporary art experience, Milan may not suit the artistic soul, but sure has its share of history, especially some of Leonardo da Vinci’s famous works. Food is not cheap, but it’s amazing, wherever you eat it. So visit this city and go take part in all these things you must do in Milan. Why not check out da Vinci’s lost vineyard or some other great things to do in Milan.