More
Home Topics of Interest Food & Drinks The Story Of Mysore Pak: An Ode To Sugar 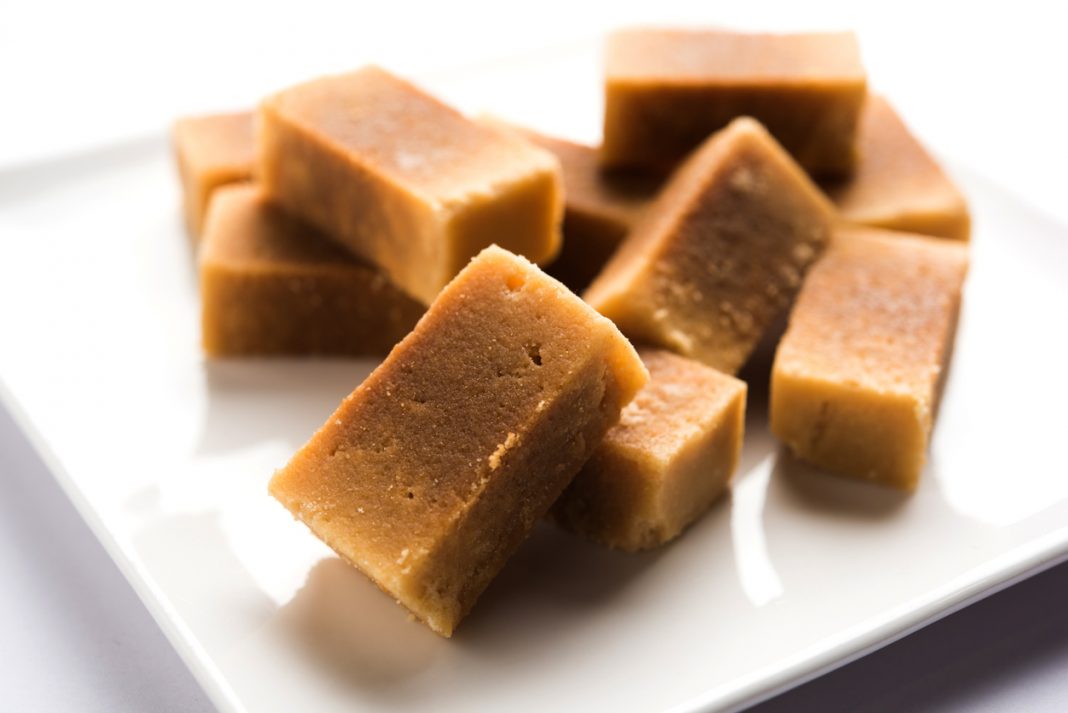 For those unfamiliar with south Indian sweets, the Mysore Pak is a rich satisfying delicacy made with the goodness of flour, sugar and butter. One of the signature sweets of Karnataka, the origin of this dessert dates back 70 years to the kitchens of the Royal Mysore palace. The texture of this delicacy is similar to that of a dense buttery cookie.

Available almost everywhere in India now, the authentic Mysore Pak is only available at a sweet stall called Guru Sweets located near the Devaraja Market in Mysore. Indulging yourself in this legendary sweet from Mysore should be at the top on your to-do list.

How Did The Name Of Mysore Pak Come About?

Traditionally made of sugar, ghee, and besan, Mysore Pak comes in two basic varieties in several flavours, either in a crumbly, porous rectangular block or a soft, mushy variety.

The royal family had asked their cook, Kakasura Madappa to produce a sweet that was different. As a courtesy to the king, the name Mysore was added to the word ‘pak’ from ‘nalapaka’ which in Kannada means the person who makes the ‘paka’ or sugar syrup.

How Was Mysore Pak Invented?

According to legend, former Mysore king Krishnaraja Wadiyar IV was a food connoisseur. One day, as the king sat down to have his lunch, his royal cook Kakasura Madappa realised he had forgotten to prepare a dessert. When the king inquired about the missing course, Madappa quickly concocted an unusual mix of gram flour, ghee and sugar to make a soft fudge-like mixture. The king was ecstatic when he tried this hot sweet. When he asked for its name, the cook quickly named it Mysore Pak. Pleased with this delicacy, the king eventually asked Madappa to open a shop (the Guru Sweet Mart) outside the Amba Vilas palace grounds.  Soon, this royal sweet was officially designated as the ‘king’ of sweets in south India.

How Did Its Popularity Spread?

Anyone with a sweet tooth knows that the much-loved Mysore Pak comes in two varieties—hard, porous blocks that restaurants and small stores sell from glass jars, and a wet ghee-infused version that dominates most cities today. Traditionally, it was served in weddings and other festivals across southern India.

Recently, the hard version is slowly being replaced by the new age version of Mysore Pak, a  softer ghee Mysurpa. First, it was launched by Shri Krishna Sweets and later occupied the shelves of every sweet shop in south India. It is now the largest selling sweet in south India.

The Controversy Of Mysore Pak

Caught in a bitter controversy, the owners of the famed Mysore Pak have decided to officially file for a GI tag.

Two days after a tweet by a columnist Anand Ranganathan, where he joked that the Modi government had granted the Geographical Indication (GI) tag for Mysore Pak to Tamil Nadu, the family of Madappa, a Mysore Palace royal cook who invented the sweet, felt it’s time they got recognition for spreading sweetness in the world.

How To Make Mysore Pak

Every dish has a story, about its origin, a particular uniqueness about where it came from, and the ways of the people living there. It’s a way to culturally identify different places, through their unique flavours. India has a long and rather wonderful history of hundreds of cuisines and accompanying desserts, and Mysore Pak reigns among the top favourites. The moment you sink your teeth into the square, you will feel like you’re on cloud nine. Wash down this beloved sweet with some coffee for an ultimate kick.

Also Read: Restaurants In Mysore No Foodie Should Miss