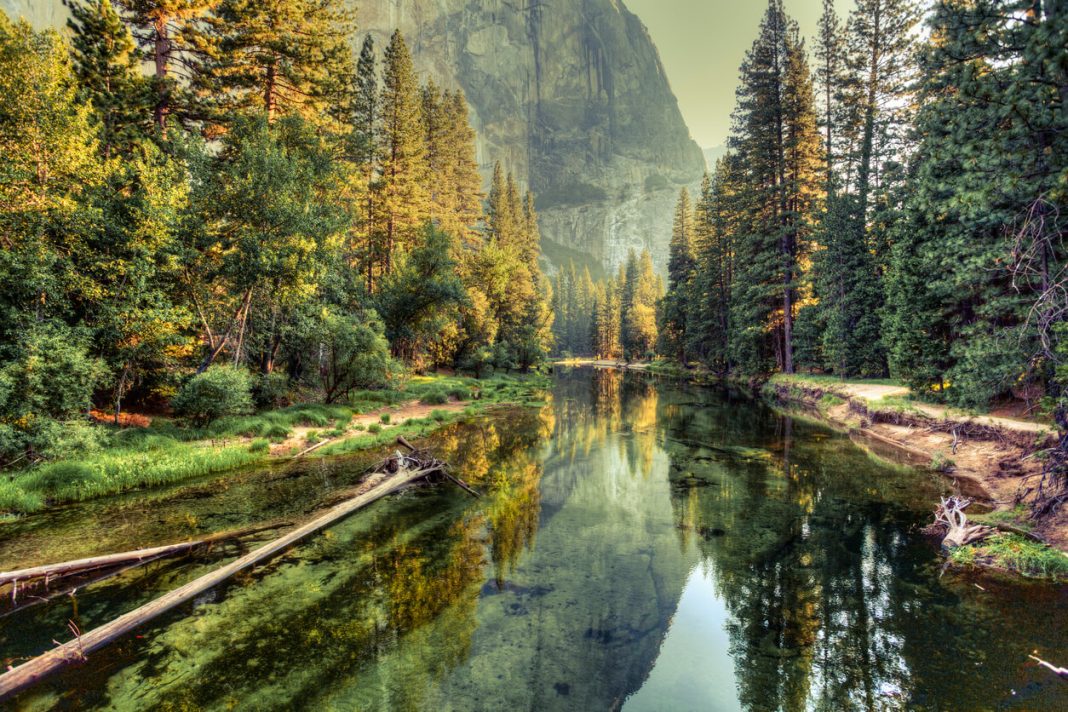 There are 60 official National Parks in the United States. They are all home to jaw-dropping landscapes and rich biodiversity, protected for the enjoyment of future generations. Hundreds of millions of people visit these parks each year to see their amazing nature and wildlife.

These parks feature everything from swampy marshes to dry deserts and deep canyons, covering a range of ecosystems. Here are the top 11 must-visit national parks in the United States.

Yellowstone has the distinction of being the very first national park in the world. It covers over 2 million acres in Wyoming, Idaho, and Montana. It is also home to beautiful lakes, steep mountains, and of course famous geysers such as the Old Faithful. There are also many beautiful and colourful hot springs, created by microscopic organisms, and lots of bison, bears, sheep, moose, and wolves.

The most visited of all the National Parks in the United States, the Great Smoky Mountains National Park in North Carolina and Tennessee had over 11 million visitors last year! Free admission combined with amazing views of its mountains and valleys, and remnants of Southern Appalachian mountain culture, make it a must-visit. You can also witness rare natural phenomena, such as synchronous fireflies.

Carved by the Colorado River in Arizona over millennia, the steep-sided Grand Canyon is one of the seven natural wonders of the world. Over 400 kilometres long, and almost 2,000 kilometres deep, the park has breathtaking views, thrilling hiking trails, and beautiful waterfalls, such as Havasu Falls. The Lipan and Colorado River Viewpoints also offer terrific views of the sunrise and sunset.

California’s Yosemite National park is most famous for its gorgeous waterfalls, among them Vernal Falls, Bridalveil Falls, and Yosemite Falls. At night, you can see spectacular lunar rainbows (or moonbows) over the falls. Yosemite Valley is also known for its unique granite rock formations, such as the Half Dome and El Capitan, and its beautiful pine forests.

Covering nearly 1 million acres in Washington State, Olympic National Park actually has no roads at all. Located on the Olympic Peninsula, it has something for everyone. From glacier-capped mountains to temperate rainforests and wild coastline, the park actually has three distinct ecosystems for you to explore.

The Bryce Canyon is actually a giant natural amphitheatre filled with magnificent colourful rock formations such as spires and hoodoos (odd-shaped pillars). Located on the Colorado Plateau in southern Utah, the park covers 35,835 acres and is unforgettable both during the summer and the winter.

Located near the more famous Yellowstone, Grand Teton National Park in Wyoming was once full of ranches and farms. Now it offers some of the most spectacular prairies in all the national parks in the United States. It is surrounded by the majestic Teton Mountain Range whose highest peak, Grand Teton, offers many adventurous activities like hiking and skiing.

When it was established in 1929, the Arches National Park in Utah didn’t include what is now its most famous landmark, the 65-foot “Delicate Arch”. However, the park has continued to expand over time and now covers almost 77,000 acres. It’s amazing sandstone monuments and rock formations make it the perfect place for rock climbers and hikers.

Glacier National Park in Montana is known for its stunning lakes. Spanning three mountain ranges over a million acres, it has over 700 beautiful lakes. It has excellent hiking trails, such as the Trail of the Cedars and Iceberg Lake Trail. Also, don’t miss the spectacular drive on Going-to-the-Sun Road.

The Virgin River carves its way through the Zion Canyon in Utah to create one of the most striking national parks in the United States. The rock towers, sandstone canyons, and sharp cliffs are a paradise for thrill-seekers. Don’t miss the 1,500-foot natural staircase or the long hike through the narrowest section of Zion Canyon, “The Narrows”.

Rocky Mountain National Park in Colorado is famous for its stunning sweeping vistas. Its magnificent landscapes contain 150 lakes, over tall mountains, and miles and miles of streams and hiking trails. Located close to Denver, they have extremely diverse ecosystems, from wetlands to pine forests and alpine tundra.

National Parks often rely on visitors and donations to remain beautiful and protected, and you can find out more about the many ways you can support their preservation at Million Mile Secrets, here.

Are there any other must-visit national parks in the United States we’ve missed? If so do share them in the comments below. You can also check out these breathtaking sites you can see before you die.