Known for its mix of urban elegance and provincial charm, Bordeaux is affectionately called “Port of the Moon” because of its location on a crescent-shaped bend of the Garonne River. It has a strategic setting, allowing trade to flourish over centuries.

With a wealth of architectural treasures decorating the city, UNESCO has labelled over 350 of its awe-striking buildings as world heritage sites since 1988. Here are some of the best places to see in Bordeaux.

Pray at the Cathédrale Saint-André

The magnificent sight of the St. Andrew’s Cathedral, or Cathédrale Saint-André, will keep you spell-bound for a long time. Dating back to the 12th-century it sits in the heart of Bordeaux. The holy site is a UNESCO World Heritage Site.

This cathedral was once a part of the Route of Saint James pilgrimage trail. Its grand neoclassical palace was built in the 18th-century and the dramatic difference in architectural styles can be seen. The cathedral also hosts the Bordeaux International Organ Festival during the summer. 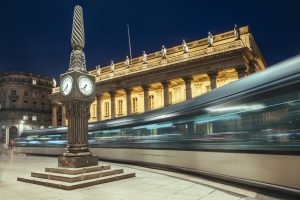 Watch the feet of the ballet dancers glide across in a smooth floor at Bordeaux’s Le Grand Théâtre, a hub of city life and the site of an ancient Roman Forum. The theatre is often called the emblem of the city. Built in 1780, its Neo-Classical style is sure to leave you wonderstruck. The Palais Royal and Théâtre Français in Paris are the inspiration behind this building. For a memorable experience, spend an eventful evening at the theater and enjoy performances by the National Orchestra or National Ballet of Bordeaux.

One the most recognisable sights in France, Bordeaux’s Place de la Bourse was designed by architect, Ange-Jacques Gabriel. Built between 1730 and 1775, it once held a statue of King Louis XV, which was destroyed during the French Revolution. Later, a beautiful mountain replaced the gigantic statue.

The place lies amidst other elegant classical buildings from the 18th century. These graceful quayside buildings stand just above the banks of the Garonne River, truly a beautiful sight for any visitor. Take a scenic walk alongside the Garonne to admire the inspiring architecture.

Let your prayers be answered at the Basilique Saint-Seurin 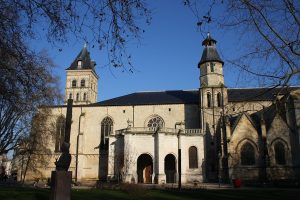 Among the many heritage sights of Bordeaux, comes another exquisite medieval Basilica. Built in the Romanesque style typical of the churches on the route to the Santiago de Compostela, this structure dates back to 11th century. The choir, featuring a stone abbot’s throne and ornate stalls, was decorated during the 14th and 15th centuries. Come home to blessings, come home to Basilique Saint-Seurin. If you haven’t hand enough, check out some other amazing old buildings.

While there are many world’s attractions, Bordeaux stays at the top of romantic destinations. Visit the most amazing places in Bordeaux, while experiencing historic bliss like never before.

As I flipped the page over, I was infested by the place,

I longed for a detour into historic bliss,

Little did I know of the exquisite reflections; meanwhile the motto rings,

Alone rules over the moon, the waves, the castle, and the lion.

At the first sight shone the wine lights,

At the second, glistened the fine nights.

While the city builds strong on Garone’s bend; the motto rings from behind,

Alone rules over the moon, the waves, the castle, and the lion.