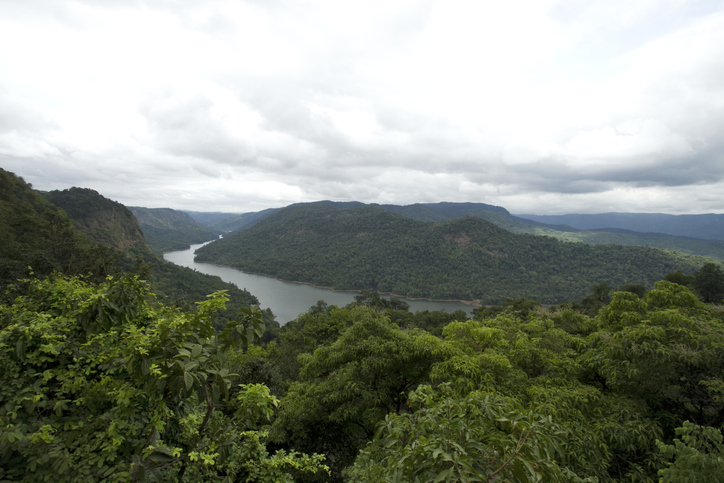 Karnataka, the land of many important rivers, has hundreds of rivers with several tributaries, that have originated in the Western Ghats ranges and hill stations. The rivers in Karnataka are spread around 300 kms of coastline where they merge into the ocean. There are seven river systems in Karnataka, namely Kaveri, Krishna, Godavari, Palar, South Pennar, North Pennar, and west flowing rivers.

The rivers in Karnataka are vital for the tourism industry. The ancient temples built on the banks provide tourists a unique experience. A source of water for household and drinking purposes, Karnataka’s rivers are a source of hydropower and integral to agriculture.

Here Are The Top 10 Rivers In Karnataka

1. The Ganges Of The South: Kaveri

Situated in the district of Coorg, the river Kaveri or Cauvery is the largest river in Karnataka. Known to devout Hindus as Dakshina Ganga (the Ganges of the South), it is considered holy and sacred. The origin of the river is a famous pilgrimage spot Talakaveri which is nestled amidst the Brahmagiri Hills in Coorg. With a rocky bed and high banks under luxuriant vegetation, the river is also important for its irrigation canal projects. You can take a dip in the water at a few shallow and safe points along the river.

2. Exhibits One Of The Largest Congregations Of Wild Elephants: Kabini

Originating at Wayanad in Kerala, the river Kabini is a tributary of Kaveri that flows eastward to join Kaveri at Tirumakudal Narsipur in Karnataka. Also called Kabani and Kapila, this river in Karnataka is situated at a distance of 220 kms from Bangalore and 80 kms from Mysore. It’s known for exhibiting one of the world’s largest congregations of Asiatic wild elephants; most of the elephants of the surrounding forests converge at Kabini during summer. The backwaters of the Kabini reservoir formed by the river are rich in wildlife. Kabini is a great vacation destination for tourists to pitch their camps on its banks and enjoy lush greenery.

Originating from the Ballala Rayana Durga in the Chikmagalur district, Hemavati joins the river Kaveri near Krishnarajasagar and is one of the main tributaries of the river. Adding to the beauty of the Western Ghats, this is one of the rivers in Karnataka that flows through a distance of 245 kms. A number of resorts have developed near the river offering a variety of adventure activities such as banana boat rides, boating, swimming, and kayaking for adventure enthusiasts.

The second longest river in peninsular India, and the longest river in Karnataka, Krishna, formerly known as Kistna, originates in Maharashtra and passes through Karnataka. With a total course of about 800 miles (1,290 kms), this river in Karnataka flows east to Wai in Maharashtra and then in a south-eastern direction past Sangli to the border of Karnataka state. The Krishna has a large and highly fertile delta which provides water for irrigation.

5. Known For Having The Sweetest Water In The World: Tungabhadra

Tungabhadra is considered to be a sacred river, and is a chief tributary of Krishna formed in Shimoga by the union of the Tunga and Bhadra rivers. Flowing east across the Deccan Plateau, the river joins the Krishna river in Andhra Pradesh. Having the advantage of a river, a host of irrigation canals and aqueducts were constructed during the reign of the Vijayanagara kings. Playing a major role in forming the religious and political history of Hampi, the river, along with the hills, had formed the northern barrier of the capital. This river in Karnataka is also considered to have the sweetest water in the world.

Rising through the Nandi Hills in Chikkaballapur District of Karnataka, the North Penneru river or the Uttara Pinakini has a total length of about 560 kms. Also called Penner river or Northern Penner river, the upper basin of this river in Karnataka was formerly covered by xeric shrublands, tropical dry forest, and thorn forest. Due to clearance for grazing and overharvesting the forests for firewood and timber, most of the dry tropical forest has disappeared and been replaced by thorny shrublands. As the river is seasonal, it becomes a thin stream during dry periods and a torrent after the rains.

Originating at Ambuthirtha in Thirthahalli Taluk, the Sharavathi river is one of the few westward flowing rivers that flows north-west through the Western Ghats. Taking a spectacular leap at a height of 292 metres, it forms the famous Jog Falls before joining the Arabian Sea at Honnavar. Rich in biodiversity, this river in Karnataka is home to many rare species of flora and fauna. With a total length of around 128 kms (80 miles), the Sharavathi river has been used extensively to generate hydroelectricity. A favourite among visitors, the backwaters of the Sharavathi river offers many exotic sightings for birders as well as an opportunity for water sports like kayaking, windsurfing, and canoeing. It is also believed that this is the place where the Hindu god Rama broke a bow to win the hand of Sita.

8. A Lifeline To The People Of Karwar: Kalinadi

Originating from Diggi village in the Western Ghats, the river Kalinadi is a river flowing through the Uttara Kannada district. A lifeline to around 4 lakh people, this river in Karnataka supports the livelihoods of fishermen living on the coast of Karwar. For the generation of electricity, there are many dams such as Supa Dam built across this river. Located by the coastal highway Kali river bridge, the Sadashivgad fort is a popular tourist destination that has been built above the confluence of the river.

Flowing entirely within the western part of the state of Karnataka, Gangavalli river is a small river that originates in the Western Ghats, south of Dharwad. Embracing the name Gangavalli from the goddess Ganga, the village in this area is also called the same name. Also known as Bedthi river, it has dense evergreen forests along its path. Flowing for a distance of nearly 161 kms, this river in Karnataka falls from a height of 180 metres at Manjuguni-Ankola on its course towards the Arabian Sea.

10. Translating To Destroyer Of Sins: Aghanashini

Originating in the Western Ghats of Uttara Kannada district, the river Aghanashini flows westward towards and meets the Arabian sea at its namesake village. Situated in Sirsi town, the birth place of Aghanashini river is called Shankara Honda. Due to the absence of dams, its course  remains unchanged. Often called the lifeline of Kumta, this river in Karnataka is the source of livelihood for the fishermen who live along the river banks. Aghanashini translates to Destroyer of Sins, and is believed to have pure water that nurtures the life of living beings along its path, when left flowing free.

Why Should We Protect Rivers In Karnataka?

Rivers in Karnataka play a huge role in the life cycle of the planet, as they transport drinkable water and provide nutrient-rich soil for agriculture. Vital for a vibrant ecosystem for many species, rivers also account for some of the richest biodiversity in the world. Many people depend on rivers for their livelihood and way of life. Therefore, it is our duty to take precautions and encourage others to protect these water bodies. While visiting these rivers in Karnataka, pick appropriate clothes and travel responsibly.

In fact you can start saving the rivers at home—use biodegradable products, as a lot of harmful chemicals in non-biodegradable products end up back in the rivers. You can even volunteer for clean-ups in your community which will ultimately eradicate water pollution. And most importantly, we should educate others to help understand the importance and value of our fresh water bodies.

It goes without saying that clean and fresh water is essential for humans to survive. So next time you visit Karnataka’s rivers try and instil these tips. These small measures we take will collectively and positively improve the health of our rivers!

Also Read: The most beautiful waterfalls in Karnataka to visit