After having done an extensive coverage of Portugal early this summer, me and my wife Jayeeta Chatterjee Sengupta, who also happens to be a photographer like me were contemplating on hitting another destination before the precious (and rare) European summer was gone.

After careful consideration of several options, we chose Norway to be the 18th European country in our kitty with a stopover in Copenhagen, Denmark. So here comes Denmark and Norway for you as we saw and captured it (in our hearts and through the lens of our camera) in this Scandinavian summer exploration.

Originating as a 10th century Viking fishing village, today’s Copenhagen has boastingly worn the tag of ‘happiest city in the world’ for years now which I’ve always curiously tried to reason in my mind. But a visit to this Danish capital would make it clear to you. Happy go lucky cosy terraces all along the harbour, free-flowing wine, fish and chips and a laid back contented attitude among the locals gives the city the X-factor.

Talking about the backdrop of the city from a photographer’s standpoint I must say that the cobbled, bike-friendly streets, architecture reflecting the much famed Danish flair for Neoclassical design, the renowned 17th century harbor ‘Nyhavn,’ lined with bright pastel-colored houses and historic landmarks like ‘The Little Mermaid’, the ‘Tivoli Gardens’ and the ‘Amalienborg’ and ‘Christiansborg’ palaces, sets the scene for an enticing romantic weekend getaway.

The only thing that might disrupt with the romantic ambience is the cost of eating and lodging in the city. Don’t let yourself be fooled by flight carriers offering cheap rates to fly to Copenhagen. Once you land you are in one of the busiest cities of Scandinavia. So if you are planning for a budget trip you might want to give it a miss. But other than the cost, this is a lively city with very helpful clearly English spoken locals that are waiting to be explored.

Rugged is putting it very gently when it comes to almost 90% of Norway. This was one of the main reasons why the Vikings ventured south and many Norwegians chose to leave and settle in the US. But today, the West of Norway adorned with majestic mountains, glaciers, waterfalls, fjords and the sea has revived back it’s bygone days of glory with millions of tourists visiting it every year. And what’s the reason for them coming despite Norway being one of the most expensive destinations in the world? Experience of a lifetime!

We started our journey from Bergen, the second biggest city of Norway nestled in the bosom of 7 mountains and 7 fjords thereby making it the most popular gateway to the West Norwegian fjords. With its quaint colourful wood houses at the waterfront or tiny settlements creeping up the hillsides, docked ferry boats begging to be boarded to shoot off to the fjords coupled with an active nightlife, Bergen makes up well for its round the year notorious weather.

And if you wish to witness the Bergen from the 18th century, you must visit ‘Gamle Bergen’ which’s is an open-air museum with more than 40 wooden houses, representative of the Bergen architecture in the 18th and 19th centuries. The houses with ornate time boxed interiors reflect the picture of life in a small town with its dwellings, different shops, baker, barber, dentist, photographer etc. Every hour you can also watch a small play in the central square of the town performed by the artists wearing traditional Norwegian costumes that represent an aspect of the 18th-century life at Bergen. It’s a sight worthy to be witnessed.

From Bergen we took the Flam Railway, renowned as one of the most scenic train journeys in the world (The journey was in fact ranked #1 on Lonely Planet Traveler’s list of “The World’s most incredible train journeys of 2014”) to reach Flam (changing a train at Myrdal, the overall journey takes roughly 3 hours) and truly the name lives up to its expectations. It is one of the steepest standard-gauge railway lines in the world, with 80% of the journey at a gradient of 5.5%.

The train runs through stirring landscapes, lush green valleys, snow-clad mountains, foaming waterfalls, and quaint villages through 20 tunnels and offers so many viewpoints that, for many people, a single trip up and down is not enough. One of the highlights in the journey is when the train stops at the mouth of Kjosfossen waterfall to allow all passengers to get down and take pictures while suddenly a Norwegian folk music starts playing and a minuscule figure of a lady appears amidst the mist on top of the mountains at the edge of the waterfall who dances to the tune. It truly is a spectacle worth experiencing.

Upon reaching Flam which is a small village situated in a dramatic setting at the lap of Sognefjord, Norway’s longest and deepest fjord, we took a cruise to Gudvangen, another tiny village in the municipality of Aurland in Sogn og Fjordane county via the Nærøyfjord, a UNESCO world heritage area that is considered one of the world’s most beautiful fjord landscapes. The narrow and spectacular Nærøyfjord, (literally meaning the Narrow Fjord) is a branch of the Sognefjord and is truly a marvel of creation.

Surrounded by steep mountains that stretch up to 1800 meters above sea level with waterfalls cascading down and picturesque villages dotting the landscape, the beauty of Nærøyfjord can neither be expressed in words nor illustrated via pictures. It can only be experienced from the deck of the cruise with a 360-degree view of nature all around you that ought to get absorbed in you over the hours you travel through the fjord.

We also visited several other fjords closer to Bergen, out of which the one worthy of mention is Osterfjord, where we witnessed jaw-dropping sceneries such as serene hamlets on lush green patches of land nestled on the lap of rocky mountains surrounded by turquoise water of the sea and innumerable fountains lined up one after the other in very close vicinity while Norwegian folk music played in the cruise setting the ambient scene. A highlight of this journey was getting the cruise astoundingly close to a beautiful waterfall named Heskjedalsfossen and filling up fresh mountain water for distributing among the travellers for drinking. That’s truly tasting nature in its native form.

So overall Norway is a once in a lifetime experience that mustn’t be missed and there’s so much to explore that we couldn’t get enough of it in a week. And a stopover in the lively city of Copenhagen is surely a refreshingly winning deal. But you need to bear a couple of things in mind before you plan a Scandinavian summer.

But despite all these, we’ve decided to go back to Norway once again, maybe this time to the north during winter amidst -26 degrees to witness the Northern Lights. But maybe we’ve to wait a couple of years for my son Ricky to grow up older than his current age of 5 years to withstand that amount of cold. And I guess he will be able to manage as he’s crazy about travelling to new places and meeting new people. 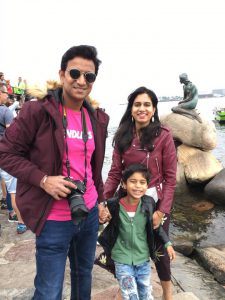