After an argument with the boys about who would wear the 4 layers of clothing, a pair of heavy boots and gloves to step out into the -19°C freezing night to fetch the takeaway dinner from our cabin, S and I got out. We cribbed to each other about having to do this while the boys stayed cosy at the Lake Inari Mobile Cabin where we were put up.

We continued to crib as we helped each other with our shoelaces. It was just after sunset and the Finnish people eat their dinner early. We stepped out of the beautiful wooden cottage in Lapland, the northern part of Finland and then WE SAW IT!  Bright and beautiful! The famed northern lights!

There were swirls and rays of fluorescent green and dancing lights across the dark sky, moving gently from one horizon to the other. I let out a loud scream and almost swooned. This is nothing but a dream come true. Aurora Borealis felt like a low hanging cloud, it felt like a little long jump from a beanstalk and you can reach it. But it’s far far away.

I was a little girl when I heard about Northern Lights for the first time. My mother reads a lot and often tells me stories that fascinated her. Sometimes, due to her art of storytelling and the boredom of repeating the same old Goldilocks stories for the nth time, she reset the fairy tale with an Aurora in the background. According to my mother’s rendition, the bear family had gone to see the auroras by the lake. There was no Google back then to help me see the image and I had visualised Aurora Borealis on my own from the time I was little.

We previously tried seeing the Aurora Borealis in Alaska. It was a family holiday and all we saw was a faint green light covered by thick clouds. We waited for hours for the clouds to clear. Around 3.30 am, the clouds did clear but so did the lights. It was so faint and almost invisible, but my thirst to see it clearly started right then.

That’s when I began planning to go see them in Finland.

See here’s the thing about watching Aurora Borealis. You need:

To be in the right location to view them

You can see the northern lights near the North Pole. Speaking geographically, you can see them in Alaska, Norway, Finland, Sweden, Iceland, Canada, and sometimes in Northern Ireland.

Sometimes, even though the lights are there, they are too faint and you cannot see it. You might be in a place where you can see it, there might be no cloud over, and yet, it might not show up. Be prepared to be disappointed but also to be awed by its magnificent beauty.

A clear day without a Cloud Cover

The clouds are usually much closer to the earth than the Auroras. Hence, if there’s a heavy cloud cover, you might not be in a position to see it. Or you might see it vaguely, which isn’t great.

To be away from the city’s traffic & pollution 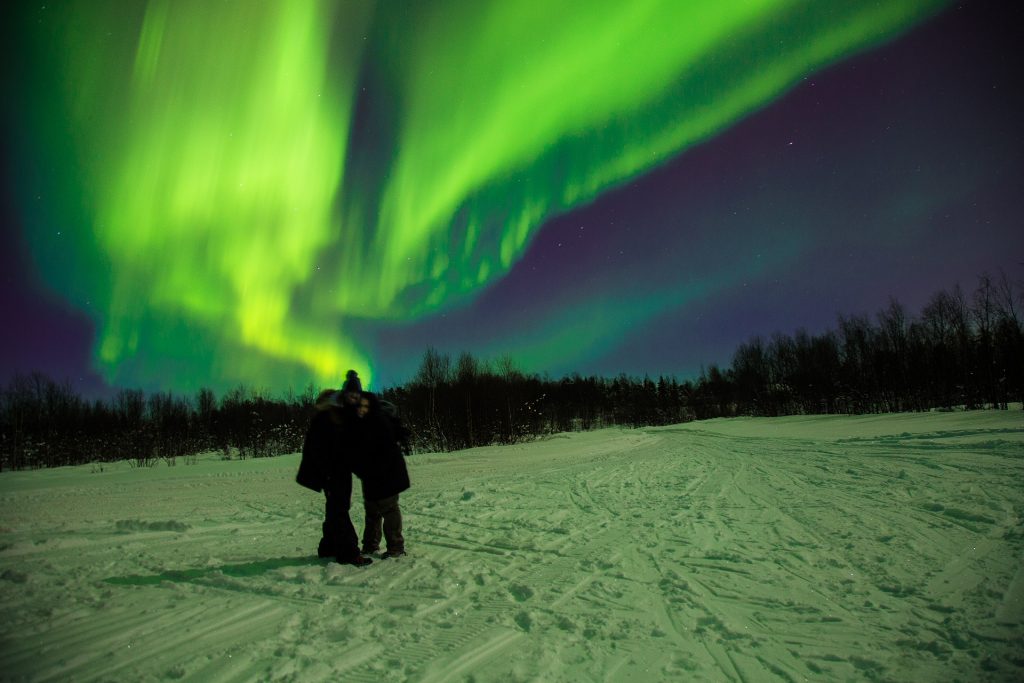 You won’t believe it. It really matters. Inside the city, the pollution forms a thick layer between you and the auroras. So if you want to see the glory, stay away from the city and even better – find a mountain nearby.

It has to be very cold

The aurora borealis is stronger if the climate is colder. It’s true. So if you are in the Arctic and the temperature drops, don’t be sad. You are up for a treat.

The moon to be not too bright

It’s like 2 bright people in the room; neither of them will shine well. Aurora and the moon are bright lights and when there’s a moon, the shimmer of Aurora might not be as strong.

Most importantly, you also need to be extremely lucky for all of these things to happen at the same time.

That night, Feb 16th, 2016, we were all very lucky. Lucky to see the gorgeous Aurora Borealis in Finland. We saw it in gleaming pinks, purples and of course in bright green colour! Dancing like magic up above us.

Why do they happen?

When charged particles escape the sun, they take 18 days approximately to travel to earth. They interact with the earth’s atmosphere to form these beautiful coloured lights. Due to the earth’s magnetic field, they get deflected and are present only in the polar region.

Why should you plan one?

It’s not a fashion statement, it’s not an adventure activity, it’s not a monument. It’s seeing something that’s beyond everything. This natural phenomenon is more than what’s happening on the earth. When you stand there looking at the brilliant lights, you are seeing something rare, something that no man has any power or right over. Just pure display of Nature’s art.

The right time is tricky and you need to calculate it to the T. Aurora borealis happens throughout the year. But you will be able to see them only on certain days of the year. The polar region has almost no nights for 3-4 months a year and during this time, the chance of Aurora is nil.

The best time of the year to see Aurora is usually from September to March. During the months of November, December and January, it snows in the area and hence there is a high chance of cloud cover. So your best bet to see the northern lights would be September to November and Feb and March. We went during mid-Feb.

Can you predict Northern Lights?

Yes. You can predict Auroras 18 days before when the solar flare leaves the sun. They are measured with something called a KP Level or KP Number, a system of measuring aurora strength. It ranges from 0 to 9 (0 being very weak, 9 being a major geomagnetic storm with strong auroras visible). The higher the number, better the chance of spotting an aurora. Anything above Kp5 is called as a geomagnetic storm.

Also read: If you happen to go hunting for northern lights, here are some other things you can do in the places they are visible – Finland, Iceland, Alaska, Norway, Canada, and Sweden.