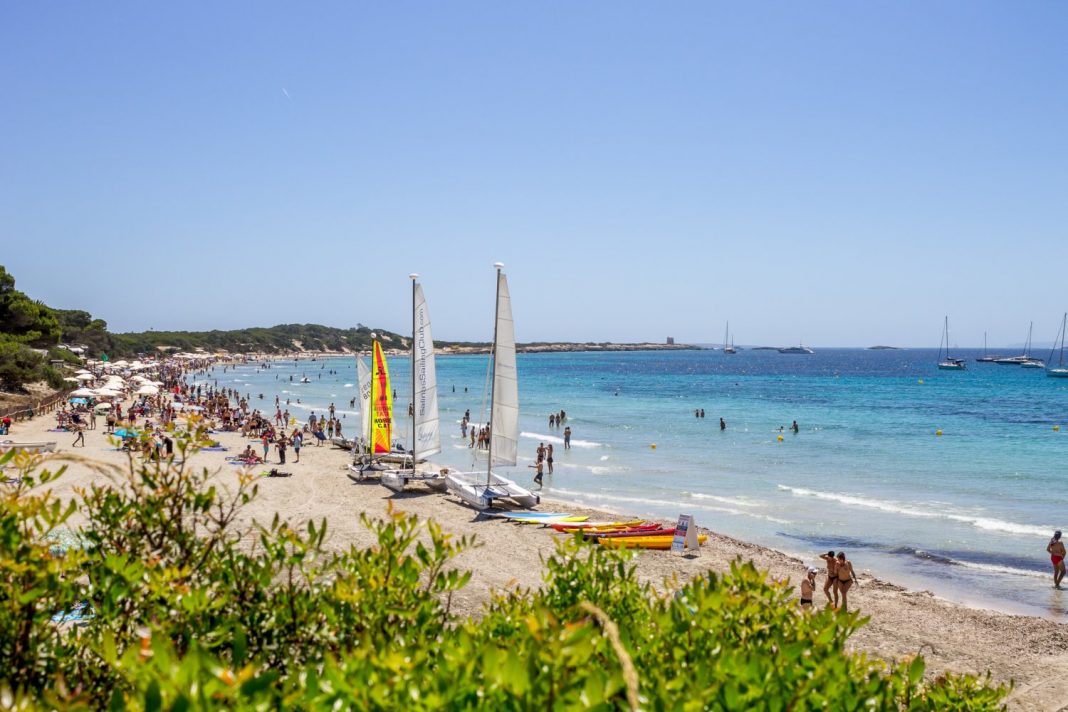 Stretched at 3000 miles, the coastline of Spain is graced with beautiful beaches. The region is also home to the highest number of beaches globally to have been awarded the coveted Blue Flag status for their outstanding environmental and quality standards. From pristine beaches, stretches of golden sand, and flanked by restaurants serving delicious food, the beaches in Spain have it all.

Here Are Some Of The Best Beaches In Spain

La Concha is one of the best city beaches not only in Spain but in Europe. Situated in the northeast corner of Spain, the beach boasts of stretches of fine golden sands. With the sweeping views of the bay and characteristic sophisticated white promenade, this beach is perfect for an Instagram post. Its setting is so breathtaking because it’s flanked by a striking cityscape and it’s made even more gorgeous by San Sebastian’s hilly topography. Sheltered from the elements by Urgull hill on one side and Igueldo hill on the other, La Kontxa’s water is nearly always calm making it a perfect spot for swimming.

Featuring pristine sandy beaches and rock formations created by the sea Playa de Las Catedrales is the best beach in Galicia. Located in northwest Spain, and close to the city of Ribadeo, the region is known to have unpredictable weather year-round but during the summer months, this beach is a paradise, and because it’s not known to many you will practically have it to yourselves. Playa de Las Catedrales has some of the most stunning rock formations anywhere in the world.

Known as the “beach of silence” Playa Del Silencio provides a quiet, untouched beach experience. The rugged region of Asturias is known to be home to the best beaches in Northern Spain and this beach is considered to be the best of the best. The natural rock amphitheatre surrounds the entire beachfront area. blocks almost all the wind and makes the beach, quiet, and serene. Though the underwater rocks make the beach unsafe for swimming, you can wade through the pristine water and relax on the sand.

Beaches Of Sitges, Catalonia, Near Barcelona

The shores of Sitges are home to some of the best beaches near Barcelona. Located just a few miles from this thriving city, Sitges makes for a popular day trip from Barcelona and a few hours here is time well spent. Situated right off the main drag in the city center, Playa de la Ribera is most popular with gay holidaymakers. Families are also drawn to its soft sand and shallow waters.

Barcelona is known to be the home of several gorgeous beaches, but Bogatell is the most popular one among the locals mainly because not only is it less crowded, it’s also cleaner and less popular among pickpockets. The only downside being, it requires a longer trek from the city centre, in comparison to beaches like Barceloneta which is an easy 20-minute stroll from La Rambla a street in central Barcelona. Bogatell is an extra 15 minutes from here on foot or you can take a cab to reach in 5 minutes, but once you reach there the trip is well worth it.

Situated on Spain’s Costa de la Luz or Coast of light, Playa de la Victoria is the most famous urban beach in the Andalusian city of Cádiz. Located about a 15-minute walk from the historic centre the beach stretches in the modern part of the city. Playa de la Victoria’s bright blue, cool Atlantic water offers a welcome respite from the blistering heat that smothers the south of Spain. The beach is spacious and covered with golden sand is immensely popular with families. The beach has a boardwalk, almost two miles long flanked with an infinite number of beach bars, or chiringuitos serving grilled sardines and locally caught tuna and shrimp.

Valencia’s most famous beach Las Arenas has been blessed with some pristine golden sand and one of the best beaches in Spain. Originally named Playa de Levante or Playa del Cabañal it later became known as Las Arenas because it was home to the ultra-exclusive Balneario Las Arenas spa, which opened in 1898 as a healing center for wealthy Spanish families who came here to take wave baths. The wide, busy promenade that runs alongside the grand beach is packed with bars and restaurants and the water here is calm and shallow making it ideal for swimmers of all abilities. Valencia is also the birthplace of Paella so make sure you try some on your visit here.

By far the most happening island in Spain, Ibiza attracts tons of tourists during the summer. Home to some of the best nightlife the island attracts a unique mix of top DJs which in turn attracts die-hard partygoers. Its also home to some of the most exclusive rural getaways and wellness retreats. The part about Ibiza is that it’s home to some of the most iconic beaches in Europe, but perhaps the most iconic one of them all is Ses Salines. With crystal clear water and pristine cold sand, Ses Saline has a very laid-back vibe making it one of the best beaches to visit in Spain.

Located in southern Spain’s Carvajal is an urban beach that is popular with both local and visiting families. The water here is calm and the atmosphere as well, making it one of the most popular beaches in Spain. The beach was characterized by its coarse, dark sand and pebbles, and attracts tons of visitors both locals and travelers during peak season. Easily accessible by train or car or on foot the beach has a sunny boardwalk and a wide array of food and drink outlets, most of them specializing in seafood.

Also Read: Explore The Best Places To Visit In Spain

Have A Day In The Sun

From secluded coves surrounded by pine-covered cliffs to wide crowded spaces lined with plenty of restaurants, the beaches in Spain have plenty to offer and come in all shapes and sizes. Spain is home to several alluring beaches which adorn its extensive coastline. A visit to any of these beaches in Spain will be a perfect day out, so make sure these beaches are on your itinerary for a fine day in the sun.