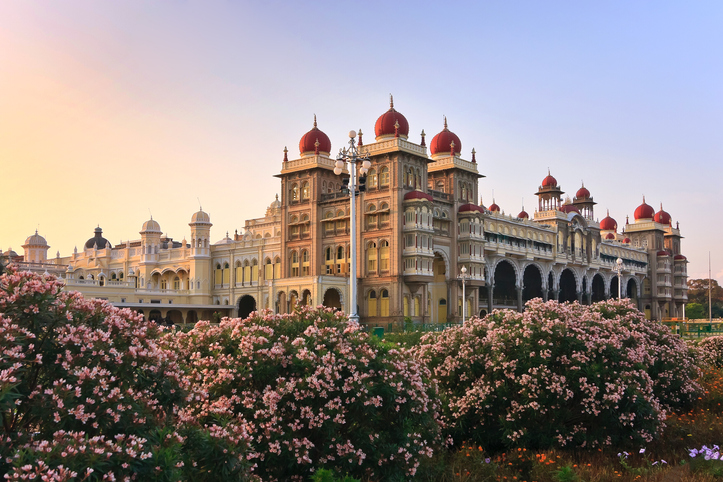 The state of Karnataka is filled with reminiscence of many empires and dynasties that ruled the area in the bygone era, witnessed today by the many historical monuments and places around. To name a few, the land was ruled by the dynasty of Badami Chalukyas, Rashtrkuta Empire, Mauryan Empire, The Nanda Empire etc. who left behind their rich history & culture enshrined in various places of Karnataka. It will be an interesting journey through times visiting some of these historical places in Karnataka.

We can begin our Journey into timeless rhythm from the very state capital Bengaluru, which has a number of historical places in and around the city. The majestic Bangalore palace is a must visit to witness the elegant and lavish splendor of one of the most powerful dynasties of South India, the Wadhiyars. The palace is still owned by the Wadhiyar Royal Family making it a prominent historical place in Karnataka.

Another historical place within easy reach in the city is the ‘Tipu Sultan’s Summer palace’ a magnificent summer retreat of the valiant ruler of Mysore – Tipu Sultan. The Palace depicts rich texture of Indo-Islamic architecture and is one of the most noteworthy creations of the ancient times. The Palace was referred as the ‘Abode of Happiness’ and ‘Rash e Jannat’ meaning “envy of Heaven’

Known as the ‘City of Palaces’, Mysore can be the next favorite destination to get a glimpse of the historical facts of Karnataka. The Mysore palace one of the most popular historical monuments in Karnataka, beacons you to delve into the life of Royalty. Also known as the Amba Vilas Palace, it is the former palace of royal family of Mysore and is still their official residence. The palace was built in the year 1912 for Wadhiyar dynasty and is counted amongst one of the biggest palaces in the country. The façade of the palace is a harmonious blend of Hindu, Muslim, Rajput and Gothic styles and is an incredibly breathtaking example of Indo-Saracenic style of architecture.

Other Historical places of Karnataka within the city of Mysore related to the Wadhiyar dynasty are, Jaganmohan palace and Lalitha Mahal Palace. Lalitha Mahal was built in the year 1921 at the orders of Maharaja Krishnaraja Wadhiyar IV of Mysore for stay of the then Viceroy of India. The architecture of the grand palace was inspired by St Paul’s Cathedral of London and stands as the most remarkable structure. The Jaganmohan Palace built in1819 is a spectacular edifice that has an illustrious history attached to its name. The palace held an important position in the administrative and legislative affairs of Mysore for a long period. The palace was converted as Art gallery in the year 1915.

Somanathapura is a tiny tranquil town on the banks of Holy river Kaveri and is considered as one of the oldest historical places of Karnataka. The famous Prasanna Chennakesava Temple known for the finest and most exemplary monument of Hoysala architecture is situated here. The Temple was built by the Hoysala Empire Kings and consecrated in the year 1258 CE. It is a Vaishnav Hindu Temple dedicated to might and beauty of Lord Krishna and said to be the climax development in Hoysala temple style unique in many ways.

Nanjangud is also known as “Dakshina Kashi” is a temple town located on the banks of Kapila river situated 23 Km from Mysore. It is considered as one of the historical places in Karnataka because of its famous Temple built-in 300-1000 CE during the reign of Ganga dynasty. Later on, renovations were also done by the Hoysalas. The Temple is built in the Dravidian style. It houses three main deities, Lord Nanjundeshwara, Goddess Parvathi and Lord Vishnu with Sridevi and Bhudevi. The Deity is considered as healer of diseases among the worshippers and the devotees who take a holy dip in the river Kapila as part of ritual to cleanse themselves of their ailments.

Srirangapatna is a small island town in the Cauvery River located 18 Kms from Mysore. The town is one of the important historical places in Karnataka as it is an architectural masterpiece of Hoysala and Vijayanagar styles evident in its monuments. One of the most important Vaishnavite centers of pilgrimage, the Ranganathaswamy temple dedicated to Lord Vishnu is situated here and it is one of the largest of its kind. The city was also once the capital of Hyder Ali and Tipu Sultan and has multiple sites of historical relevance. The Fourth Anglo-Mysore war was fought in Srirangapatna and the British consolidated the British Empire by defeating and eliminating Tipu Sultan.

Hampi the city of ruins is one among the most important historical places in Karnataka. Located on the banks of Tungabhadra River it was the capital of the Vijayanagar Empire in around 1500 AD. Surrounded by ancient monuments, captivating remains of Vijayanagar Empire Hampi is a must visit for a thoughtful peak into distant past. Hampi is famous for its massive, beautifully carved temples, especially the Virupaksha Temple, dedicated to the patron deity of the Empire. You can also find remains of the old aqueducts, canals and military barracks and stables reminding you of a glorious past.

Talakadu is a small mystical town situated on the left banks of River Kaveri. After several temples being excavated in the town, Talakadu has become a major historical place in Karnataka. The Town has been witness to the rise and falls of several great kingdoms including Cholas, Pallavas, Gangas, Vijayanagar and Hoysalas and depicts a glorious past and rich cultural heritage. It is famous for the Vaidyanatheshwara Temple dedicated to Lord Shiva. There are a number a temples that are buried under the sand and are excavated once every 12 years for special worship called ‘Panchalinga darshana’ comprising five major temples.

Mahakuta group of temples found in the tiny village of Mahakuta on the outskirts of Badami are unique rock-cut construction patterns of Chalukhyas built in the 7th century and listed as important historical monuments of Karnataka worth visiting. These temples combine the ancient architectural elements of the Dravidian and Nagara styles. The collection of Temples are devoted to Lord Shiva and the largest of the cluster is the Mahakuteshwara Temple. Apart from its religious significance, intricate design, and fascinating architecture, this temple cluster is important to historians due to two 7th century inscriptions found here. The Mahakuta Pillar inscription records the achievements and military expedition of the Chalukyas.

There are many other historical places in Karnataka besides above that would fascinate the visitors with glorious happenings of the past in timeless rhythm. Is there any that you have been to and we have missed out on? Let us know in the comments below.

Also Read: Have You Been To The Oldest Cities In The World?