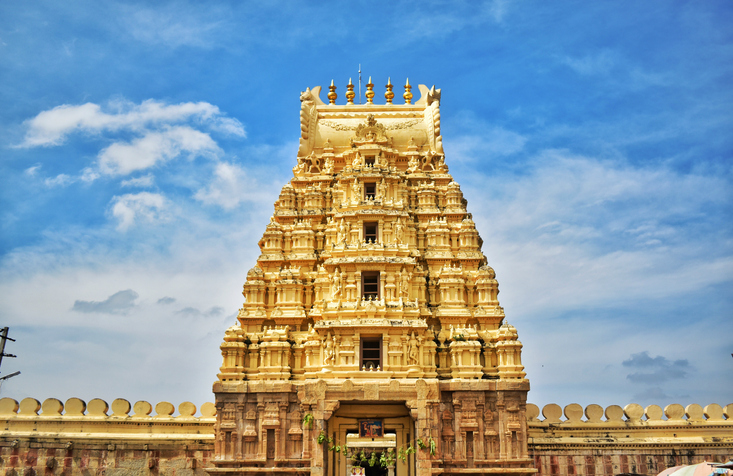 The historical island town of Srirangapatna is steeped in history, culture, religion and monuments. Srirangapatna or Seringapatam is a rocky island formed by the river Kaveri which is considered sacred. The Western Ganga Dynasty established the town in the 9th century. Since then, it has served as a base for several empires throughout history. Each of these rulers left their mark on the town, some in the form of palaces and others in the form of temples. The temples in Srirangapatna are not just pilgrimage centres, they’re architectural marvels from the past.

The town was ruled by the Ganga dynasty initially, until it became a viceroyalty under the Vijayanagar empire. The decline of the Vijayanagar empire paved the way for the Wadiyars of Mysore. Raja Wadiyar I defeated Rangaraya, the then viceroy of Srirangapatna, and wrested control of the town. The island fortress stayed a part of the Mysore Kingdom even after Hyder Ali wrested control of the kingdom from the Wadiyars. Srirangapatna served as the capital of the kingdom during Hyder Ali and his son, Tipu Sultan’s rule.

After the death of Tipu Sultan in the Fourth Anglo-Mysore war, the capital of the kingdom was shifted to Mysore. Srirangapatna was once again under the rule of the Wadiyars. Once upon a time, the island served as the capital of the Mysore Kingdom. Today, the old town is part of Mandya district in Karnataka. The town lies a mere 15 kilometres away from Mysore city on the Bangalore-Mysore highway (NH 275).

The 9th-century town is an important pilgrimage centre, especially for Vaishnavites (those who worship Vishnu). If you’re spiritually inclined or a fan of ancient architecture, then these beautiful temples in Srirangapatna are a must-visit.

Also Read: 10 fascinating things to see and do in Srirangapatna

The Four Temples In Srirangapatna That You Shouldn’t Miss

1. Sri RanganathaSwamy Temple: The Temple That Gives Srirangapatna Its Name

The island town of Srirangapatna gets its name from the Sri Ranganatha Swamy temple, built by the Ganga dynasty in the 9th century. This 1,400-year old temple is the oldest among all the temples in Srirangapatna. According to Hindu tradition, all the islands formed by the river Kaveri are consecrated to Ranganathaswamy (a manifestation of Vishnu).

The temple was originally consecrated by Tirumalaiah, a vassal of the Western Ganga dynasty in 984 CE. But the ancient structure of the temple was strengthened and improved over the centuries by the various rulers of Srirangapatna. The rulers of the Hoysala dynasty, the Vijayanagar empire, and the Mysore Wadiyars made several additions and renovations to the temple. Srirangapatna even served as an agraharam (place of learning) in the 12th century. It was granted to Saint Ramanujacharya (a Vaishnava saint) by a Hoysala king to be used as a place of learning.

Along with the beautiful ancient architecture, also notable is the idol of Sri Ranganatha in the temple’s sanctum. The idol is an exquisite sculpture of Vishnu reclining on the coils of the snake Adisesha, king of nagas (semi-divine beings considered to be half snake, half human). The snake’s seven hoods form a canopy on the god’s head. The temple has separate shrines inside for several other deities including Sri Ranganayaki, the divine consort of Sri Ranganathaswamy.

2. Nimishamba Temple: The Goddess Who Fulfils Wishes In A Minute

According to legend, Somavamsha Mutharasa King Muktharaja was blessed with a boon by goddess Nimishamba. According to the boon, the goddess would come to his aid in a minute, in his fight against demons. The idol of Shiva in the temple is called Moukthikeshwara.

The idol of the goddess in the 400-year-old temple is worshipped along with a Sri Chakra (Vishnu’s sacred wheel). A huge bronze bell is suspended from the ceiling in the mantapa. The high priest of the temple rings the massive bell at scheduled times every day after placing the bali bhojanam (offering to crows) on the bali peetham.

The temple conducts special pujas during festivals and people flock from all across Karnataka to attend them. Nimishamba temple also gets crowded during full moon days, when special pujas are conducted and food is served to the devotees for free.

3. Kshanambika Temple: The Goddess Who Grants Wishes In Just A Second!

The temple of Kshanambika Devi is another of the temples in Srirangapatna consecrated to the goddess Parvati. In the Kannada language, kshana means ‘a second’ and Ambika is a manifestation of goddess Parvati. This temple in the Srirangapatna fort is dedicated to another powerful goddess. According to the locals, the goddess is so powerful, she can fulfil her devotees’ wishes in just a second!

The idol of the deity and the Sri Chakra inside the sanctum are carved from stone. The stone Sri Chakra is believed to be a representation of the goddess Parvati. According to legend, this Sri Chakra, which is also called Sri Yantra, has the power to grant devotees’ wishes. The surface of the Sri Yantra is engraved with mantras, which are believed to radiate positive energy.

The deity is also known as Sri Chakra Vedanayaki Ammanavaru among the locals. The shrine is located in the Jyothirmaheshwara Swami temple. Whether you seek instant gratification or not, this temple is surely worth a visit.

4. Karigirivasa Temple: A Hike Away From Splendid Views

Just outside the island town of Srirangapatna is a hill called Karighatta. Karighatta means ‘black hill’ in Kannada. The Karigirivasa temple on the Karighatta hill is another one of the ancient temples in Srirangapatna. The word karigirivasa translates to ‘the one who lives on the black hill’. The temple on the Karighatta hill is consecrated to Srinivasa, a manifestation of Vishnu. According to legend, the great sage Brighu performed the prathishthapana (installation ceremony) of the idol.

The deity in the ancient temple is also known as bairagi venkataramana among the locals. A bairagi is a mendicant. According to local belief, the deity looks like a bairagi when the idol is decorated with flowers (alankara). The idol of the deity is carved from black stone. The idol of Srinivasa (Karigirivasa) is flanked by the idols of Yoga Srinivasa and Bhoga Srinivasa, without their consorts. On the western side of the temple lies the shrine of goddess Padmavati, the divine consort of Srinivasa. A statue of Garuda (the divine vehicle of Vishnu) faces the main temple along with a Garudasthamba (pillar of Garuda).

Of all the temples in Srirangapatna, this temple on the hill is the most arduous to reach. A winding, paved road leads up to the base of Karigiri hill. Devotees have to climb about 450 steps carved into the hill from the base to a flat hilltop to reach the temple. The Karigiri viewpoint nearby offers superb panoramic views of the island town and the river Kaveri. If you plan on spending some time here come prepared with some water and refreshments.

Also Read: How well do you know the interesting history of Srirangapatna?

Srirangapatna: A Town of Temples

Other than these four temples, the island town is home to several other temples. The island town also has temples of Sri Lakshminarayana, Sri Gangadhareshwara and Sri Jyotirmaheshwara among others. The temples in Srirangapatna are definitely worth a visit. These ancient sacred places of worship with beautiful architecture are unparalleled in beauty. Besides their spiritual significance, Srirangapatna’s temples are beautiful examples of the patronage of art and architecture of various rulers over centuries.