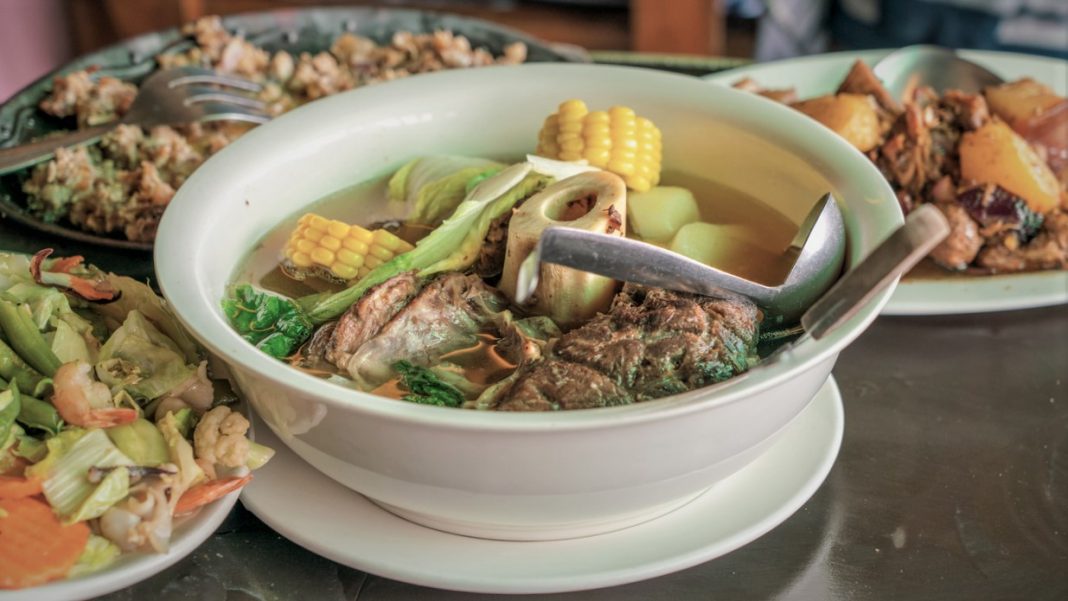 Filipino food may not be as renowned as other Asian cuisines, but the country offers some of the most delicious dishes cooked with delectable flavours and ingredients. Food in the Philippines is rich and diverse! It is influenced by  Spanish, Indian, Chinese and the Malay Kingdoms’ cuisines making it a multicultural delight. Here’s a list of some of the best dishes from the Philippines.

Adobo is one of the most popular dishes in the Philippines. It is prepared by stewing meat (usually chicken, pork, or a combination of both) in soy sauce and vinegar. If you want some added flavour you can garnish it with peppercorns and bay leaves!

This delicious stew is generally made with peanut sauce and oxtail. However, bits of beef are also sometimes added in. Kare-Kare is incomplete without a fermented seafood paste (bagoong) on the side!

In the city of Pampanga, the unique dish of Sisig is prepared with pork’s cheeks, head and liver. This appetizer has a crunchy, chewy texture, making it the perfect addition to a chilled glass of beer. It is usually served with a hot sauce.

A tasty, full-roasted pig with perfectly crisp skin and juicy meat is what this famous dish has to offer. You get the best lechon on the island of Cebu and it is almost always served at any grand Pinoy gathering or fiesta.

Also Read: Try Some Of The Best Street Food In Japan

Influenced by Chinese cuisine, Lumpia is a mouth-watering deep-fried spring roll. The roll is stuffed with a mixture of chopped vegetables and minced meat. A traditional Filipino dish, Lumpia is extra-delicious when served with the right sauces! It is generally eaten as a meal during lunch.

Pancit Guisado is a noodle dish that consists of sautéed noodles accompanied with sliced vegetables and meat (all cooked in broth, soy sauce, and fish sauce). The dish itself is supposedly a symbol for long life which is why it is considered essential at birthday feasts.

Bulalo, a steaming bowl of soup is the perfect companion for a rainy day. This delicious soup is made by slow-cooking beef shanks and bone marrow (still in the bone) in some water with fish sauce, onions, and peppercorn, and later adding in some vegetables. The province of Batangas in the country’s Southern Luzon region is especially renowned for this dish.

Thinly sliced beef is marinated in a mixture mainly soy sauce and kalamansi, fried, and then topped with caramelised onions to make the perfect Filipino beef steak!  The caramelised onions perfectly balance the strong salty and acidic tastes found in the meat.

The city of Bacolod has the best chicken inasal which is a type of flavourful grilled chicken. It sits in a special marinade of vinegar, kalamansi, ginger, and lemongrass. Its golden brown colour is thanks to annatto oil which is poured over plain rice and served with it. You can dip the chicken in some spiced vinegar for added flavour!

The Filipino ceviche, Kilawin is a seafood dish made with tuna and tanigue, which is then cured in vinegar. Onions are also added alongside chilli for an interesting mix of flavours. Kilawin is normally served as an appetiser with drinks!

Have we missed some of your favourite dishes? Let us know in the comments below!

Also Read: 14 Lip-Smacking Thai Dishes To Feast On when You Visit Thailand