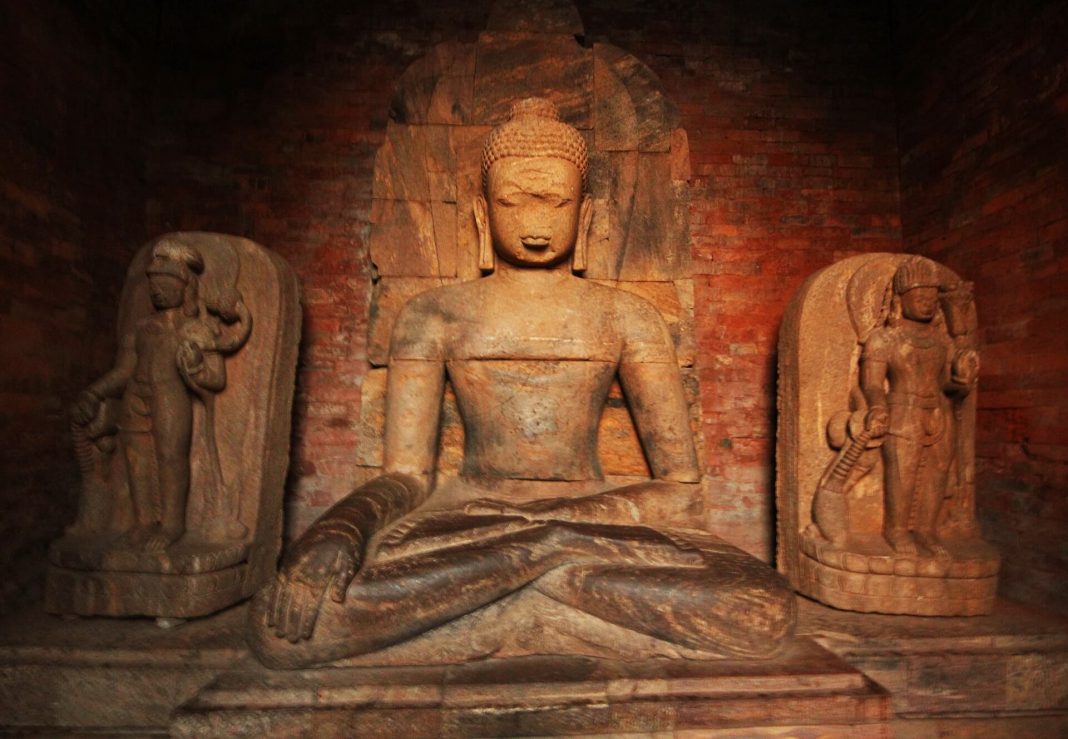 “Nirvana” in Buddhism refers to a condition of detachment, an aura of blissful existence, which liberates the soul from the cycle of rebirth. My visit to the excavated Buddhist sites from 7th century AD in Odisha would not promise such blissful liberation, but it offered a visceral experience of the state’s rich Buddhist heritage.

1Ratnagiri – The Origin Of Tantric Buddhism

View of the monastery in Ratnagiri

Probably the grandest of all excavated Buddhist sites in Odisha is Ratnagiri (it translates to ‘hill of jewels’ in Odia). It was the crown jewel of the Buddhist settlements in the state. Two huge monasteries have been unearthed with numerous sculptures, architectural fragments, artefacts and a large number of votive stupas. The construction of these started in the 6th century AD as an important centre of the Mahayana form of Buddhism and flourished until the 12th century AD. As per Tibetan author Pag Sam Jon Zang, Ratnagiri played an important role in the emergence of Tantric Buddhism and Kalachakratantra (a term used in Vajrayana Buddhism relating to ‘wheels of time’) during 8th – 10th century AD. It is interesting to note that the Tantric form of Buddhism has more than 18 million followers across Mongolia, Tibet and India (known as the Himalayan Belt). Thus, presumably, Odisha is the seat of Tantric Buddhism from where it propagated to the rest of the Indian subcontinent.

The intricately carved beautiful entrance of the first brick monastery in Ratnagiri is the most spectacular remnant of the place. More than two dozen colossal heads of the Buddha in various dimensions have also been unearthed. Walking amidst the ruins, I thought about how wonderful the place would have been during its days of glory. With closed eyes, I imagined an array of lamps lighting the monastery, the euphony of Buddhist chants emanating from the prayer halls, and child monks playing in the huge courtyard. Even with eyes opened, the amazing peace and stillness that permeated everything seemed surreal.

18 km from Ratnagiri, Lalitagiri is one of the earliest Buddhist complexes in India dating back to 1st century AD. Extensive subterranean investigations were carried out by the Bhubaneswar Circle of the Archaeological Survey of India from 1985 to 1991. Prominent structures excavated here include a huge brick monastery, the remnants of a chaitya (or prayer) hall, and a massive stone stupa (Mahastupa) on top of a rugged sandstone hillock. Many sculptures of the Buddha in different postures were found here. Inscribed potsherds, dating from the post Mauryan period to 10th -11th century were also unearthed. In 1985, during excavation, golden caskets were found in the stone stupa containing sacred bone relics. It is believed that these were of Lord Buddha himself. Hiuen Tsang, the legendary Chinese Buddhist monk, scholar and traveller has mentioned in his accounts the presence of a Mahavihara (stone stupa) on the top of a hill emitting bright light owing to its sacredness.

3Udayagiri – With The Stone Stepped Well

Udayagiri (Sunrise Hill) is 10 km from Ratnagiri and situated on the banks of the river Birupa. Located in a valley at the foothills of a crescent-shaped mountain, the remains consist of a huge monastic complex, a beautiful brick Mahastupa, two brick monasteries, a massive shrine complex, an ancient stone step well and various rock-cut sculptures. The Mahastupa contains seated images of Dhyani Buddhas in cardinal directions inscribed with Buddhist creeds dating back to 10th-11th century AD.

On the northern side, there is a double storied monastic complex made with bricks with a spacious courtyard (also called Udayagiri II). The complex contains a large figure of a seated Buddha, numerous cells, vaulted windows, an inner secret chamber, an upper shrine chamber on the first floor, and a brick water reservoir on the rear south-west corner, apparently used in the dry season.

The style of the buildings and analysis of the inscriptions across the monastery indicates that it was flourishing between 7th – 12th centuries AD. Several pots made of sandy clay have been found (possibly sourced from the nearby river Birupa). You will find many interesting samples of handmade or moulded pots, corrugated bowls, spouted vessels, lamps, storage jars, pans, basins and troughs with plain and intricately decorated lids.

The stone stepwell is the highlight of the place. There are a series of steps which lead to the well below. It is said that the water in this well never dries up. A remarkable fact considering that the well dates back to the 10th century AD. Effect of Bodhisattva? Maybe!

The legendary Kalinga War (the invasion led by Emperor Ashoka in 261 BC) was believed to have been fought on the banks of the river Daya (on the outskirts of Bhubaneswar). The monumental bloodshed had an adverse effect on the Emperor. He embraced Buddhism, a religion of peace, which led to subsequent patronage and propagation throughout India and abroad. Buddhism subsequently started spreading across Odisha after this invasion.

A peculiar thing to note is that all the important settlements and monasteries were built on hills. It seemed like a deliberate move to ensure the required seclusion for monks to reside, study and meditate.

The excavated sites reveal a world of which we had little knowledge or experience. With so much to explore and understand, I felt that a two-day trip wasn’t enough to appreciate the significance of the ancient sites. I wanted to visit again and know more. Following the footsteps of Buddhists who believe in many lifetimes, I think I will come back here another time.

Getting There: Located in Jajpur district, Ratnagiri is 95 km from Bhubaneswar through NH-5A (via Chandikhole). All the other sites are within 20 km from Ratnagiri. Daily flights fly from all major cities to Bhubaneswar.

Transport: Private cab service is the best option to visit these settlements. Packaged tours can also be arranged by the Government of Odisha tourist office. (Paryatan Bhavan, Lewis Road, 751014, Tel: (0674)2431299)

Paradeep is approximately 60 km from these settlements.