Shridhar is probably one of the most well-travelled people I have met – he has travelled to more than 107 countries across all 7 continents. He is a backpacker for life and has been inspiring many travellers through his journeys.

I spent an afternoon with him where he successfully changed my mind about my next holiday and convinced me to head to Iceland.  Here are some highlights of my chat with him – I’m sure you will be soon packing your bags to Reykjavik after reading all this great Iceland travel inspiration. 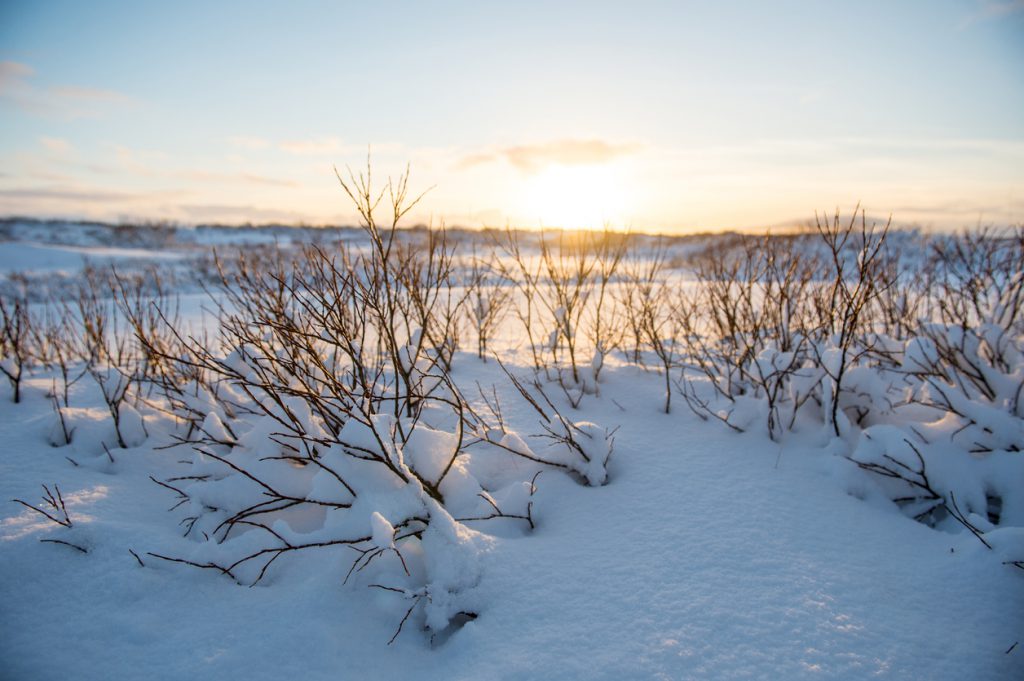 Coming from India, a land of 1.2 billion people in 3.2 million sq km, I found it fascinating to land in Iceland with a population of only 300,000 people living in 100,000 sq km. It’s the only country where I did not change money to local currency, as credit cards are accepted for even pennies. The country is beautiful and not in a generic sense, the landscapes are just outstanding. 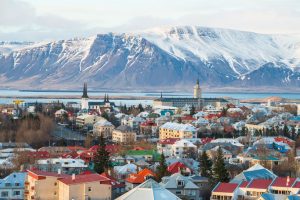 Cityscape of Reykjavík, IcelandThe biggest myth about Iceland (probably because of its name and location) is that it is insanely cold and will hardly have any sunshine. However, the country, unlike this perception, receives more sunlight than some countries on the equator.

It’s 300,000 citizens are warm and astounding. And with all its geothermal energy, its anything but cold. Even in December, the temperatures are a nice -2 to 2°C – warmer than New York and there are 5-6 hours of daylight unlike some of its neighbours. So, yes, unlike what you would think, Iceland is a perfect place to visit even in winter. Lastly, the country is seen to be extremely expensive, but its not that bad as long as you plan things ahead, like picking your alcohol from airport Duty-Free shops instead of buying it from bars. 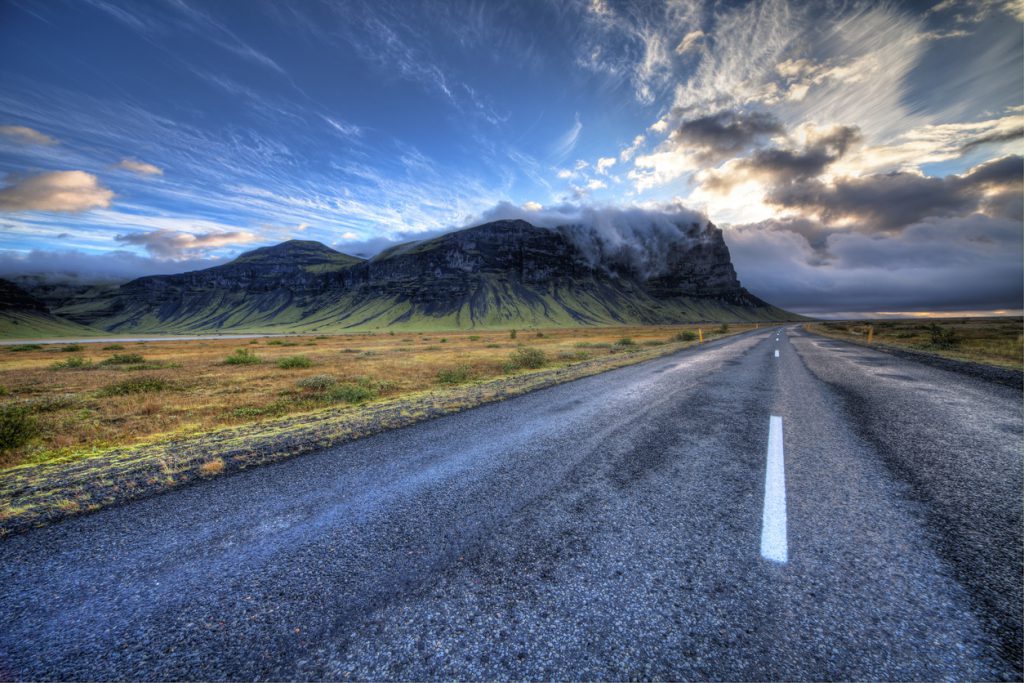 Mount Lomagnupur, southeast of Iceland.Iceland is beautiful but not in a regular sense, the landscapes are absolutely unique and change dramatically from place to place. It’s a land of waterfalls, hot geysers, fjords, highlands, rivers and glaciers. Driving trips in Iceland are common and it’s not that difficult to drive even with the snow. On the road, the sky and the land seem to dance the tango with each other to produce some soul-stirring sights.

The Northern Lights in Iceland… 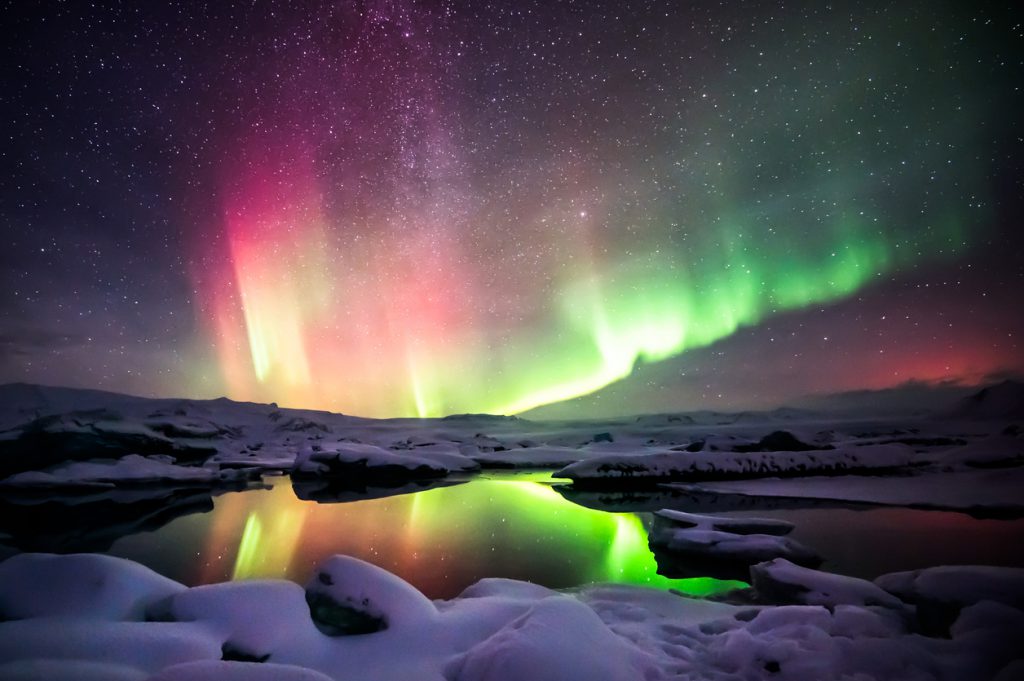 A beautiful green and red aurora dancing over the Jokulsarlon lagoon, IcelandOne of the biggest highlights of Iceland is the Northern Lights of the Aurora Bouralis. Iceland is one of the most under-rated but best places to view the show from – they have a viewing window of almost 8 months (from September to April)  the best part being, you can be based, in the capital Reykjavik and just go for the chasing tours unlike other countries where you have to travel far and wide to get a viewing. Here are some other places you can see the Auroras.

Before my trip, I serendipitously discovered that snapping the show was not a shoot and click affair. So I spent hours trying to understand photography jargon and camera settings. I even had learned how to set up a tripod.

However, on the field, I was so overwhelmed by techie inputs on camera settings that I gave up snapping after dozen coal black photos. So decided to enjoy the show rather than stress about snaps. Tripod set, aperture set, shutter speed set, focus set but no one told me to take off lens cap! The Eureka moment came too late at 1:30 AM by when the show was faint. 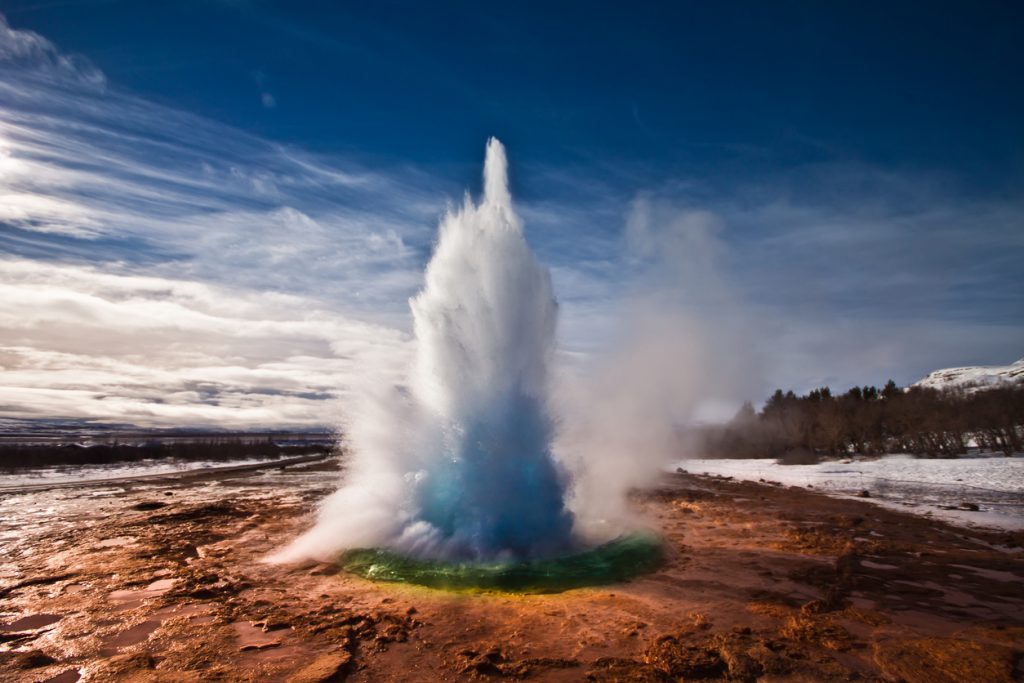 Erupting Strokkur Geyser on a sunny day in IcelandIceland is an hot bed of natural beauty. The natural geysers are a treat to watch especially when they spout with regular frequency. These geysers are formed when the groundwater comes into contact with hot bedrock and heats up, building pressure. When the water has reached peak temperature and pressure it sprouts out from the geyser, often up to 30m into the air. Its fun to watch normally hurried tourists wait patiently and excitedly for the volcanic bubble to build up and erupt.

The rift valley of Þingvellir is a site of historical, cultural, & geological importance. The rift valley marks the crest of the Mid-Atlantic Ridge – the rift between American and European plates. It is home to the largest natural lake in Iceland. The worlds first Parliament was established here in 930 and was held there until 1798.

A visit to the floating glaciers in Southern Iceland is a “must do before you die”. Like so many great beautiful things, it is not easily accessible. It takes a long 7 hour drive each way to get there. Of course, every nano-second is blissful. I did a  boat tour – sailing amongst the icebergs is both possible and truly breathtaking. Lonely Planet describes this site as “A ghostly procession of luminous blue ice-bergs …” and this has been the location for many scenes in some James Bond and Batman films. Words cannot describe this experience, you have to be there.

Chasing the Waterfalls of Iceland

Iceland is a land of waterfalls beautiful waterfalls. It’s a small island, but because of it North Atlantic climate that produces frequent rain and snow which forms large glaciers which in turn melt and feed rivers which result in whose summer melts feed many rivers a number of large and powerful waterfalls. You’ll find waterfalls everywhere in Iceland and of course there are some large ones like Gullfoss (Golden Waterfall), Seljalandsfoss and Nesjavellir that are absolutley worth visiting.

The Hot Pools of Iceland

Do not forget to carry your swimwear even though it looks like there will be no need for it. Iceland is spotted by many hot springs due to the geothermal activity, some of the hot springs are boiling hot but other ones are the perfect temperature to bathe in and it’s a very common traveller and local thing to do to take a dip in them.

The most famous one is, of course, the Blue Lagoon which is close to Reykjavik and is a fully functional spa. Whether you are a spa person or not you have to go here, and you can easily spend almost your entire day there.

Some fun facts about Iceland…

It’s amazing how one small island can pack so much punch for a traveller. If this doesn’t give you Iceland travel inspiration to book your tickets now, I don’t know what will… I’m off for sure!