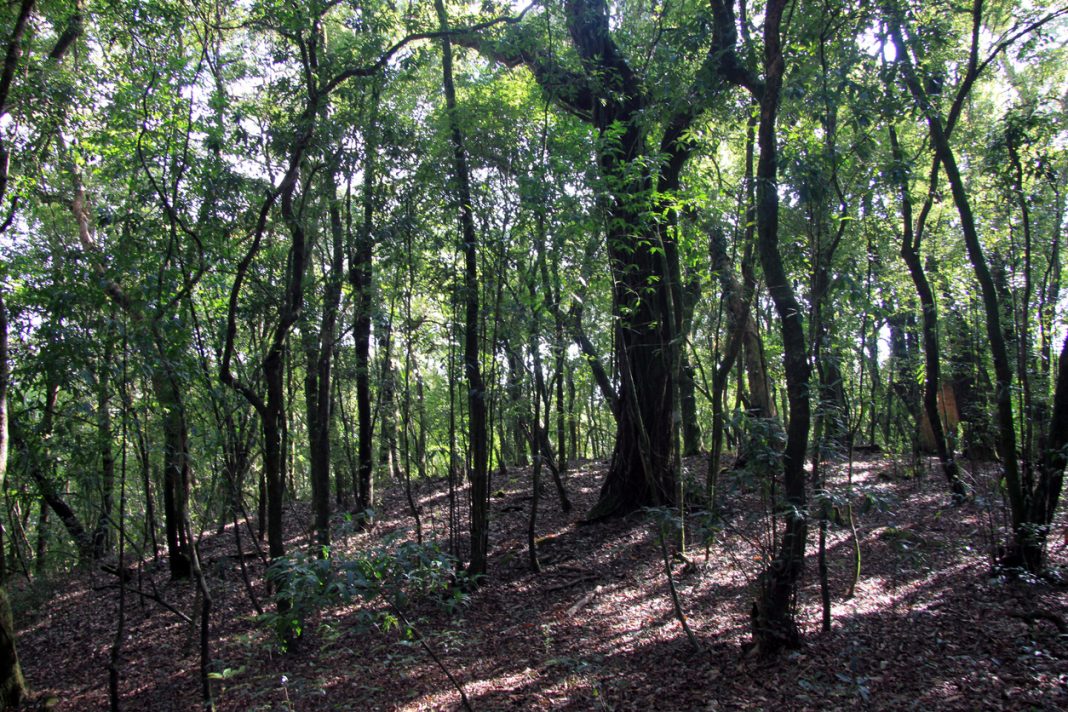 Located about 25km away from Shillong in the East Khasi Hills of Meghalaya, the Sacred Forest of Mawphlang (or Law Kyntang) is said to have stood for a thousand years. The reason why this forest remains a natural treasure is that cutting down any tree or even a branch is forbidden here. In Khasi culture, one of the most important aspects is the reverence for ‘sacred forests’. As a part of their religious beliefs, the tribal people have considered these forests as scared entities.

Therefore, these sacred forests have been preserved and nurtured by the Khasi tribals since ancient times through strict religious sanctions. The forest covers almost 192 acres of land and is believed to be protected by the local deity: Labasa. The natives believe that the deity guards this forest and their community from any misfortune. It takes on the form of a leopard when it is pleased but when it is upset it takes on the form of a snake.

Also Read: Meghalaya: Travel Guide to The Land in the Clouds

And yes, remember that you CANNOT take anything from the forest: not even a dried leaf! Removing even the tiniest object from the forest means you’re disrespecting the deity. It is believed that whoever has tried to break this taboo was punished with an illness; which has even lead to death. A local legend says that in 1970, the army once tried taking out some dead logs out of this forest; but they couldn’t leave as the truck refused to start even after trying multiple times. Scary, right?

Translating the name of the forest: Maw means stone and Phlang means grassy; so Mawphlang translates as the land of the grassy stone. The forest is now taken care of by the Lyngdoh Clan; and with its rich fauna, it is almost like nature’s own museum. The forest consists of rare medicinal trees and trees and rare flower species, including orchids. You’ll find English yew, Chinese sumac, chinquapin, carnivorous insect-eating pitcher plants, ferns, and mushrooms etc.

Mawphlang – An Oasis in the Grassy Deserts

Make your way into this eerily fascinating forest through a small entrance formed by the natural canopies of Rhododendron trees. Also, it is compulsory to hire a guide as you walk through this mysterious forest; so you can also listen to the stories about the forest and the practices of the people of Mawphlang. You’ll get to see many ritual sites used as sacrifice alters (to appease the local deity); and monolithic stones of different sizes.

These monoliths are arranged artistically and were used for seats during coronations or celebrations or simply for discussions. There will also be an infinite number of menhirs both inside and outside the forest. A Menhir is a tall upright stone erected in the memory of the dead elderly people (highly respected in the society for their knowledge).

While the standing menhir signifies a male, a horizontal stone slab supported on small stones signifies a female.

Also Read: Why You Should Visit Mawlynnong, The Cleanest Village in Asia

While walking on the humus carpeted soft forest floor you can see that the forest grows denser as you go further inside the forest. Due to the dense foliage, there is the magical play of light seeping through the thickets of leaves and branches that will show you the way.