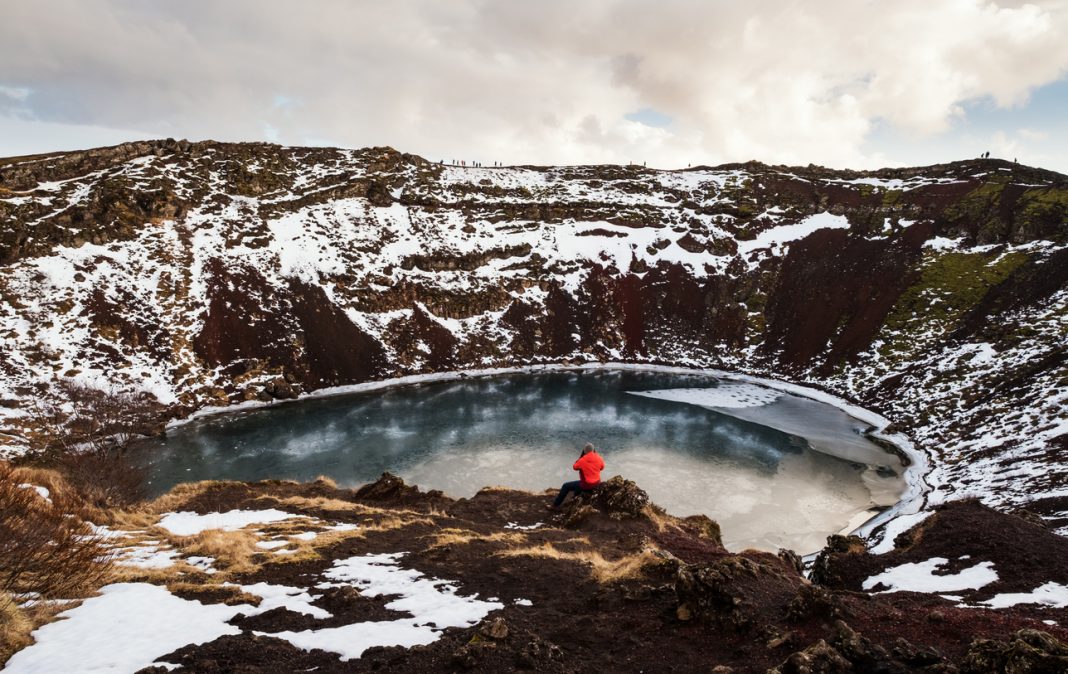 Iceland is also known as the land of Fire and Ice because of the constant battle between the freezing forces of glaciers, arctic weather and the explosive heat of the Icelandic volcanoes. Home to many active volcanoes, spouting geysers, thermal springs and frequent earthquakes, this country also gives you one of the most geologically diverse landscapes on earth.

Also Read: 6 Active Volcanoes You Can Actually See Up Close

While there are approximately 130 Icelandic volcanoes, only about 30 of them are active. Iceland has a long history of eruptions. This has resulted in an island of dramatic contrasts across a stark landscape. In Iceland, volcanoes define the nature of the land; creating endless fields of moss-coated lava, sweeping plains of black sand, jagged peaks as well as vast craters. While most of the volcanoes are inactive, you can visit these volcanic craters — a beauty like nowhere else.

One of the best preserved circular volcanic craters of the world, Hverfjall is situated near the eastern shore of Lake Myvatn in North Iceland. This 396m (1,300 ft) tall tephra explosion crater is just north of Dimmuborgir. It is a part of the 90km long Krafla Fissure area.

The crater is bare, circular and almost symmetrical which is about 140 meters deep and 1km in diameter making it one of the largest of its kind in the world. The crater is said to be 2800 – 2900 years old and resembles a black ash cone. Walk up the steep slopes and around the crater’s rim for otherworldly views of the surrounding landscapes but please stay on the paths and do not tear up the moss. It takes years to grow back. On reaching the top, you will be rewarded with stunning views of the Lake Myvatn area, Dimmuborgir rock formations and on a clear day, you can even see up to the south to Mt. Askja and Mt. Herdubreid, across the Odadahraun lava field.

Viti (meaning ‘Hell’) in Krafla is an explosion crater formed in 1724. It was created by a massive eruption in the Krafla volcano, known as Myvatnseldar, which lasted for five years. The diameter of the crater is around 300 meters and is one of the two most famous Viti craters in Iceland, the (other being Viti in Askja).

The explosion crater has an aqua blue lake inside it and is surrounded by nothing other than some power plant pipes and equipment. Therefore the aqua blue coloured lake gives us the most breathtaking sight with the contrast created with the surrounding white snow and dark mountains.

This is one volcanic wonderland that you should and must visit during your Iceland trip! One of the most amazing destinations in the Fjalllabak region, Rauðibotn will take you on a journey to another planet altogether. This red and green emerald is surrounded by the volcanic deserts and wastelands between Torfajökull and Mýrdalsjökull glaciers. It is a part of the gigantic Eldgjá craters, a chain of volcanic craters that came into being during the 934 AD eruption that produced one of the most prodigious lava flows ever recorded.

Rauðibotn is connected to the currently active monster Katla volcanic system centred under the Mýrdalsjökull glacier and is absolutely grandiose. The enchanting landscapes around the crater of Rauðibotn, along the Hólmsá River, will steal your breath away! As the crater’s heart appears, revealing a small emerald green lake surrounded by red rocks, you’ll also see Hólmsá to your left snaking in the middle of a foam decoration carved by the force of water. It is exceptionally beautiful and is believed to have inspired the descriptions of Ragnarrök in Völuspá.

The Askja region was created when a magma chamber collapsed beneath the picturesque Dyngjufjöll mountains. Falling in upon itself, the Askja region became a 50 square kilometre caldera within the Icelandic Highlands. The Askja Volcano erupted in 1875 and the force of this eruption blasted a new caldera inside the old one. After the cooling period, this new basin filled with glacial water which is now, a stunning opaque blue lake (Öskjuvatn) within the crater and is 11 km squared and 220 metres (722 ft) deep.

The small lake which was another result of the 1875 eruption is Víti. It a geo-thermally heated crater lake is approximately 25°C. This also makes it a popular location for passing travellers to bathe in this milky blue geothermally heated heaven. The region that surrounds these lakes is characterised by its jet black sand dunes; which also provides a striking contrast to the lakes’ serene blue shade.

This is a beautifully-formed crater that stands like a guard on the boundaries of the Snæfellsnes Peninsula and Mýrar in West-Iceland. The Eldborg crater, which literally means Fortress of Fire, is believed to have been at its most active some 5,000-8,000 years ago.

The hike to Eldborg crater covers 6 km and it takes around 1.5 hours to hike both ways. You can climb up and have a peek inside and also get a wonderful view of the other craters in this area. You’ll see that around Eldborg there are about 5 craters in a very short eruptive fissure; the Eldborg crater being the biggest one. Rising 60m above the surrounding lava, it is 200 m in diameter and 50 m deep.

The Burfell Crater is an old volcano located near Mt Helgafell; about 7,5 km from the town Hafnarfjordur and about 12 km. from Reykjavik the capital of Iceland. While this symmetrical crater is around 170 meters high, the lava, which ran from it about 7,200 years ago, branched into the bays Hafnarfiord and Skerjafiord. The road through the outdoor park of Heidmork can lead you to the beginning of a trail. This goes through the lava bank of the Búrfell crater. (Also known as Búrfellsgjá, which means the Crevice of Búrfell.) The walk also passes through this green-grey moss-topped lava bank up to the crater.

Rising about 170 meters above the ground, Grabrok crater belongs to the volcanic system of Ljosufjoll. It can be easily accessed via a footpath. As the crater is quite steep, steps have been built on part of it to make the hike easier. This volcanic crater is located east of Lake Hreðavatn in the fjord of Borgarfjörður in West Iceland. Spread over a distance of 90 km, it is also the largest of three craters (Stora Grabrok, Grabrokarfell and Litla Grabrok); it was formed about 3400 years ago in a fissure eruption.

Visit this neon blue lake located in southern Iceland along the so-called Golden Circle. Sitting in a volcano surrounded by rare red volcanic rock, Kerid crater lake is unique among other crater lakes. Its caldera is believed to likely not have formed from an explosion as most do. When the magma in the centre of the volcano simply depleted itself, and the empty chamber beneath caved in, the Kerid Lake was formed.

Regardless of the geological frivolity that led to the lake’s creation, its bright rainbow of colours range from the most striking red to black to the most beautiful azure. Kerið belongs a row of craters called Tjarnarhólar and is 270 m long, 170 m wide and 55 m deep. Take a walk around this scenic lake or just walk down to the lake itself. Lose yourself in this privately-owned lake. But remember, the land-owners charge Icelandic Króna 400 for admittance; this fee is used for maintenance of the area.

Also Read: 44 Breathtaking Natural Phenomenon You Have To See Before You Die

Add these beautiful Icelandic volcanoes to your itinerary. And let us know about your experiences in the comments below!