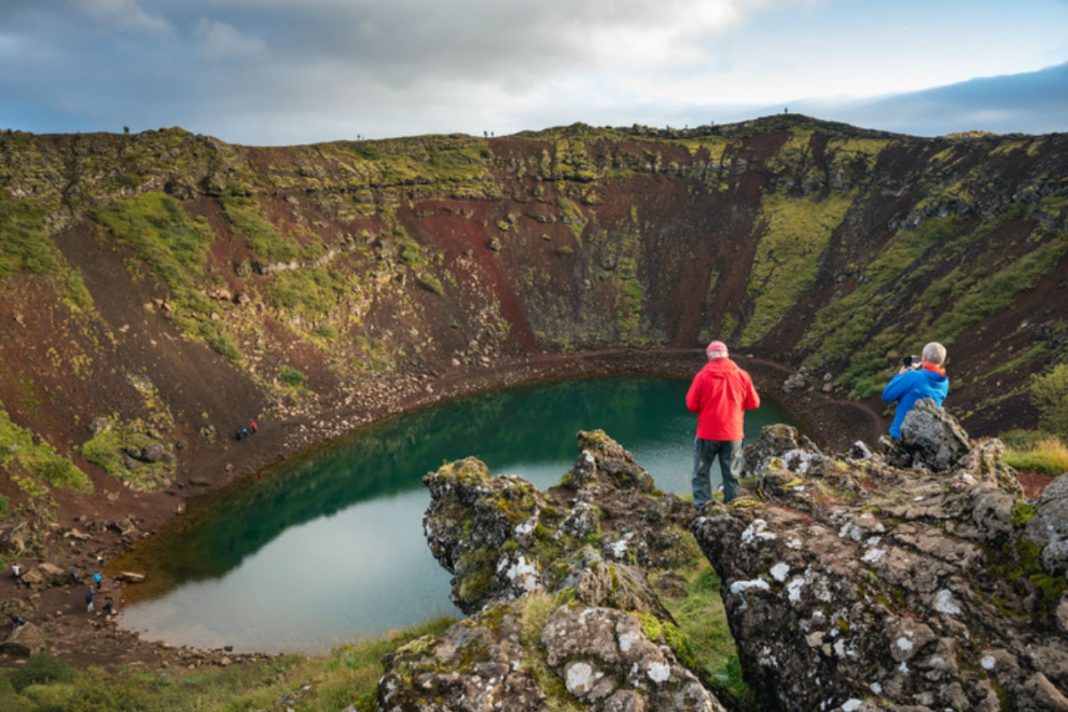 A lake that is formed in a volcanic crater or caldera, such as a maar; that may form in an impact crater caused by a meteorite or in an artificial explosion caused by humans—is termed as a Crater Lake. After the crater is formed, rain, run-off, groundwater circulation, or melted ice fills in it with water, creating a Crater Lake.

Appearing nothing less than majestic, unique and mysterious, these lakes form as precipitation within the rim fills the created depression. The water level rises until an equilibrium is reached between the rates of incoming and outgoing water. Sources of water loss singly or together may include evaporation, subsurface seepage, and in places, surface leakage or overflow when the lake level reaches the lowest point on its rim.

Most commonly formed lake craters are due to volcanic activities and the crater lakes covering active (fumarolic) volcanic vents are known are Volcanic Lakes. The water within these lakes is often acidic, saturated with volcanic gases, and cloudy with a strong greenish colour. On the other hand, the crater lakes that cover old or non-active volcanoes have clear fresh water. Here is a list of 11 Wonderful Crater Lakes from around the world that should be in your Bucket list!

At 1949 feet, Crater Lake of Oregon is the deepest lake in the US and is formed in the caldera of Mount Mazama after an eruption about 7000 years ago. This well-known crater lake of Oregon, USA is located in the caldera of Mount Mazama. Since it is fed solely by rainwater and melting snow with no inflow or outflow at the surface, it has exceptionally clear fresh water.

This Crater Lake is fed solely by falling rain and snow, and hence is one of the clearest lakes in the world.

Kelimutu volcano contains three different crater lakes of varying colours. One of the striking summit crater lakes is Tiwu Ata Mbupu (Lake of Old People) which is usually teal blue and is the westernmost of the three. The other two lakes are- Tiwu Nuwa Muri Koo Fai (Lake of Young Men and Maidens) and Tiwu Ata Polo (Bewitched or Enchanted Lake), that are separated by a shared crater wall. The colours for these two fluctuates between red and green.

This lake trio on Kelimutu is of interest to geologists because they are of different colours despite being on the crest of the same volcano. The chemical reactions between lake minerals and changing volcanic gases are the reason behind these colour changes.

Quilotoa is the western-most volcano in the Ecuadorian Andes and has a water-filled caldera that is some 3 kilometres wide. The caldera was formed by the collapse of this dacite volcano following a catastrophic VEI-6 eruption about 800 years ago. This volcanic activity produced pyroclastic flows and lahars that reached the Pacific Ocean and spread an airborne deposit of volcanic ash throughout the northern Andes.

The Crater Lake is now 250 m (820 ft) deep and presents a stunning panorama with its green and turquoise tint. This distinct colouring is a result of dissolved volcanic minerals remaining from its past eruptions. The lake floor contains fumaroles and the eastern flank of the volcano has several hot springs that attest to its continuing geologic activity.

Sitting on the border between the Yamagata and Miyagi Prefectures in Japan, Mount Zao is one of the most prominent volcanoes in the Tohoku Region. While there are a number of active volcanoes in the region of Northern Honsh, the central volcano includes several lava domes and a tuff cone (Goshiki-dake), which contains a crater lake named Okama. It changes colour depending on the weather and is therefore also called the ‘Five Color Pond’. Formed by a catastrophic volcanic eruption in the 1720s, this turquoise lake is 360 metres (1,200 ft) in diameter and 60 m (200 ft) deep.

The eruption of lava from Novarupta Volcano led to the creation of Mount Katmai caldera in 1912. Mount Katmai is a large stratovolcano (composite volcano) on the Alaskan Peninsula in southern Alaska and has a central lake-filled caldera. The caldera is about 3 by 2 mi (4.5 by 3 km) in area.

This remote Crater Lake measuring about 10kms in diameter is a perfect example of Nature’s handiwork. It is located within the Katmai National Park and Preserves. Furthermore,  the caldera rim reaches a maximum elevation of 6,716 feet (2,047 m).

At 2797 m, Mount Ruapehu is the highest volcano on mainland New Zealand and also one of the world’s most active. This active stratovolcano is situated at the southern end of the Taupo Volcanic Zone and includes three major peaks. These peaks are- Tahurangi (2,797 m), Te Heuheu (2,755 m) and Paretetaitonga (2,751 m). There is a deep active crater lake resting at the centre of these 3 major peaks that fills with water between major eruptions.

The lake is estimated to be around 100 m deep and has a width between 500 and 600 m. Depending on the lake’s colour, you can gauge the volcanic activity (changing its appearance with temperature). While green tones signify colder temperatures, darker tints may indicate the temperature of water to rise over 50°C.

Visit this neon blue lake located in southern Iceland along the so-called Golden Circle. Sitting in a volcano surrounded by rare red volcanic rock, Kerið crater lake is unique among other crater lakes. Its caldera is believed to likely not have formed from an explosion as most do. When the magma in the centre of the volcano simply depleted itself, and the empty chamber beneath caved in, the Kerið Lake was formed.

Regardless of the geological frivolity that led to the lake’s creation, its bright rainbow of colours range from the most striking red to black to the most beautiful azure. Kerið belongs a row of craters called Tjarnarhólar and is 270 m long, 170 m wide and 55 m deep.

Lying on the border between China and North Korea, Heaven Lake was formed due to a volcanic explosion. This led to the creation of a caldera atop the volcanic Baekdu Mountain, and Heaven Lake lies within this caldera.

Although it was formed in 969 AD, this gorgeous lake now has an average depth of 213 m (699 ft). This pristine, precipitation-fed lake has a surface elevation of 2,189.1 m (7,182 ft) and covers an area of 9.82 km². It is sited partly in Ryanggang Province, North Korea, and partly in Jilin Province, northeastern China. While planning, do remember that this lake is typically covered with ice from mid-October to mid-June. 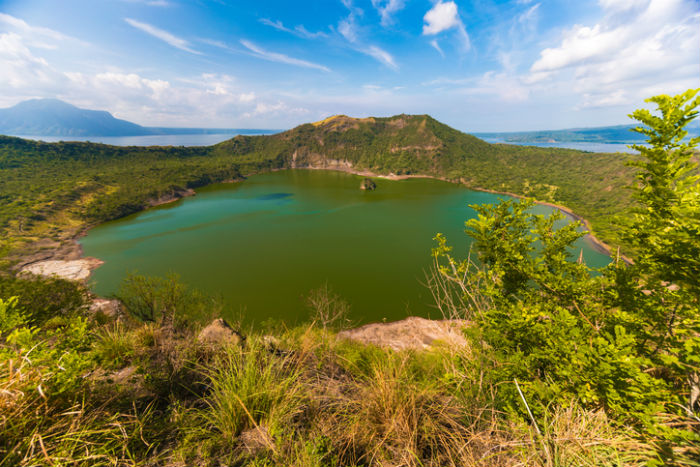 Taal Volcano is a multifaceted volcano located on the island of Luzon (Philippines) but also is also one of the most active and dangerous volcanoes in the Philippines. This volcano is in the middle of Taal Lake which partially fills Taal Caldera. The Caldera was formed by powerful prehistoric eruptions between 140,000 to 5,380 BP.  Located about 50 km (31 mi) south of the capital, Manila, it is known to be one of the most picturesque sights in the Philippines. The Vulcan Point (one large rock) that rises from the surface of the crater lake was the remains of the old crater floor that is now surrounded by the 2 kilometres wide lake. This lake is now referred to as the Main Crater Lake.

So, hang on a minute! Let’s see if you can follow this: Vulcan Point in the Philippines is cited as the world’s largest island within a lake (Main Crater Lake) that is situated on an island (Volcano Island or Taal Island) located in a lake (Lake Taal) within an island (Luzon). EEESSSSHHHH! We’ll give you some time to figure that out.

The Askja region was created when a magma chamber collapsed beneath the picturesque Dyngjufjöll Mountains. Falling in upon itself, the Askja region became a 50 square kilometre caldera within the Icelandic Highlands. The Askja Volcano erupted in 1875 and the force of this eruption blasted a new caldera inside the old one. After the cooling period, this new basin filled with glacial water is now, a stunning opaque blue lake (Öskjuvatn) within the crater. This crater lake is 11 km squared and 220 metres (722 ft) deep.

The small lake which was another result of the 1875 eruption is Víti. It a geo-thermally heated crater lake is approximately 25°C. The region that surrounds these lakes is characterised by its jet black sand dunes; which also provides a striking contrast to the lakes’ serene blue shade.

Lake Pinatubo was created after the eruption of Mount Pinatubo in the Philippines on June 15 1991. This climactic eruption led to the formation of a caldera. At first, the caldera was small, hot and highly acidic, and a temperature of about 40 degrees but later, with abundant rainfall, the temperature cooled down and the pH was also normalised. The rainfall also resulted in the formation of the deepest lake in the Philippines at 800 m (over 2000 feet). Located near the boundaries of Pampanga, Tarlac and Zambales provinces, it is about 90 km (56 mi) northwest of the capital city-Manila.

So add these natural wonders to your itinerary and do let us know about your experiences in the comments below!