Hinduism is one of the world’s oldest religions in the world and has over 900 million followers worldwide. But while most of the Hindus live in India, there are substantial numbers present in South Asia, Nepal, Fiji, Mauritius, and Trinidad & Tobago. Hence, you’re sure to find Hindu temples not just in India, but these regions as well.

So here we have a list of stunning Hindu temples from all around the world, gloriously standing and pouring blessings over mankind:

The world-famous Angkor complex is a UNESCO World Heritage site that stretches across more than 400 square kilometres. It contains hundreds of temples and structures dating back to the Khmer Empire.  The most famous of these is Angkor Wat (meaning “City Temple”), one of the top things to see in Cambodia. Built-in the 12th century by King Suryavarman II, this beautiful and majestic temple rises to a height of 669 feet.  The temple took 27 years to complete the construction and was first called “Varah Vishnu-lok”. It went through many changes in religion converting between Hinduism to Buddhism several times.

Also Read: 11 Of The Best Things To See In Cambodia 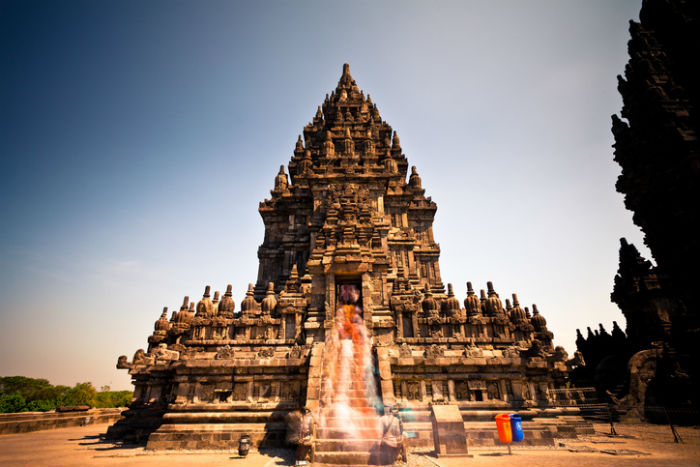 Prambanan is the largest Hindu temple complex in Indonesia also one of the biggest in Southeast Asia. Located about 18 km east of Yogyakarta, this UNESCO World Heritage Site was built around 850AD by the Mataram Kingdom, rulers of central Java. It has three main temples dedicated to Vishnu, Brahma, and Shiva; and in fact, is Indonesia’s largest construction dedicated to Shiva. The complex also has smaller shrines which are 250 in number and decorated with the natural ornaments. 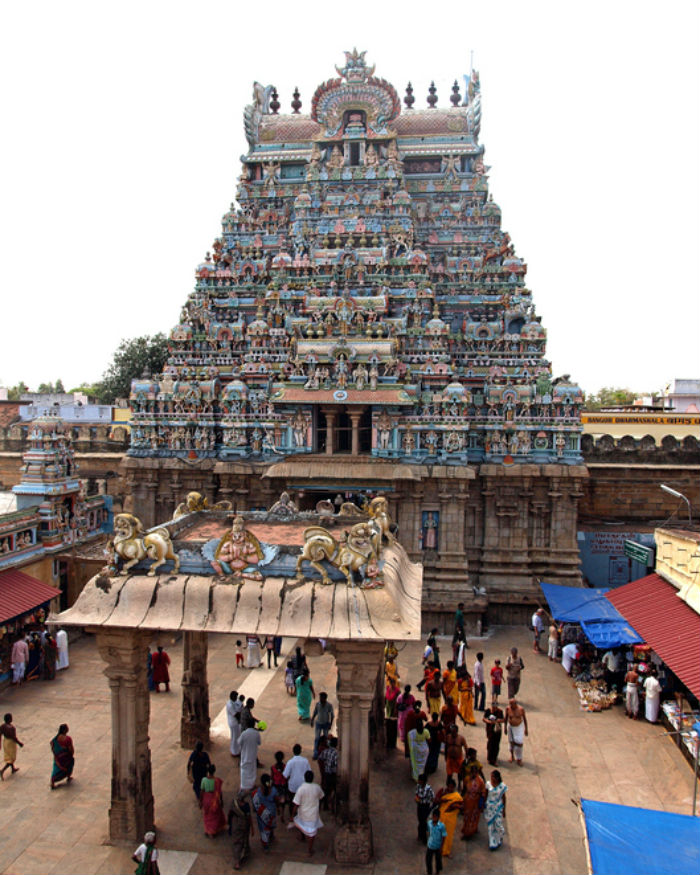 This magnificent temple is the largest Hindu temple in India and is dedicated to Lord Ranganatha (a reclining form of Lord Vishnu). Also known as Arulmigu Ramanatha Swami Temple, it is located in Srirangam, Tamil Nadu. With an area of 156 acres (6,31,000 m²), the Sri Ranganathaswamy Temple is one of the largest religious complexes in the world and one of the finest Dravidian religious structures in India. It was constructed in the 10th century and receives millions of visitors and pilgrims every year.

Set offshore, this Hindu temple is one of the most famous Hindu temples in Bali, and probably the most photographed. Built on a large coral rock, sunsets should not be missed at this temple. It is located on the coast of Beraban village in the Tabanan regency and one of 7 sea temples, each within eyesight of the next, to form a chain along the south-western coast of Bali. Soak in the enchanting beauty of this old Hindu pilgrimage site set on top of an outcrop in the midst of always gushing waves. 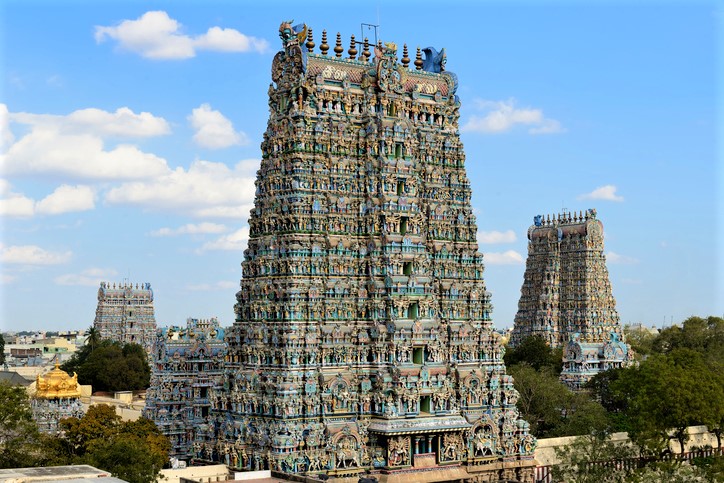 Located in the holy city of Madurai, the Meenakshi Amman Temple is one of the most important Indian Hindu temples. Built in the early 17th century, this temple is dedicated to Meenakshi (a form of Goddess Parvati) and Lord Shiva who is in the form of Sundareswar. The complex houses 14 magnificent towers including two golden “Gopurams” for the main deities, which rise to a height between 40 and 50 meters. These ‘gopuras’ or pyramidal gates are elaborately sculptured and painted. Four of tallest gopuras stand as entrances of the temple while the smaller gopuras direct to the main shrines. 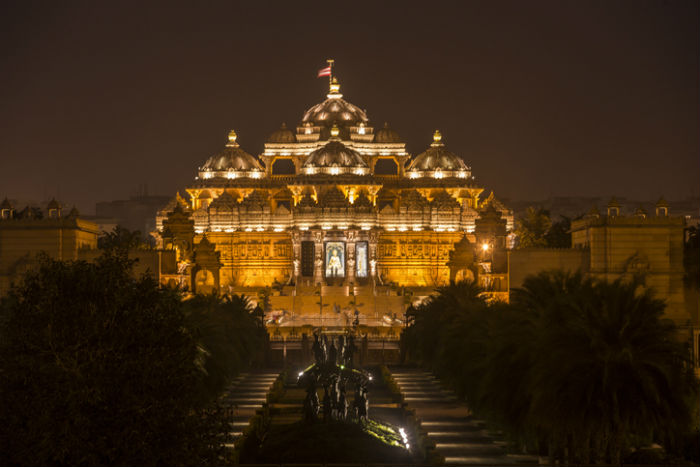 Akshardham Temple is a Hindu temple located on the banks of river Yamuna that looks at Swaminarayan’s life. It is constructed from pink-hued Rajasthani sandstone and Carrara marble; contains over 200 murtis – objects depicting deities. This spiritual campus was opened in 2005 but the most interesting fact is that it was built with the 300 million volunteer workers. described as an eternal place of devotion, purity, and peace, this temple is perfect for sightseeing, exploring and pilgrimage. The boat ride at this place is mesmerizing. 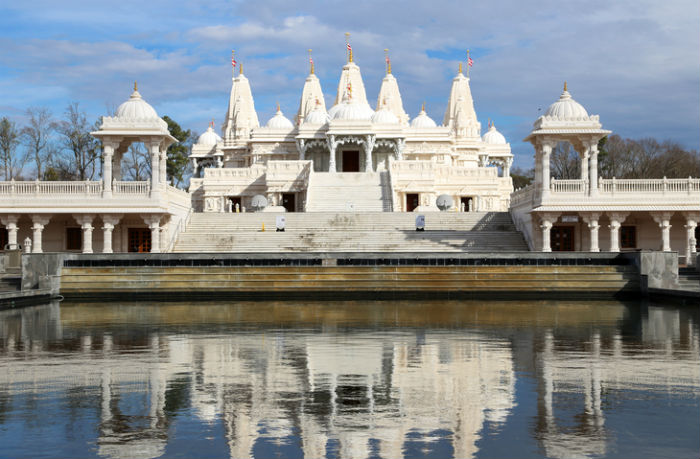 This stunning temple is situated in the north-west of England’s capital city and considered as a modern miracle. Standing some 70 feet high, this temple is made from 5,000 tonnes of Italian Carrara, Indian Ambaji marble and the finest Bulgarian limestone. It was completely carved by hand in India before being moved to London. It’s known to hold superlative Diwali celebrations which are open to all and includes a fireworks display with hot snacks.

This dazzling temple is situated at the foot of a small range of green hills at Malaikodi village, 8 km from Vellore in Tamil Nadu, India. It is built using copper covered in multiple layers of gold leaf, inside a star-shaped complex wall. The salient feature of this temple is the Lakshmi Narayani Temple or Mahalakshmi Temple whose “Vimnam” and “Ardha Mandapam” is coated with pure gold both in the interior and the exterior of the temple. This stunning temple dedicated to the goddess Lakshmi and is home to extensive gardens and intricate architectural detailing. 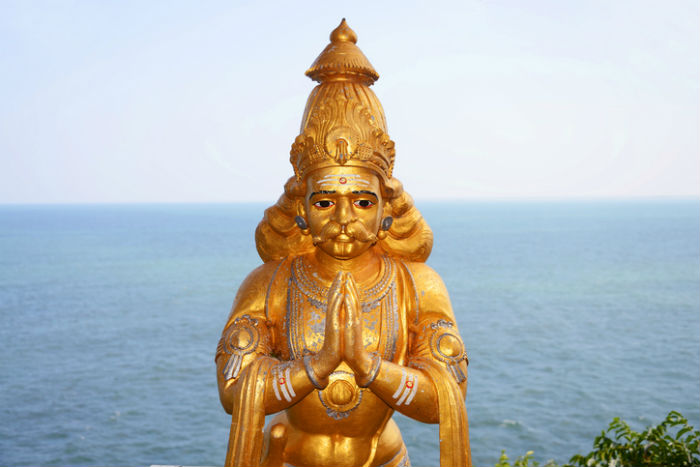 Thirukoneswaram, or the Holy Koneswaram Temple, is a Hindu temple located atop Swami Rock, a promontory overlooking Trincomalee, a port town in eastern Sri Lanka. It is the main temple of Lord Shiva as well as Ravana, whose statue stands out over one side of Swami rock. The complex was constructed almost 2000 years ago. However, it was destroyed by the colonial invaders in an almost 17th century, before being rebuilt. 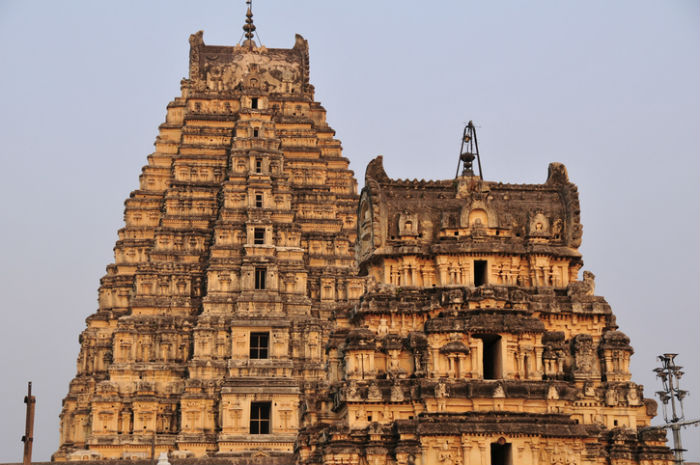 The Virupaksha Temple located in the city of Hampi in India is part of the Unesco World Heritage site of the “Group of Monuments at Hampi”. This temple started out as a small shrine and grew to be the last capital of the Hindu Kingdom of Vijayanagar. While it is believed that the temple has been functioning uninterruptedly ever since the small shrine was built in the 7th century AD, it became popular among travellers between the 14th and 16th centuries. The largest entrance tower of the temple is 50 meters high.

If we have missed out on any of your favourite Hindu temples, do let us know in the comment below!