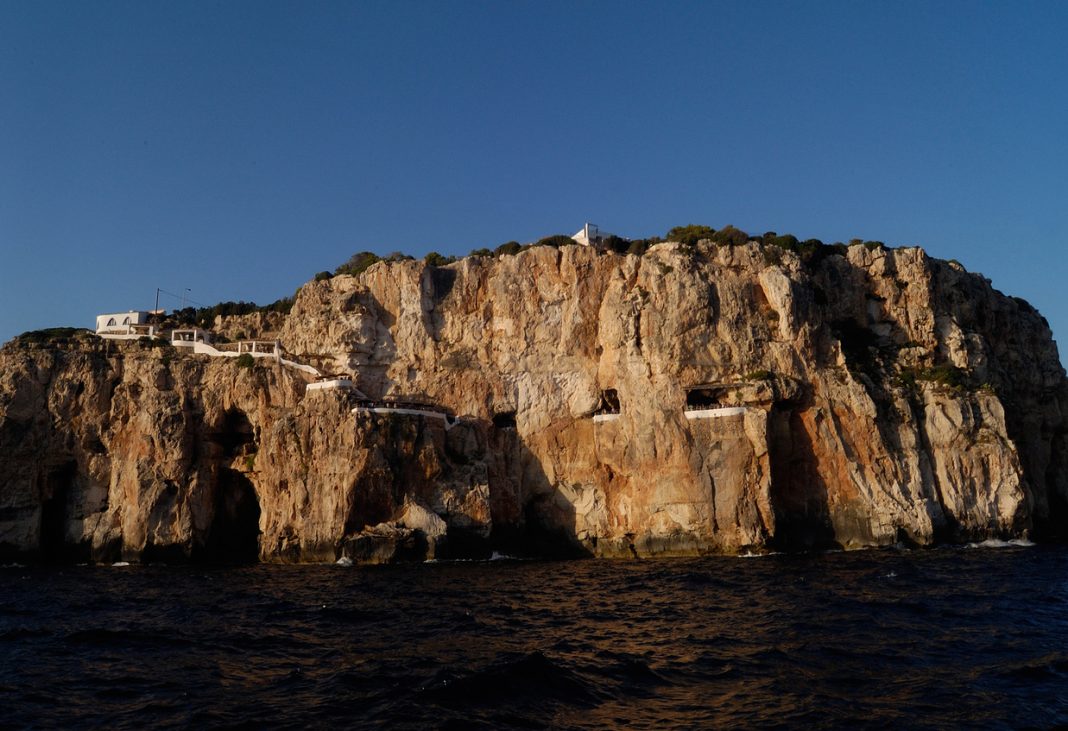 Do you ever hear about something in a faraway place and instantly think “Nah, as if that’s real”? I’m talking about Aladdin’s Cave or Atlantis or any other mythical place that fills you with wanderlust and makes you want to instantly pack your bags, before you then come to the realisation that this is just common folklore, a common legend that couldn’t possibly be true. That’s exactly what went through my head when someone told me of rumours that there is a hidden night club in Menorca, on the side of a cliff, in a cave…

When I set sail for Menorca (via Easyjet), the images were rushing through my mind of a hidden cave that only backpackers could get to, a party destination that was well known among the local hippie community and the island hoppers of the area. It was named “Cova d’en Xoroi,” in the town of Cala en Porter. Oh, so secretive and oh so exciting. Or so I thought…

The “Secret” Party Cave In Menorca

In my head, I was going to have to hike for miles and miles to see if this place really existed. I was expecting to ask local people about this mysterious cave club in Menorca, and for them to respond with a wondering expression, for even they wouldn’t have heard of it. Oh, how wrong, silly Lauren. When I landed and grabbed a tourist information brochure, what was on the front page? Only one of Menorca’s most well-known tourist locations, Cova d’en Xoroi. IT WAS EVEN SIGNPOSTED FROM THE MOMENT YOU LEFT THE AIRPORT.

The magic was gone. I was heartbroken. ‘Yay, it exists’, I thought, but I was also sorely disappointed that I wasn’t going to have to pay a troll to cross a forbidden bridge or commandeer a donkey in order to get there. There was a road that led straight to it and there was even PARKING OUTSIDE.

Okay, drama over. Once I got over the fact that this club in Menorca was in no way a secret, I decided that I still wanted to go and check out the nightclub in a cave. I mean, give it credit, it is still a cool concept. Luckily, the week I arrived there was an end of season party happening, and we managed to get tickets for free via Facebook (handy tip).

We arrived at 9 pm, just as the sun was going down; and I have to say, I was absolutely blown away by how stunning this place was. You walk through the reception, which is beautifully lit with lights that are set into the rock, and on the left is a gift shop with local things from the island. Then you walk down some steps to the most stunning view of an endless sea, and the sun is setting right in front of you. It is such a cliché, but it genuinely took my breath away.

Oh, my stars, it got even better. You walk down a path which I can only describe as being like a scene from Mamma Mia, beautifully white painted stone and arches, with driftwood as railing. There is so much attention to detail. The lights in the floor are made from sea glass and are all different colours which create a rainbow effect on the white stone. WE’RE NOT EVEN IN THE CLUB YET.

Down and down you go, walking down what is essentially the stairway to heaven, the music gets louder and you start to see the huddles of people on the balconies, under the white canvas canopies, which look like sails. It’s so classy. There are VIP areas and people are in sectioned off booths which have a direct view out onto the sea, and they’re sipping champagne and chatting away about yachts and whatnot. After this section, there is a dark tunnel which is where you first enter the secret cave club in Menorca.

Dancing In The Dark

It is seriously dark, guys, But, when your eyes adjust, it is what I can only describe as mad cool. The sea glass LED light effect continues, only this time it is in the ceiling and the walls, and there are more booths and bars which create a bit of privacy. After this section, there is an opening and the cave gets a lot bigger, which is the space for the main dancefloor. This is where it all happens. There is even a stage for live music, (which was incredible when we were there, by the way) and a huge glassless window which has an amazing view of the sea. And, when it gets dark, the sea is just illuminated by the moonlight and the party lights from the cave. Awesome stuff.

Guys, I don’t think I need to persuade you further on this one. This bar/club is insane, it may not be mythical, but it certainly is magical. It is also open in the daytime for live music and cocktails while you watch the sunset, and then after 9 pm the party begins! If anything, it is also a beautiful example of ambitious architecture (if you’re into that kind of thing).

So, go now! If you needed a reason for a spontaneous getaway to the Balearics, this is it!

GO FORTH AND PARTY.